Dak Prescott might not be the flashy option but he isn’t someone you should dismiss if you are trying to win your league. 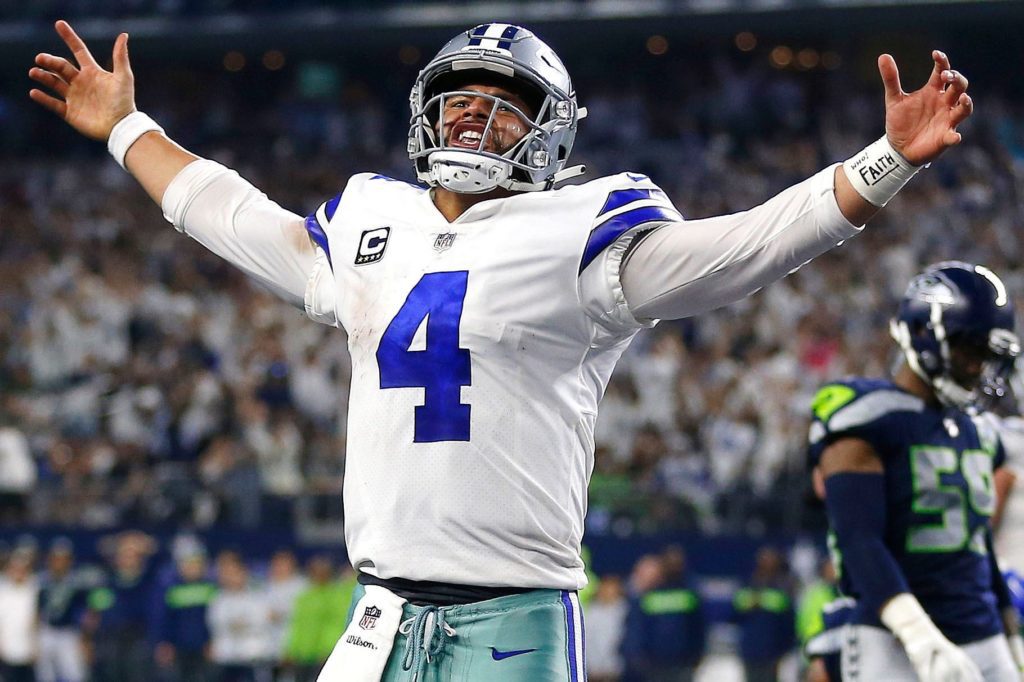 2021 was a fantasy disappointment for Dak Prescott. Entering the season, he was considered a top-5 quarterback even after missing the majority of the previous year with his gruesome ankle injury. After ending the season as the QB9, there is much left to be desired for the Cowboys quarterback in 2022.

Before suffering the calf injury against the Patriots on the game-winning play, Prescott had thrown for 1,813 yards with 16 touchdowns and only four interceptions. He was on pace for an MVP-caliber season, and his fantasy managers were excited about what he was on pace to accomplish. After a “down” season, he totaled 4,449 passing yards, 37 passing touchdowns, 10 interceptions, and a passer rating of 104.2.

Coming into the 2022 season, Prescott will be without his WR1b– Amari Cooper. The Cowboys traded Cooper to the Cleveland Browns for a fifth-round pick and a swap of sixth-round picks. However, Prescott will still have plenty of familiar faces returning.

Michael Gallup suffered a torn ACL at the tail-end of last season but was brought back on a long-term deal. Emerging tight end Dalton Schultz was also brought back as he had the $10.9 million franchise tag placed on him. CeeDee Lamb is more than capable of leading the wide receiver room and will continue to work towards establishing himself as a top wide receiver in the league. James Washington was brought over from Pittsburgh and signed to a one-year deal. The Cowboys also used their third-round pick in the 2022 draft to bring in the Southern Alabama receiver, Jalen Tolbert.

Ezekiel Elliott and Tony Pollard are the two staples in that backfield. Last year, Zeke saw a career-low in targets with 65, hauling in 47 of them, and Pollard brought in 39 of his 46. With Cooper now out of town and Gallup set to miss the beginning of the season, these running backs will look to see an uptick in targets from Dak.

The Cowboys led the NFL in neutral pace last season and will look to continue that as they head into 2022. He does not have the same rushing upside he had at the beginning of his career. The uptick in passing volume is a positive for his fantasy managers.

In terms of dynasty, Prescott is a locked-in top-10 option at the quarterback position. His production in the NFL often goes under the radar since he does not have the high upside as some of the other quarterbacks around the league. However, his consistency is what helps managers win championships.

What Should You Do With the Cowboys Offense?

Although Cooper is no longer a Cowboy, Dallas does have a lot of fantasy-viable starters on its offense. Lamb and Schultz should finish the season within the top-10 of their respective positions. Gallup’s return is still uncertain. However, when he does return, his familiarity with the offense should allow for a smooth transition back in. Washington and Tolbert are new to this team. Both offer a specific skill set that a Prescott-caliber quarterback could help unlock throughout the season. While they might not be reliable each week, they are undoubtedly worth a look in deeper formats.

At the end of the day, Dak Prescott is one of the more undervalued quarterbacks you can have in dynasty leagues. While the rushing upside is no longer there, what he can produce through the air puts him in the conversation for a top-8 dynasty quarterback heading into 2022.

The Cowboys have invested a lot in and around Prescott. An alpha wide receiver in CeeDee, a reliable tight end in Schultz, and a strong backfield put him in a prime spot to succeed. As he continues to move further away from the ankle and calf injury and another season under Mike McCarthy and Kellen Moore, Dak should continue to make strides in his offensive game. The price to acquire him is at an all-time low.

Here are some recent trades for Dak on the DynastyGM feature should you be looking to acquire him for your dynasty roster.

*All trades are based off 12 team Super Flex leagues*

Jameis Winston, Elijah Moore, and a 2023 2nd for Prescott

Kirk Cousins and two 2023 2nd round picks for Prescott

Make sure you subscribe to the #NerdHerd, where you get exclusive content, dynasty/rookie/devy rankings, buy/sell tool, and a bonus podcast too. Dynasty Nerds also recently launched the #DynastyGM tool, a complete game-changer in the fantasy industry. We truly are your one-stop-shop for all your fantasy football needs!

Draft Day Digest: How to build a Superflex team from the 1.02
Hollywood Brown – Resurgence in the Desert?  
Training Camp Sale!