The 2023 quarterback class may have a new face in Michael Penix Jr. This group in the Summer had so much potential, and has been fading lately. Penix throws his name in the ring as a potential draftable QB. 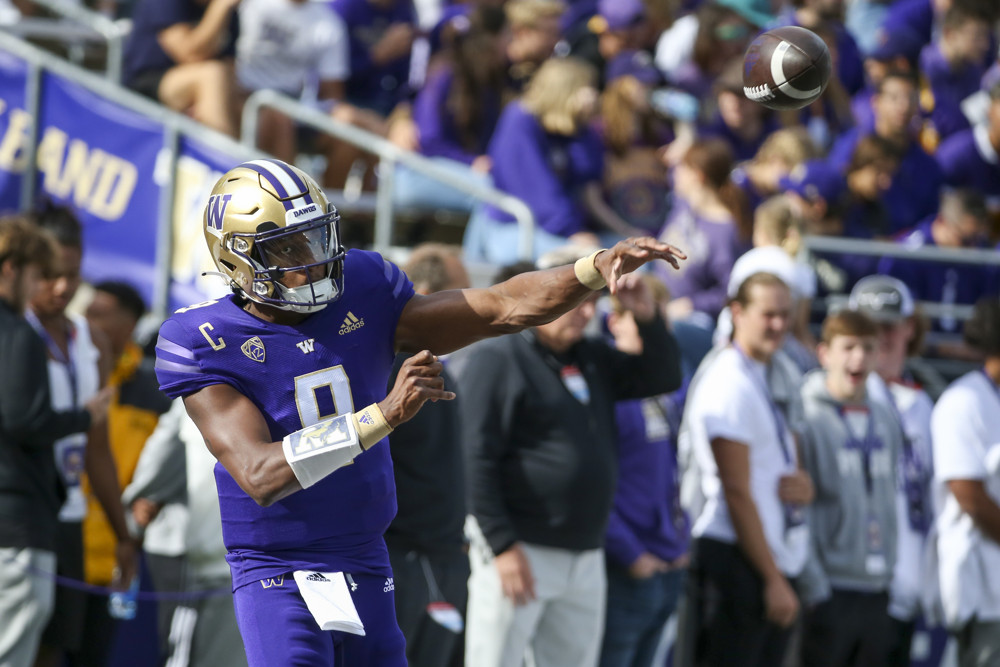 The 2023 quarterback class may have a new face in Michael Penix Jr. This group in the Summer had so much potential. Now, a month into the college season, we have seen stocks rise and fall.

Despite this class doing its best Dogecoin impersonation, there is hope. C.J. Stroud and Bryce Young look to be the part and then some. Will Levis is this year’s Malik Willis, where you love him or hate him. Top off this group with the emergence of players like Hendon Hooker, Jaren Hall, and now Michael Penix Jr., and you have a deep class again.

The name that is the lead in this piece is one everyone knows. For three years now, Penix has been in the news cycle. He led Indiana to its best season arguably ever before tearing his ACL. He followed that up by tearing his ACL the next year as well. After those two Brutal years, he finds himself in Washington doing more than just raising his draft stock.

Penix was not supposed to be the starter for Washington. They had secured their highest-rated quarterback recruit in Sam Huard back in 2021. Many people expected him to take the reigns with the new year, except he never did. Penix came in with his veteran presence, won the job in camp, and has not looked back.

After delivering a year to remember in Indiana, he is now priming the Washington Huskies for the same. In this game against Michigan State, they came into unranked and as home underdogs. Penix was familiar with the Big Ten program and was able to lead them to a major upset. He had the Huskies out front early, and they never looked back. With that, his draft stock took off, much like the team.

It’s funny; so much of what Penix was doing at Indiana has somehow remained despite the knee injuries. He isn’t as much of a runner as he was before, but he has become much better at reading defenses and being patient. Where he would tuck and run back, he now makes progressions and extends plays while keeping his eyes downfield. Mechanically this process needs work, but it is there and is something teams can develop immediately.

The other thing that stood out in this game was Penix’s ability to make big throws. He made one fantastic deep ball throw just before the half ended, which set the Huskies up for a score. Later on, he pulled off the play you can see above where he pump-faked the pass rusher and rolled out to hit his guy. He has not been rattled by anything; he knows this is a fresh start. Doing what he is doing and demonstrating the type of trust he is speaking to his professionalism.

The bottom line is so much of what he did in this game is a microcosm of the season he is having. Penix has proven he is a more than qualified NFL quarterback prospect.

Consider it a snobby thing but seeing his mechanics as a lefty, they just extend his motion. Tua Tagovailoa is the most famous lefty quarterback playing presently. It took him getting to the NFL and now having a successful season, despite Thursday’s ugly injury, for people to stop talking about it. The left-handed throwing shouldn’t matter to teams, but it will. Right or wrong, that is where things are with the NFL and its evaluators.

From a film perspective, Penix makes big-time throws, which also means he takes chances. He has just one interception on the year, but he has a knack for slightly under-throwing receivers, and if corners were in a better position, that number would be higher. In the NFL, the speed will be twice what it is now. Leading your receiver in your throw is the difference between a Tim Tebow to Demaryius Thomas situation versus a pick-six going the other way.

Penix is a challenging study, but the season is in its infancy. The ACL tears and being left-handed will be discussed with him. If teams can look past that and give him a chance, then perhaps there is something to be had. Overall, his style and mechanics remind me a lot of Colin Kaepernick, but the former 49ers quarterback perhaps had a stronger arm. Accuracy will be big for him the rest of the year; cleaning up his mechanics and getting a quicker ball to his guys would do wonders for his evaluation.

For now, enjoy the ride he is taking the Huskies on and enjoy the devy discourse around him.