Zach Evans has proven to be a more than fun running back to watch but what makes him that way? @MandrewNFL breaks that down in his latest Devy Game Report. 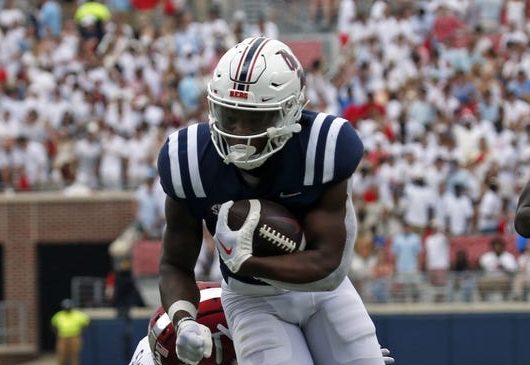 The brotherhood of the traveling Zach Evans fanbase seems to have finally found its college home. In his debut for Ole Miss, running back Zach Evans left fans super excited for the season ahead. He dominated the Troy defense to start the year and is the focus of today’s devy game report.

The former 5-star recruit had initially committed to Ole Miss before de-committing and heading to TCU last minute. He never seemed to find his footing for the Horned Frogs and eventually was put in a split role with Kendre Miller. He would enter the transfer portal before heading back to Ole Miss in Lane Kiffin’s offense this time.

Last year the nation saw the Ole Miss offense explode in the passing game but never in the rushing aspect. Zach Evans looks to fix that this upcoming season and is off to a good start after this game.

There are few stories or headlines to monitor heading into the game against Troy. A lot of the Ole Miss offense was lost to the NFL the last two years, so they have had to rebuild it. The transfer portal helped a ton, landing Zach Evans, among others.

While Troy may not be a powerhouse or even a defensive juggernaut, this was a good gauge to see the usage he may get throughout the season. He would end up getting a total of 22 touches and having a total of 152 yards.

Two things proved to be the difference for Zach Evans in this game, patience and vision. The patience he displayed at the line waiting for blocks to develop made his job much easier. The vision would then pop up on film when he would make a cut to his blocking lanes. He didn’t show any issues running into his linemen or getting stopped at the line by defenders. Time and again, he found himself on the outside, breaking off big runs.

He demonstrated excellent footwork when he could get to space on the outside or up the middle; using his ability to make quick and decisive cuts when running made the Troy defense look lost at times. They haven’t got into the SEC part of their schedule yet, but they will. When they do, if Evans can keep this up, he may enter early day two conversations of the NFL Draft.

One thing I wish we had seen from Zach Evans in this game, and his career, is his breakaway speed. Several times in the game against Troy, Evans would have a chance to score long touchdown runs but didn’t have that next gear. In the NFL, speed is crucial to a running back’s success, no matter the system. Evans will need to develop that, or he may have a tough go of things in the NFL. While it isn’t damning to him as a prospect, it is worth monitoring as the year progresses.

If Evans can’t break the long runs, he needs to develop strength and contact balance for when he does engage defenders. He lacks power in his running style, which can be fixed by adding strength as he matures. Adding strength to his style and frame will end up doing him wonders.

Zach Evans is a great college running back. He can be a great NFL running back. If the league has shown us anything lately, it is that he needs to have a complete game ad build. At this point, Evans doesn’t have that. His film is great, and teams will love it. He just needs to show what he can do against SEC defenses, and it could be enough to convince a team to give him the reigns. Otherwise, we could be looking at a James Cook situation.