The 2023 RB class receives a lot of hype, rightfully so. Can the 2024 class find itself in the same category? @Fanatics_Rich looks at 3 possible breakouts in 2022 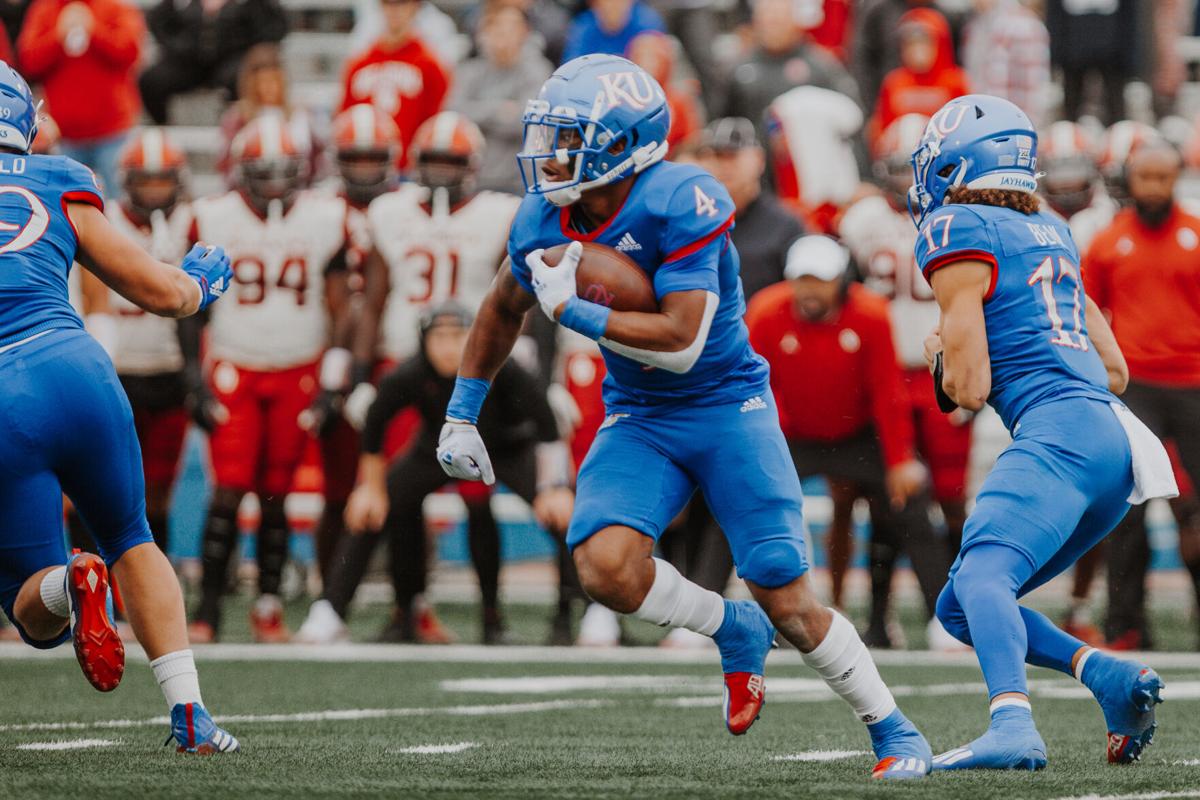 The 2024 RB class is off to a great start after one season. Breakouts from top-tier players like TreVeyon Henderson (Ohio State), Will Shipley (Clemson), and Braelon Allen (Wisconsin) highlight the class thus far. As the 2022 College Football season approaches, others will look to emerge. Let’s take a look at three players that could do just that!

Devin Neal is a former 3-star Recruit (247 Composite) from Lawrence, KS. He chose his hometown Jayhawks over offers from Iowa, Kansas State, Nebraska, and Oklahoma State.

Kansas Head Coach Lance Leipold is entering year two with the Jayhawks. Another off-season to fully implement his running back friendly offensive system. Ranked 119th in run blocking according to PFF, the Jayhawks will look to solidify the offensive line.

Neal is looking to build on a strong true freshman season where he rushed for 707 yards and eight touchdowns. He improved as the season went along with strong games against Big 12 opponents Iowa State, Oklahoma, and Texas. Neal shows excellent patience in allowing blocks to develop in front of him. He notices rushing lanes well, with good acceleration to get to the second level and apply pressure on linebackers. He shows the ability to create on his own when the offensive line is unable to maintain blocks.

With the strong season, there are areas where Neal has to show improvement. Only having seven receptions last season is the biggest concern. This could be a product of the offensive system as there were only 14 receptions for RBs, Neal did show soft hands on the few receptions he had. He also needs to improve his yards after contact, another year in a College weight room should improve this.

Neal is in line to be heavily involved in an offense that produces top-end RBs. The offensive line should be much improved with another year of training, which will open more running lanes.

Raheim “Rocket” Sanders is a former 3-star Recruit (247 Composite) from Rockledge, FL. He had 34 offers, several being from top-tier Power 5 programs. Sanders decided to take his talents to the University of Arkansas.

The Razorbacks operate in a run-heavy offensive system, running the ball 65% of the time during the 2021 season. Head Coach Sam Pittman operates under an “Old School” mentality where an effective running game opens up the Play Action passing game. As a result, Arkansas has transformed the program over the last few years under Pittman, becoming a contender in the loaded SEC West.

Sanders has prototypical size at 6’2” 225 LBS, ideal for a 3-down RB at the NFL level. With his frame Sanders can move the pile, falling forward for extra yards. He shows the ability to find small creases in the line, getting small to get through traffic. In the open field, he shows good speed with the ability to outrun players taking poor angles. Another strength is his ability to set up his cuts, he adds pressure to a defender keeping them off balance before cutting. The rushing ability of QB KJ Jefferson prevents defenses from focusing on the RBs, this opens additional running lanes.

Sanders will need to increase the number of targets in the passing game, in year one he had 11 receptions. Another aspect Sanders needs to work on is his consistency on a play-to-play basis. He shows the ability to identify holes and small creases but then misses a hole entirely and runs into traffic. This issue will improve with increased reps and as the play slows down due to experience.

Sanders is in line for a very productive 2nd season in Fayetteville. He should see a sizable increase in touches as he establishes himself as the #1 option in that rotation. His ceiling may be capped due to this rotation, however, the ability to stay fresh should increase efficiency on a per touch basis.

Montrell Johnson is a former 3-star Recruit (247 Composite) from New Orleans, LA where he went to De La Salle High School. Johnson decided to stay in-state and chose the University of Louisiana and Head Coach (HC) Billy Napier. After his breakout first season, Johnson followed HC Billy Napier from Louisiana to the University of Florida.

The University of Florida brought in new Head Coach Billy Napier from Louisiana this off-season. The task is to rebuild a Gators program after a sub-par 2021 season. The biggest change is implementing the run-heavy offensive system used by Napier. In recent years this scheme rotates two RBs, while also utilizing a QB with rushing ability.

Johnson finding himself on this list may come as a surprise. In year 1, while with Louisiana, he had 838 yards and 12 touchdowns. He is the only RB on the roster that knows the nuances of the offensive system. He drives through contact well while also utilizing good pad level. Johnson shows good speed, however, he is not considered a “Home run threat”. Reports from spring indicate Johnson performed well and appears to have adjusted to his new team just fine. During the spring game, he received the bulk of the touches, as he was getting reps with both offensive units.

There are a few additional concerns with Johnson compared to the other two. Like the others, Johnson was rarely used in the passing game, only amassing six receptions. Moving from the Sun Belt Conference to the SEC is a significant improvement in competition, there may be an adjustment period early in the season. He has a tendency of stuttering as he approaches the hole, this indecision will lead to negative plays in the SEC.

Johnson should be the lead back in the rotation with a few guys waiting behind him for reps. With a strong start to the season he could be in store for a big year. This would catapult him up draft boards heading into his third collegiate season.

With a new season, comes a new opportunity! The 2024 class is far from settled, players jockeying for every opportunity possible. With spring camps ending, we are left waiting until fall to catch a glimpse at who will win position battles. Keep an eye on Neal, Sanders, and Johnson as the fall progresses and look for news of them seizing control of their respective backfields. This news will be your indicator that a breakout is imminent.