Braelon Allen left high school early and decided to dominate college football at 17, @MandrewNFL breaks down the young mans game as he looks to take the next step. 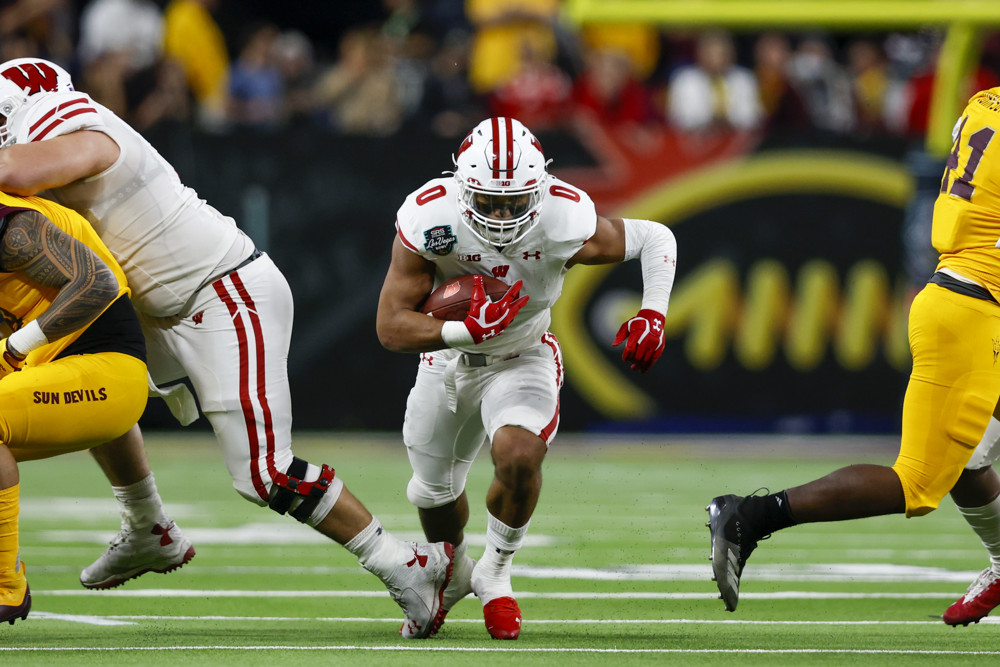 Most 17-year-olds are more focused on their first job or getting good grades; Braelon Allen didn’t have that luxury. Instead, he was analyzing and playing against Big Ten defenses.

I can’t remember a player coming in at age 17 and dominating in the fashion that Allen did at Wisconsin. His recruitment and high school career took a unique turn, which we will get to, allowing this to happen. He is already physically imposing, proving to be the real deal, and may be one of the most underrated devy assets.

Wisconsin Has Its Own Derrick Henry

Before we get into the comp listed above, let’s see how this unique high school career unfolded. Allen was a Wisconsin native and was classified as a Wisconsin recruit in this past 2022 class. However, he graduated a year early, reclassified, and could get on-campus just five months after turning 17.

Now, expectations were somewhat tempered for the young Wisconsin native, but he is still a Badger running back. Not only did he impress, but he thrived, stole the spotlight, and ran with it. Allen ran for 1,268 yards and scored 12 touchdowns. Now for the comp we mentioned above, it fits more than you would think.

Not only does Wisconsin have its own Henry in theory, but physically they have one. Allen and Henry have similar physical running styles as well as physical builds. The upright running motion paired with a drive to run people over makes Allen a must-watch when on. This player comp will emerge the more you watch him, don’t call me crazy just yet.

We talked about the physical style that draws the Henry comparison, but now it is time to see it. In the play below, you see contact balance, no fear in meeting players head-on, and the ability to handle the physical carries all game.

The contact balance for his size is almost as lethal as his strength. Allen is naturally strong with his 6’4”, 238 pounds frame, and he also has the work ethic to maintain it. When he was 16, as a junior in High School, he was clean hanging 405 pounds. He broke that personal record this past February while at Wisconsin, so what is next? The running back from Fond du Lac, Wisconsin, is a true unicorn.

Vision for an RB almost seems to be a given when they are great but don’t forget about Trent Richardson. Allen, though, seems to be legit in this category. When you watch him run, he has the physical strength to make his own running lanes, but he follows the blocking. Such a simple task to ask of an RB but often overlooked.

Time and again, you see Allen show patience in finding his running lanes. He makes a move at the line and then bursts through the layers of the defense to make a play. His overall long speed needs to be expanded upon, but we aren’t here for that. The vision Allen possesses allows for him to be in possession to break off long runs.

Currently, Allen seems to be a bit undervalued in the devy community. I am confused by it, but I also understand it. We are looking at a unique player with a unique age. That is worth distancing yourself from but allow me to sell you on the idea.

Allen will come into the league with some of the freshest legs it has ever seen at the RB position. He has the work ethic to keep improving, and we have seen this run style work. Not only work but thrive from a fantasy perspective. He won’t have the passing game work – what Wisconsin RB has, but neither does Henry.

Braelon Allen is Derrick Henry – accept it, love it, and don’t miss out on it.