Jaren Hall has taken over the quarterback spotlight at BYU, Andrew Harbaugh breaks down what to expect in his senior season from Jaren Hall. 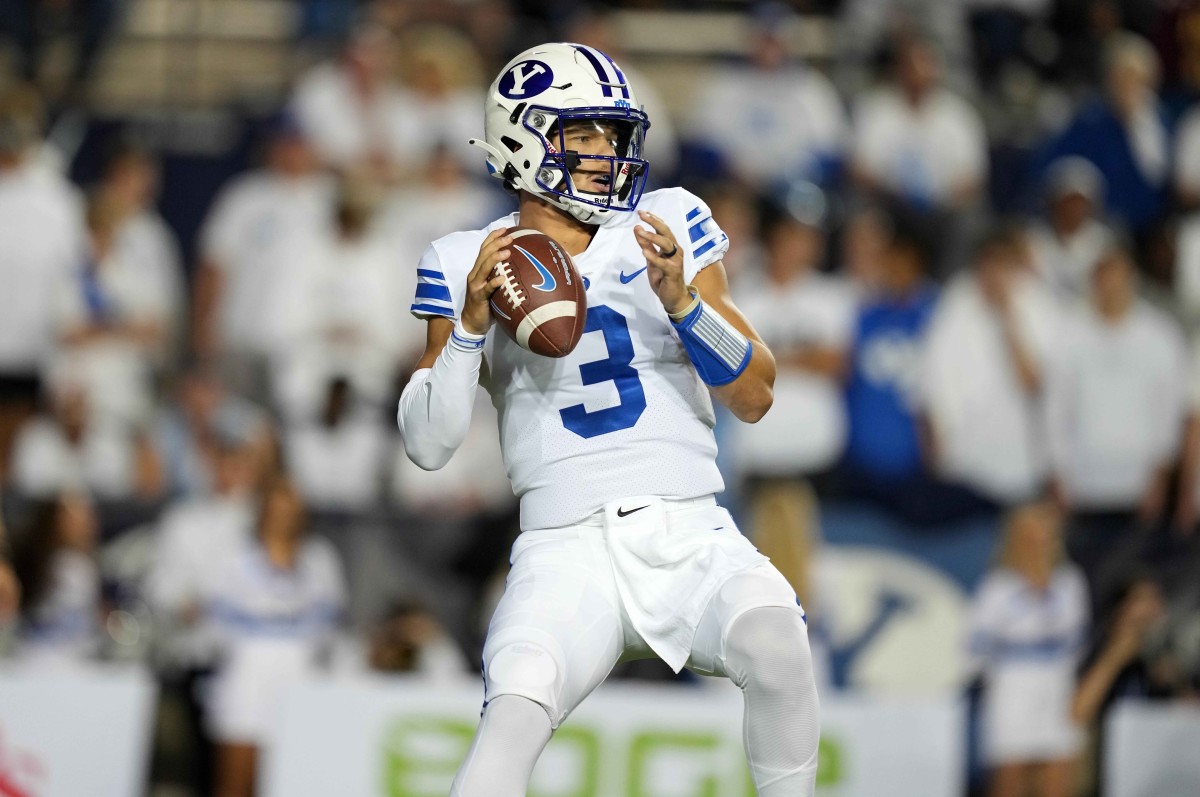 Jaren Hall is from Spanish Fork, Utah, and attended Maple Mountain High School. While attending high school, he was a three-sport athlete playing baseball, basketball, and football. He was the third-rated quarterback coming out of Utah and was the 20th-ranked quarterback nationwide. He also comes from an athletic family. His father and brother played college football and his mother was a gymnast at college. They also all attended BYU.

Taking Over for Zach Wilson

Hall had to wait for his time upon arriving at BYU in 2018. He would be redshirted his freshman season and only appear in one game during his first three years. He would earn an extra year of eligibility due to the COVID year to enter 2021 as a sophomore on paper, but it was his fourth year on campus. Upon getting the reigns in Provo, he would not disappoint either. He took over right where Zach Wilson left things.

He led BYU to an 8-2 record and proved to be as much a threat at QB as anyone in the country. BYU’s offense would average 452 yards per game under his leadership and 33 points per game. Hall himself would pass for 2,583 yards with 20 touchdowns and just five interceptions on 296 attempts. While it was rumored during the offseason that USC transfer and Utah native Jaxson Dart was interested in transferring to BYU, he ultimately didn’t. This, of course, leaves Hall free to build off a strong 2021 campaign in a crowded quarterback field.

He displays excellent zip-on passes to all levels of the field. Hall demonstrates an ability to drive the ball downfield when need is and isn’t afraid to do so. He can sometimes have a little too much on deep passes but throws the majority of them right in the breadbasket or between the numbers.

As mentioned above, he has the arm to get the ball effectively to all levels of the field, but he is also doing so with accuracy. The short to intermediate passing is where he thrives the most with his accuracy. He can hit receivers where only they can make a play on the ball if they are in coverage across the middle. Dump-offs and deep balls can sometimes have too much on them, making them harder to catch.

The decision-making for Hall is rather reliable. He sometimes can be too confident or aggressive with his passes, especially across the middle, but his accuracy bails him out. When it comes to making progressions, though, that may be where Hall demonstrates the most NFL-ready of all his traits. He has no problem leaving a designed first option in a play and moving to his second and third choices or even a checkdown. That lesson in itself is something so many QBs struggle with, even in the NFL.

One of the more underrated things that Wilson did at BYU was mobility both inside and outside of the pocket, the same can be said for Hall. Hall has great pocket awareness and vision as a player that allows him to avoid sacks and even pick up meaningful yards. He won’t be setting rushing records, but we have seen what a guy like Russell Wilson can do, and Hall can be something similar as a runner.

Going to be honest, if Hall was eligible this draft cycle, he very much could’ve been a top ten pick. He has excitable arm strength and sound decision-making. He has shown he can be developed over his time at BYU. Hall can be a day one starter for a team in 2023 if drafted to be so, as he has also shown he can command an offense and be multifaceted. He has a big year ahead of him in 2022, but if he can build off the sky could be the limit for him as a college and pro player.