Marvin Mims choose to stay at Oklahoma when many of the offensive weapons transferred. How does his Devy outlook look now and does he have strong NFL prospects? 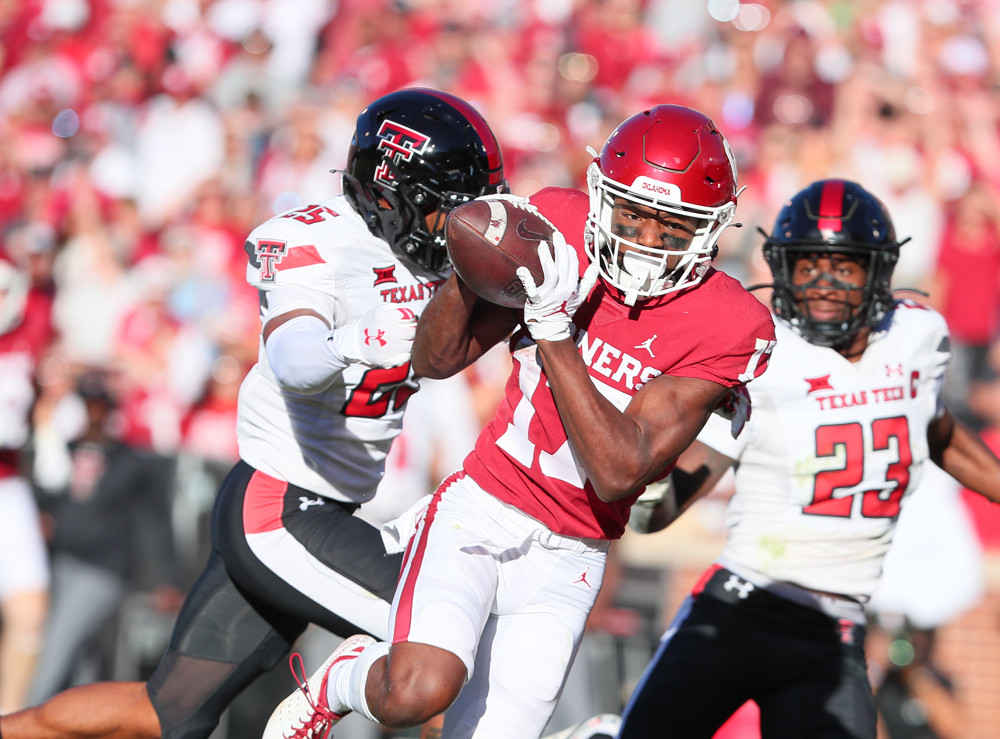 Hopes were high for Marvin Mims and Oklahoma heading into 2022. Spencer Rattler was the quarterback, and the offense was expected to be prolific and score by the droves – with Mims being one of the key components. After an impressive freshman year, he was undoubtedly “the man” in Norman, and a considerable increase was on the way.

The trials and tribulations of the season are well documented, and Mims didn’t have quite the season most expected. With Caleb Williams slinging the pigskin, Mims’ targets dropped dramatically, and he only caught 13 passes in the seven games with Williams at the helm.

The spring game showed a tiny flash of what the Sooners’ offense could be with Dillon Gabriel in charge. The connection between Gabriel and Mims was evident, and Mims should take the step forward we expected. 2023 is a massive year for the young receiver.

Mims attended Lone Star High School in Frisco, Texas – and he was a Sooner? He was a four-star recruit, the 168th-ranked player in the 247Sports Composite, and the 26th-ranked player in Texas for the class of 2020. Mims had offers from Stanford, Notre Dame, Tennessee, Texas A&M, and Wisconsin but only took one official visit. It was Colorado, but Mims chose to take his talents to Oklahoma and Lincoln Riley.

Mims had 37 catches for 610 yards as a freshman and reached the end zone nine times. He also returned 13 punts with a 12.5 yards per return average. Mims was an electric playmaker, and he climbed up Devy rankings. There was a lot of buzz going into his sophomore year.

His statistics were not atrocious but definitely not the step forward many expected. Mims had 32 grabs for 705 yards and hit paydirt five times. The offense was still explosive, but targets were spread around more, and Mims was not as dominant as we hoped.

There are many instances over Mims’ first two seasons of him running several yards behind the defense. Some were receptions and huge plays, some the QB didn’t see him, but he has an uncanny ability to get behind the defense. He doesn’t have blinding speed, more on that later, but as plays break down, he understands his assignment. Here are two examples versus TCU, as a freshman, and one showcases his strong hands.

The first catch on the new clip showcases Mims’s ability to make a catch and get upfield in a hurry. There isn’t a lot of dancing around. He turns upfield and doesn’t dally around. He has a nose for the end zone.

The second catch below shows another example of Mims getting behind the defense. He’s elusive and smooth – the fluidity in his game leads to many of the blown assignments. Mims plays with a loping “urgency,” and it baits defenses.

Not only can Mims stretch the field, but he’s also got phenomenal body control and can locate the ball in the air like a seasoned veteran. Not many “slot” and smaller receivers can contort while finding the ball to make a catch like this one below.

Oklahoma WR Marvin Mims (in the slot on the bottom of the screen) averaged 22 yards per reception last season for the Sooners. Big play/vertical threat. Excited to watch him this fall as the likely top weapon in Oklahoma's aerial attack.

Here’s another example of phenomenal hands and body control. Mims plucks the ball out of the air despite the corner being right on him. It was a laser beam throw, and he effortlessly snares it, making it look easy. But it’s a tough grab.

It’s hard to say that Mims doesn’t have long speed when you watch the clips above, but it’s evident if you watch more of his tape. He gets open but works the defense and can catch them out of place with his fluidity. Mims isn’t going to blaze down a sideline and toast a corner, especially an NFL one. I also can’t see him catching a short screen or cross and blazing through the middle of a defense.

I hate using the word average twice, but I got that feeling watching Mims repeatedly. He’s not going to juke DBs at the line of scrimmage or change direction and explode out of a cut. It’s not in his game. His footwork is good, but I want to see more of the precise cutting in routes and after the catch. Mims knows how to use angles and fakes but will not cut on a dime and destroy a defender with misdirection. He uses what he has effectively, but I can see this trait holding him back at the next level.

I started this article and was going to emphatically defend Mims and his falling devy value. He’s a big play WR who often seems to get open at will and deep. Watching the tape closer, I saw that it was usually just sloppy defense.

Mims is a decent WR, and I could see him being a solid WR2, operating primarily out of the slot, and he could have some fantasy value. He’s got a smooth game and finds ways to make plays. NFL defenses will not allow as much freedom, and Mims will need to work on technicalities and be a better receiver.

His Devy value is right about where it should be. Mims is going off the board around WR20, and I like that value. In C2C, he could be more valuable with at least this season in which he should have some pretty strong numbers.