Syracuse has produced two of the best college RBs of all time. Sean Tucker could be the next one. Andrew Harbaugh breaks down what there is to love about the Orange RB. 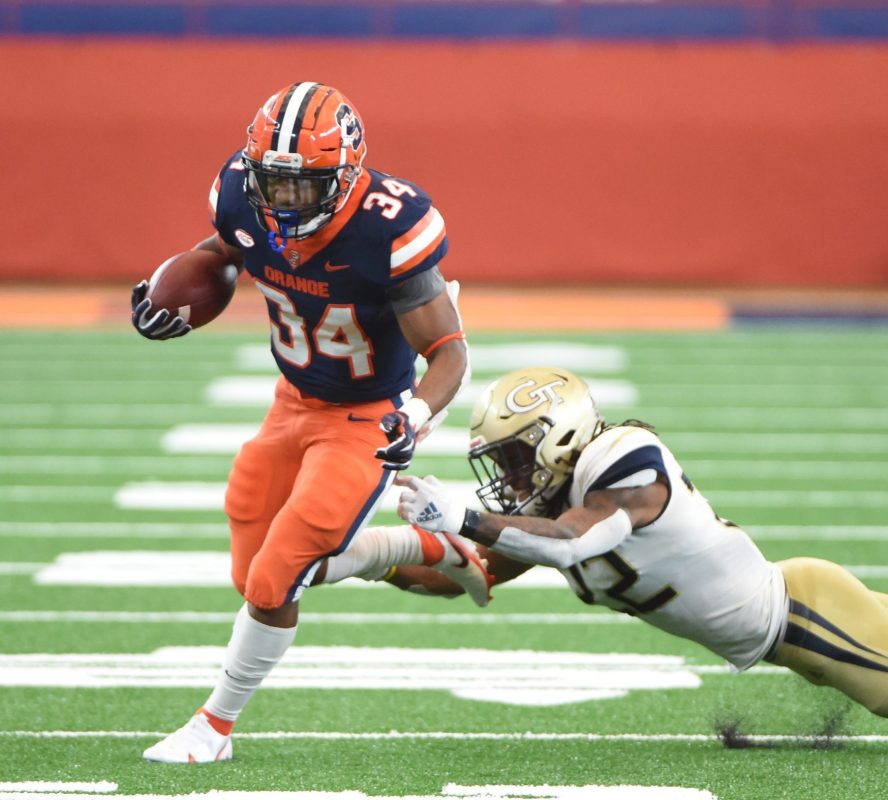 Syracuse has produced two of the greatest college running backs of all time, Jim Brown and Ernie Davis. He isn’t in that same tier by any means, but Sean Tucker has shot life into the running back legacy at Syracuse.

He started his college career coming into Syracuse as a 3-star recruit from Maryland. Apart from football, he excelled as a track star at Calvert Hall College High School, where he won titles in the 100 and 200-meter dashes. That speed has become his biggest tool as he has developed into one of the best running backs in college football.

Light at the End of the Tunnel

Tucker would arrive on campus during the shortened COVID-19 season, so he played in nine games as a freshman. He would have moderate success his first year, but his biggest game was without a doubt in the season finale against Notre Dame. Notre Dame had one of the best run defenses in 2020, and Tucker was able to get 147 total yards and one touchdown. With that, he rode a wave of momentum into a monstrous 2021 season.

All of 2021 was Tucker’s to take, and he did that and then some. He would rack up 1,751 total yards, a majority on the ground, and was the brightest spot on a poor Syracuse team. He saw a significant uptick in his receiving work, went from eight receptions to 20, and proved to be able to handle a big workload setting up high expectations for 2022.

Natural vision as a ball carrier demonstrates that Tucker can find holes when running on the outside or cutting upfield. When he sees a hole in that defense, his microwave ability helps him. I mean that when he reads the defense and finds a weak spot, he attacks it and refuses to lose out on a meaningful carry.

The track work and championships Tucker had won in high school is a developed speed that he has not lost. One would argue it has gotten better. The microwave ability that I eluded to above is where his speed shows. It is almost comical and effortless for him to get a handoff or receive a pass and be able to turn upfield and take off if given the daylight. His testing at the Pro Day or NFL Combine will be fun to watch.

Despite his stats showing he only has 28 career receptions, he showed last year that pass-catching is coming naturally to him. Syracuse is a unique team, a bad team, really, so them dumping passes off isn’t something you see often. When he does catch a pass, though, he demonstrates fluid hips, clean footwork, and the ability to take it to the house. Tucker works best in space, and is used in the passing game gives him that advantage.

As we get to know this potential 2023 running back class, we will realize something quickly. It is loaded. Bijan Robinson remains the head of the class, but guys like Sean Tucker could make things interesting. The NFL and draft Twitter love testing numbers and pair that with the film, then we have ourselves another monster head on the dragon, the 2023 RB class.