With Jameson Williams, and John Metchie, moving onto the NFL, how will Burton impact the Alabama offense? 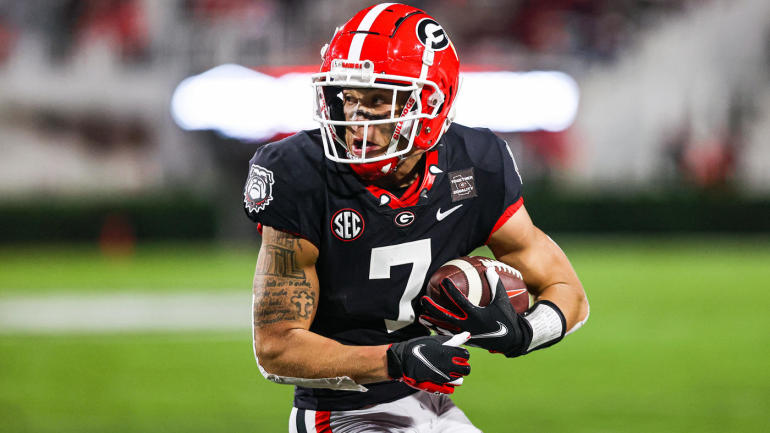 Coming out of his hometown of Atlanta, GA, Burton was known as a very physical player who played with an edge to his game. He had the strength to get off of press coverage and use his body well to create separation. Burton possessed the ability to bully opposing corners. With an excellent package of size, speed, hands, and play-making ability, Burton was ranked as a 4-star recruit in 2019. He committed to the University of Georgia over other Alabama, LSU, and Florida, to name a few.

Before attending Georgia, Burton had verbally committed to joining the Hurricanes and attending the University of Miami in 2018.

The WR recruit was the #13 prospect at the position. Ranking #15 in his region, and the #10 overall in the State of Georgia.

Burton spent two seasons with the Bulldogs, where he accumulated 901 total yards, hauling in 53 receptions, and grabbing eight receiving touchdowns. While the stats might not jump off the page, he was effective on a team that prioritizes more of a spread offense. One that combines the use of tight ends, running backs, and 3WR sets.

Burton was Georgia’s most productive wideout last season. He averaged 19.12 yards per reception, totaling 497 yards and five touchdowns over 14 total games. Even though he was the top option at receiver, it was no question that he was playing behind star tight end Brock Bowers. All this in an offense that asked QB Stetson Bennett to play more of a game-manager approach.

The former Bulldog entered the transfer portal on January 19th, 2022. Just four days later, he announced that he would be committing to the rival Alabama Crimson Tide to finish his collegiate career.

This decision soured his image to all of the Bulldog faithful, but who can blame Burton for wanting to join a program that has churned out top first-round WR prospects like Julio Jones, Amari Cooper, Jaylen Waddle, and Devonta Smith? Alabama’s success in developing top-flight receivers goes unmatched. Thus, making this the proper business decision for his future.

Burton is joining an offense that ranked fifth in the country, averaging 42.7 points per game, entering last December’s SEC Championship game. Not only are they a high-powered offense, but they are also heading into this season with their top two receivers from last season making a move to the NFL in Jameson Williams and John Metchie.

Without Burton, Bryce Young’s top two remaining targets would have been Slade Bolder and Cameron Latu, who did not have the same explosiveness that Williams and Metchie provided him. Burton’s addition to this offense looks to potentially help fill that void for the Crimson Tide offense in 2022.

Burton is known to be a player that “likes to be uncomfortable.” That will benefit him as he makes the transition over to Alabama. He is no stranger to pushing himself harder to stand out when he is out on the field. In his press conference after the transfer news, Nick Saban noted that Burton was someone he was recruited out of High School. Even then, Saban knew that Burton possessed a skill set that would impact any offense that he was on.

The departure of Williams and Metchie is sure to boost Jermaine Burton’s stock entering this season with Alabama. He looks to get every opportunity to be the next high-profilea receiver to enter the NFL draft coming out of Alabama.

It is 2014 All Over Again, Skip on Drafting a Quarterback this Year
Devy Quarterback Landscape
Black Friday Sale