There was a smaller slate this week in college football but there was still some exciting games. Check out the Devy stock watch for week zero! 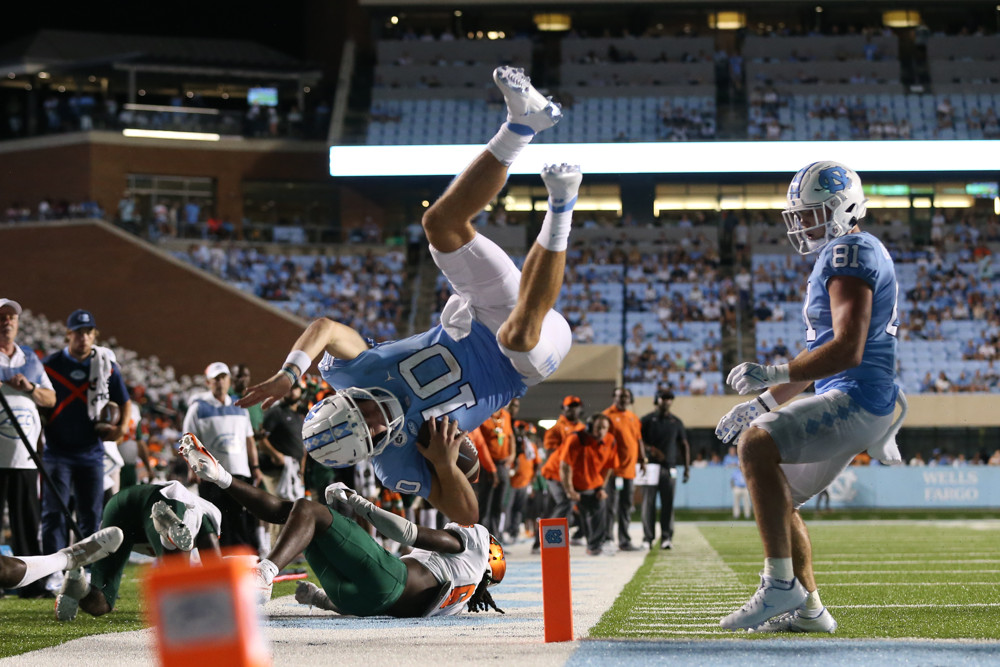 College Football is BACK! In Week 0, there was a small slate, but there were some performances to take note of for Devy purposes. I will weekly talk about players’ stock up, stock down, and players to keep an eye on. With a smaller slate of games, there are not that many for stock down this week.

Maye was battling Jacolby Criswell for the starting job this spring. Maye had quite the coming out party and was very impressive. I really liked how he spread the ball around and showed his mobility in and out of the pocket. Maye showed good touch but does need to work on doing that more consistently. I want to see what Maye does against better competition, but he is not on the map for Devy based on production and not just recruiting hype.

Brown had an impressive 2021 campaign, and Illinois knew they would ride him as he didn’t participate much in spring or fall practice. He did not disappoint against Wyoming, where he broke off chunk play after chunk play. He finished with three touchdowns and had a 60% snap share. A big bonus is that it looks as if Brown will be more involved in the passing game. It will be interesting how he does against BIG10 competition, but he is an RB moving up Devy ranks.

Omarion Hampton was a four-star recruit on 247 Sports, and I really was impressed with his high school film. I figured he would need time to take over the depth chart. D.J. Jones received the start, but it seemed just by name only. Hampton led in carries, and even more important is that he only had 21 snaps but carried the ball 14 times. When he is in the game, they want to give him the ball, and he shows good vision and will be the power back, much like Javonte Williams was.

The Tar Heels in 2021 were looking for a more consistent receiver opposite Josh Downs. At least from one game, it seems as if Blackwell may be able to provide that. They will be in shootouts, so I am interested to see if Blackwell continues to be productive.

Hull was the bright spot for Northwestern in 2021, with over 1,000 rush yards. He looked to have gotten stronger and was able to make big plays against Nebraska. Cam Porter is back from injuries and had only two fewer carries than Hull. It was more because of game flow, and Hull played in 60% of snaps, so I am excited to see if they can continue to make plays through the season.

In a surprise move, Gabe Ervin did not see any action for Nebraska in losing to Northwestern. He had a serious knee injury in September of 2021, but most thought he would see time in this game. The main reason for the stock down is the performance of JUCO transfer Anthony Grant.  I believe he is the lead back with his impressive performance of 101 yards and two touchdowns.

Thanks for checking out my devy stock watch for week zero of the college football season. Check back every week as we will continue to watch the stock trends of devy players moving throughout the year. You can follow me on Twitter for all my devy content.