This was a weird week in college football. A couple of close calls for top teams and Tennessee’s playoff hopes were ruined by South Carolina. Let’s take a look at the Devy Stock Watch for Week 12. There are a couple of freshman RBs to keep your eye on. 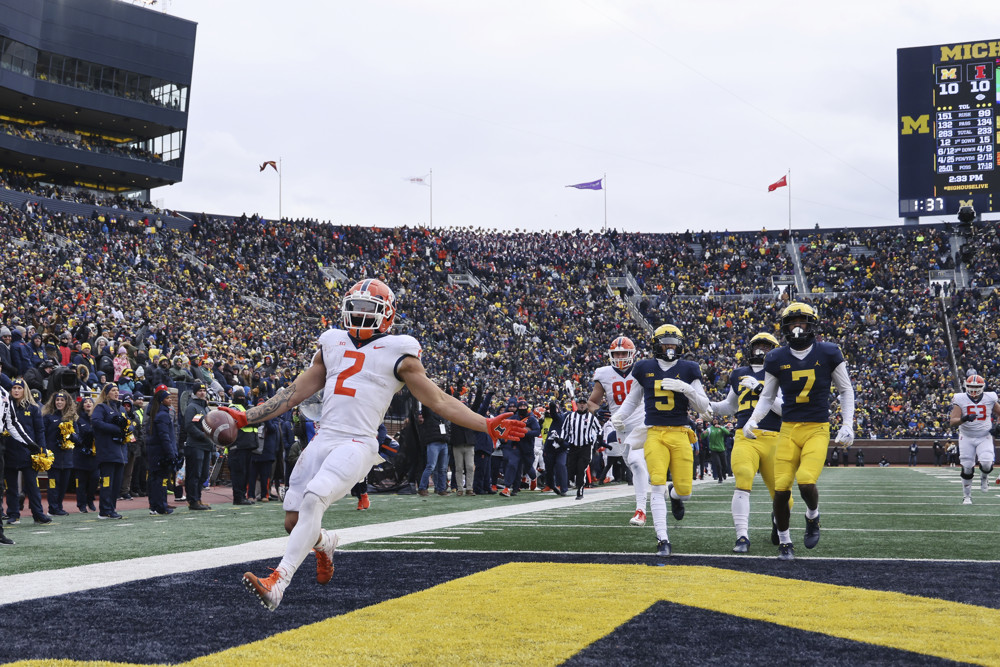 Week 12 had two top-four teams escape with last-second field goals, and Tennessee is now out of the playoff picture in an embarrassing loss to South Carolina. Let’s see who impressed and who disappointed in the Devy Stock watch for Week 12.

Brown is a player I love, and more people are starting to see how good he is. Illinois has lost three straight games, but it is not because of Brown. He had his most challenging test against Michigan and almost was able to will the Illini to victory. Another excellent sign for Brown is being more involved in the passing game. He has 26 receptions this year, which is almost double from 2021. The 2023 RB class is deep, but Brown is someone I would keep an eye on.

Hall has had an up-and-down season, but a lot of that can be attributed to injuries to his receivers. In BYU’s four-game losing streak, he played mediocre, but in the last two games, he has over 800 yards and eight TDs. Hall is someone that I would like to see more consistency with, but he shows the tool to be successful at the next level. The third QB of the 2023 NFL Draft Class is still up in the air so Hall could be in the running.

Dell is having another great season with the Cougars. He has back-to-back seasons with 90 receptions, over 1,200 yards, and double-digit TDs. He has been good all season, but in the last five games, Dell has over 90 yds in each game and eight TDs. Dell is a smaller receiver but can make difficult catches and be a sleeper in the 2023 draft.

With injuries to the top two RBs, Hayden has 248 yards and four TDs in the last two games. Hayden was a 4-star RB in 2022, but many did not think he would see much time this year. He can steal playing time away from TreVeyon Henderson if he can have another big game next week vs. Michigan.

Martinez was the 48th-ranked RB in the 2022 class and the 600th overall prospect. He has exceeded expectations in his freshman season. He started off slow but has five straight 100-yard rushing games. He is a big reason why Oregon state has eight wins and is a player to watch going into his sophomore year in 2023.

After a spectacular performance against Wake Forest, Maye had his worst game of the year against Georgia Tech. It was his first game where he did not throw a touchdown and ruined all chances the Tar Heels had at getting in the playoff conversation. Georgia Tech was only giving up 213.5 passing yards per game, but if Maye is going to be a top Devy QB, you would expect more.

After two huge performances by Neal, he returned to earth against Texas. The whole offense struggled, but this was his third-worst rushing output of the season. Neal was seriously trending up, so we will have to see if he will bounce back in the regular season finale. He has shown flashes, and hopefully, this was just an all-around bad game for the whole Kansas team.

Thanks for checking out my Devy Stock Watch for Week 11 of the college football season. Continue to check back every week as we will continue to watch the stock trends of devy players moving throughout the year. You can follow me on Twitter for all my devy content.