B1G Ten football is back! With more games being played the stock market is moving now more than ever. @SportsfanaticMB takes you through the ebbs and fllows of Week 8. 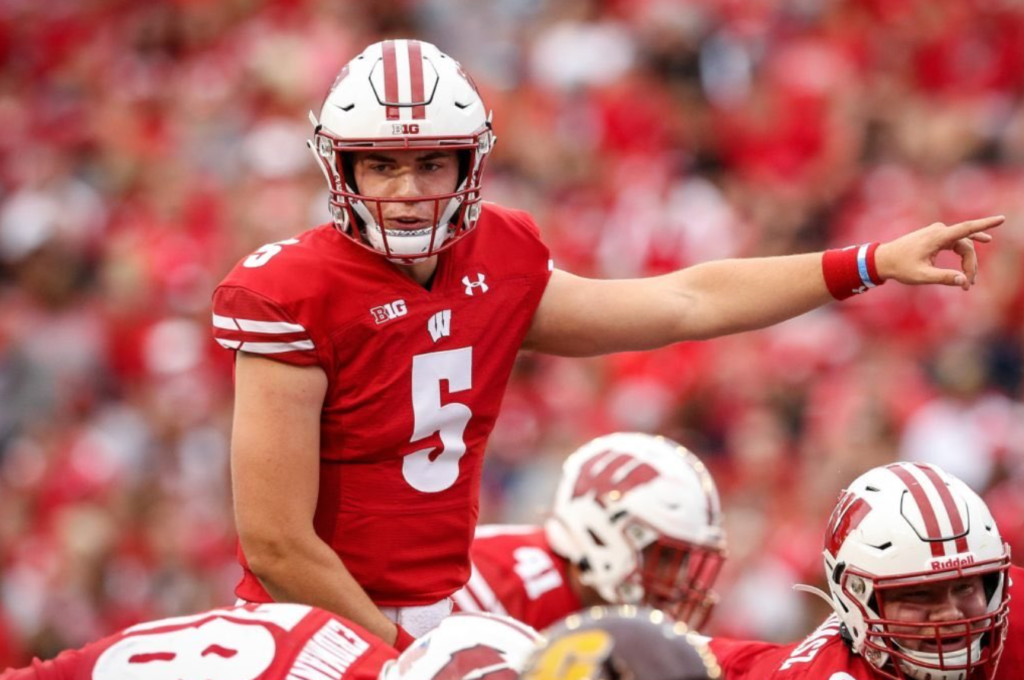 With week eight of college football in the books, we finally got to see the return of the B1G Ten Conference. With some powerhouses already going down, to some surprising play and major upsets. College football was fun to watch this past week. Of course, the teams playing good and bad are made up of the players we are all watching. Let’s take a look at how the games this weekend have changed these college players’ stock.

Mertz came out on fire in the B1G Ten opening night game last Friday. He showed off his arm and playmaking ability that we thought should have won him the job last year. Mertz mobility was a game-changer Friday night, along with his pocket presence. His ability to put the ball where he wants on the field was fun to watch and showed us all we need to pay more attention to him. Unfortunately, at the time of writing this article, Mertz has tested positive for Covid, and due to B1G Ten protocols, he will miss the next three games.

Desmond Ridder just continues to win games this year and put Cincinnati on his back. SMU was supposed to be a big test for him this weekend, and he passed with flying colors. Ridder is a sleeper quarterback for me in this class. He has been one of the best quarterbacks with his legs so far in this season. Coming into 2020, I wanted to see him improve on his accuracy and pocket presence. He is still struggling to throw the ball accurately. If he can get it figured out, he may be one of the more underrated dual-threat quarterbacks in this class.

After week one of B1G Ten football, it’s easy to say Joe Milton was the biggest surprise. Coming into a game against a good Minnesota team that many thought would win the West, Milton bullied them all night. He has an absolute cannon, which we saw on display multiple times, including a deep throw where he overthrew the wide receiver with just the flick of his wrist. He had surprising mobility as well. It is just one game, but Milton has jumped up my board and will be appointment viewing moving forward.

Javonte Williams could have made the list last week, but I wanted to give him one more week, and he didn’t disappoint. Splitting the backfield with Michael Carter, Williams has been clearly the better of the two. Outside of the Virginia Tech game where Williams led in carries, they’ve been split by a max of one or two carries leaning in Carter’s favor. Williams is a complete back who can run you over or make you miss forcing 41 missing tackles so far this year (1st in NCAA) and has a rushing grade of 94.1 on the season (1st in the NCAA.) He’s moving up in a weak running back class of 2021.

After the first two weeks of play in the Big 12, many thought Chuba returning to school might have hurt his draft stock. Well, after weeks three and four, it looks like the Chuba of old is back at it again. Over 130 rushing yards in both of the last contest, he’s starting to remind us just how much fun he is to watch. He still has that short area explosion and lateral agility. His home-run speed is there, and it’s always fun to watch him hit the open field. Ball security was one of the biggest issues for Hubbard last year. He has had two fumbles so far this season. Both coming in game two but has since looked good on that front. While he’s only moving one spot, he’s back as running back three for me in the 2021 class.

Isaih Pacheco was in my B1G ten opening weekend article as the player to watch for Rutgers. As mentioned in that article Greg Schiano joining the team as the new head coach looked to be a great thing for Pacheco as he tends to use a run-heavy offense. We saw that Saturday in their upset of Michigan State. Pacheco looked tough, and the power running style wore down that Spartan defense. He showed some explosiveness when needed. Even more, he caught all five of his targets, which was the biggest knock on him coming into his junior season. He has moved up to running back 15 for me in the 2021 class.

Man, David Bell showed us he might be better than Rondale Moore. As B1G Ten football started up, we all turned to the Purdue game wanting to watch junior sensation Rondale Moore, who opted back into play in 2020. Friday, we found out Rondale Moore wasn’t going to play, and if you still tuned into the game David Bell started to make you question Rondale, who? He absolutely obliterated the Iowa defense and secondary. Showing us, he doesn’t need to be the number two receiver. He’s just as good as anyone else in that 2022 class. He’s moved up to three in that class.

Garrett Wilson was a highly touted freshman for the Buckeyes last season. While he flashed brilliant plays, he wasn’t a focal point of the offense. Coming into the 2020 season, Wilson was tasked with a position change of moving to the slot role in Ryan Day’s offense. Garrett came out and showed why he was the top wide receiver in his class and the best wide receiver currently on the Buckeyes roster catching all 7 of his targets for 100 yards and a touchdown. Even with Olave out, Wilson couldn’t be stopped. He moved to the top wide receiver in the 2022 class.

As mentioned above, Graham Mertz had a great game passing the ball on Friday night, and Jake Ferguson benefited from that passing game in a major way. Ferguson was a player not many talked about due to the elite talents at the tight end position in this 2021 class. While Ferguson isn’t as explosive as Pitts or Jordan, he is a very good route runner and amazing blocker. His blocking skills leave him on the field at all times. He has a massive catch radius and excellent hands. It will be interesting to see how he performs with a backup quarterback the next three weeks, but Ferguson went from a guy barely getting mentioned to a top-five tight end in this class.

Rondale Moore opted out of the 2020 season during the B1G Ten catastrophe that was the conference not playing to now deciding to play. Three weeks ago, he decided to opt back into playing witch set devy and college football fans into a tizzy. Friday night, we found out Moore wasn’t going to play and that he could miss week two as well. We all wanted to see Moore play as he missed most of the season last year due to injury and started to get the “injury-prone” label placed on him. Moore is still one of if not the most explosive players in college football right now. Hold him for now until we find out more. He’s staying put at four in my rankings with a chance to move up.

Jaylen Waddle is the other player in the discussion for the most explosive college football player with Rondale Moore. Over the past few weeks, Waddle has started to put his name into the discussion for the top wide receiver overall in the 2021 draft. Unfortunately, this weekend we saw him fracture and dislocate his ankle, a horrible injury for such an explosive player. It is being reported that surgery was successful, and he should be good to go in 6-8 months. This will mean he will miss the NFL combine and likely any workouts any NFL teams have.

All that being said, Waddle has put enough on tape that the injury shouldn’t scare you off. We’ve seen players come back from this injury and not lose a step, and Waddle is more than just his speed. He has elite hands and route-running skills as well. Even if he loses a step on his speed, he should be a first-round talent at the worst second-round talent and should be held on all your rosters. He sits as wide receiver three for me right now in 2021.

Tanner Morgan was a player I was struggling to rank coming into the season. He had a breakout season last year and helped make Rashod Bateman a household name. However, there were some inconsistencies in his game. This weekend those inconsistencies came to light in a bad way in a bad loss to Michigan. Morgan played one of the worst games of his college career in primetime. He struggled to get the ball down the field, looked flustered in the pocket, and didn’t quite look like the player we saw last year. I preach not to overreact to one game, but this one was bad. I have only moved him down two spots, but he was a quarterback who some thought could be a top draft pick. This game may have already changed that.

Elijah Collins is another running back in the conversation of the top of the tier-two running backs. He had a good redshirt freshman season on a rebuilding Michigan State Spartan team. While it was only one game, Collins got 9 rush attempts for just 3 yards. Some of his issues were definitely his offensive line as he was getting hit in the backfield. Collins has dropped a few spots for me now and will need to look better moving forward than he did last Saturday.

This concludes my devy stock watch for week eight of the college football season. Continue to check back every week as we will continue to watch the stock trends of devy players moving throughout the year. For all my devy content you can follow me on twitter @SportsfanaticMB, and on my podcast the Fantasy Football Roundtable.