With a year under their belt, which WRs are going to emerge in 2022? @Fanatics_Rich takes a look at 3 players set to do just that. 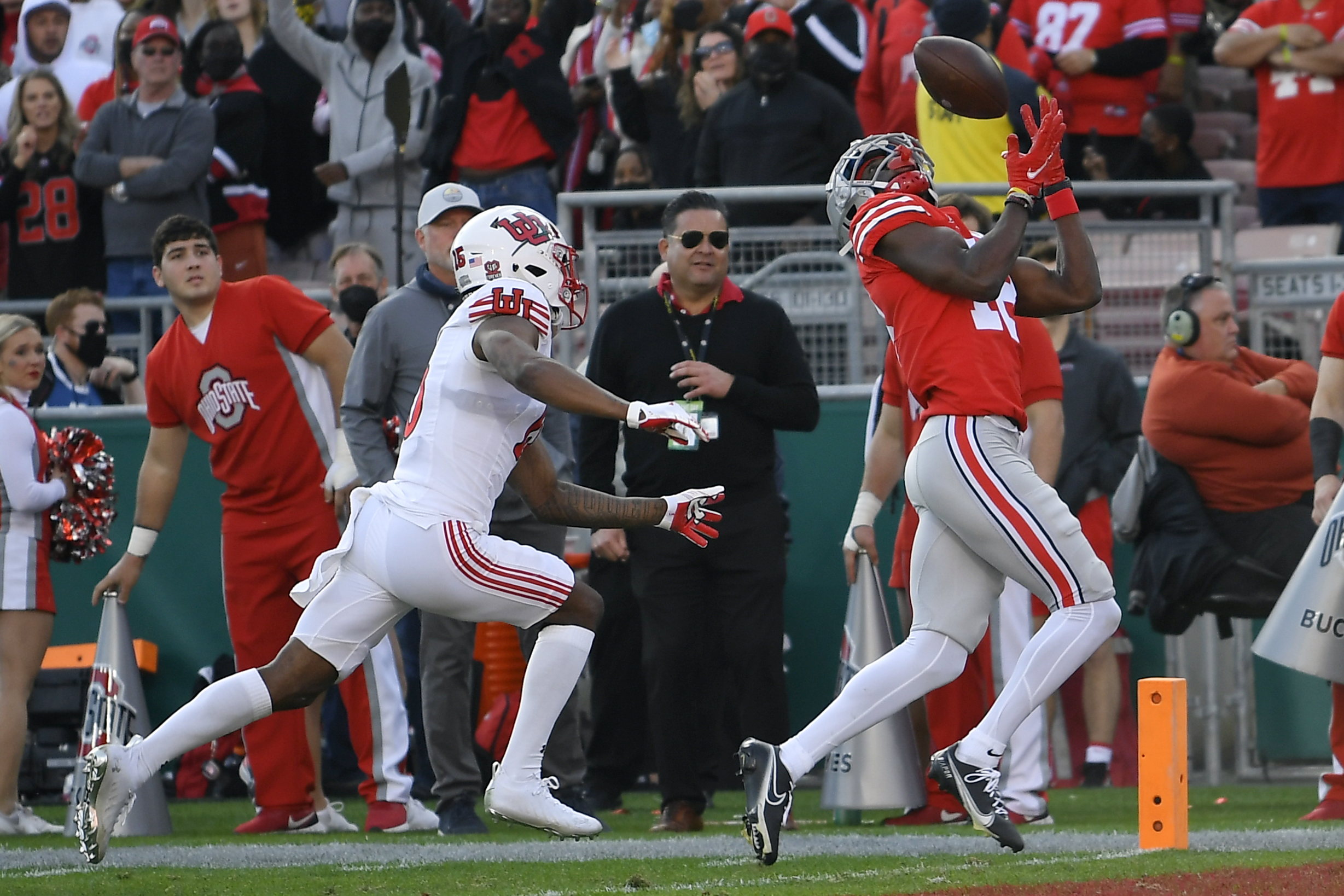 With the upcoming college football season, players all across the country are looking to emerge and establish themselves at the top of the depth charts. Players entering their second year on campus are expected to take an incredible step forward as they have acclimated to the college atmosphere. The early star of the 2024 NFL draft class is Xavier Worthy. He took college football by storm as a true freshman. What wide receivers will join that elite tier during this season? Let’s take a closer look at three players looking to do just that.

Marvin Harrison Jr is a former 4-star recruit (247 Composite) who attended St. Joseph’s Prep in Philadelphia. As the 14th ranked wide receiver in the class, he had offers from several Power 5 programs, including Florida, LSU, Michigan, Notre Dame, and Penn State, just to name a few. The son of Hall of Fame wide receiver Marvin Harrison ultimately decided to take his talents to Columbus and enrolled early at Ohio State University.

Marvin Harrison Jr was somewhat of a surprise last season as he continued to earn an expanded role. The Buckeyes had three of the best wide receivers in college football, Garrett Wilson, Chris Olave, and Jaxon Smith-Njigba (JSN). Wilson and Olave have moved onto the NFL, and head coach Ryan Day will look to fill that void. During the bowl game against Utah, we may have received a glimpse of what is to come as Harrison was on the field for 63 of a possible 69 snaps (according to PFF).

Marvin Harrison Jr is going to smash this season in the Buckeye offense!

Will be the 2nd WR behind JSN this season, then take that lead role when JSN moves to the NFL after 2022. #C2C pic.twitter.com/3TTnrtxbwv

Harrison will play on the outside for the Buckeyes, allowing JSN to remain in the slot. He is a technician when it comes to route running, very crisp in and out of his breaks with little wasted movement. Separation has been the calling card for Buckeye wide receivers recently, and Harrison is no different. He can create that separation with his technique.

Harrison will have competition from a loaded wide receiver room at Ohio State. Emeka Egbuka, the WR1 in last year’s class, will look to establish a larger role heading into year two. This off-season, the Buckeyes also brought in a couple of highly-rated recruits in Kyion Grayes and Caleb Burton. Harrison Jr did assume one of the starting outside wide receiver positions during spring camp and held on to it during the spring game.

With a strong fall camp, Harrison will solidify himself as the second option in the Ohio State offense for the 2022 season. After this season, JSN is expected to move onto the NFL. This would open a path for Harrison to elevate himself to the top option in this high octane offense.

Beaux Collins is a former 4-star recruit (247 Composite) who attended the powerhouse that is St. John Bosco High School in California. He was a very sought-after prospect with 32 offers, including programs like Alabama, Georgia, LSU, Miami, Florida, and Ohio State. Collins decided to attend Clemson University, where he was an early enrollee.

After an abysmal season in 2021, Clemson looks to reassert itself as the dominant force in the ACC. All eyes will be on the offense as that was the “Achilles heel” during the 2021 season. While several players underperformed, some younger guys seized their opportunity and began to emerge. One of those players was true freshman wide receiver Beaux Collins who saw his role in the offense increase dramatically as the season progressed.

With people down on the Clemson offense, see if you can acquire WR Beaux Collins:

Really started to establish himself as that WR1 for the Tigers. Should continue that this season#C2C pic.twitter.com/UnhehFG1Lx

Collins is the typical Clemson wide receiver as he stands 6’3. He will occupy one of the outside wide receiver positions and has a very good chance of becoming the “Alpha” within the position group. Overall success, or failure, could lie solely in the hands of the starting quarterback for the Tigers. If DJ Uiagalelei (DJU) is unable to elevate his play, true freshman quarterback Cade Klubnik will be forced into action. This may not be the worst thing as DJU continued his struggles during the Clemson spring game.

No matter the quarterback, Collins’ ability is undeniable. His burst off the line of scrimmage is both aggressive and consistent. This explosiveness allows him to close the distance with defensive backs, placing immense pressure on them and getting them on their heels. He does a good job of attacking one side of the defensive back, forcing them to turn their hips, then breaking the other direction. Collins will need to work on consistency in his route running. He has a tendency to round off routes instead of breaking them off. Another adjustment he needs to make is the ability to navigate traffic; he looks indecisive at times through the middle of the field.

Look for Collins to establish himself as the Tigers WR1 early in the 2022 campaign. Assuming that role for two seasons will place Collins in a prime position for early draft capital heading into the 2024 NFL Draft.

Lorenzo Styles Jr is a former 4-star recruit (247 Composite) from Pickerington, OH. Styles received several offers during his time in high school, including programs like Ohio State, Michigan, Penn State, Florida, and Kentucky. He decided to stay close to home and enrolled at the University of Notre Dame in February 2021. Enrolling early allowed him to participate in spring camp before his freshman season. This accelerated the adjustment to a higher level of competition.

Notre Dame is entering a new era as former head coach Brian Kelly is now at LSU. Former defensive coordinator Marcus Freeman has assumed the head coaching duties, while Tommy Rees remains the offensive coordinator (OC). Kevin Austin, the WR1 from last season, heads to the NFL along with running back Kyren Williams. That leaves a void in the passing offense as those two players accounted for 90 receptions. The player that stands to gain the most from this void is wide receiver, Lorenzo Styles.

Styles’ role within the Irish offense continued to expand as the season progressed, seeing his highest snap counts in the final two games. Talented second-year quarterback Tyler Buchner is expected to assume the starting quarterback role with the departure of Jack Coan. Buchner and Styles have been building chemistry since arriving on campus before the 2021 season. Expect a fast start to the season from both. In addition to Buchner, the presence of tight end Michael Mayer will prevent defenses from focusing on Styles. This will create additional space for the speedy wide receiver.

Speed and suddenness are Lorenzo Styles’ game. A multi-sport athlete in High School, Styles also ran track participating in the 100-meter and 200-meter events. According to 247 sports, Styles had a verified 40 time of 4.47 before enrolling at Notre Dame. In addition to speed, he is a good route runner who gets in and out of his breaks well. He was used all over the formation, lining up both in the slot and out wide.

With the numerous changes, both coaching and players, the Irish may increase the rate at which they throw the ball. This will benefit Lorenzo Styles, as he should be a focal point of the offense. The ability to move him around the formation to create mismatches is a luxury that should be taken advantage of. Expect offensive coordinator Tommy Rees to create ways to get Styles the ball in space to maximize his speed and elusiveness.