Following the release of Austin Hooper fellow TE David Njoku is in line for a career breakout. @ReflipeWThenuz details the player and the situation. 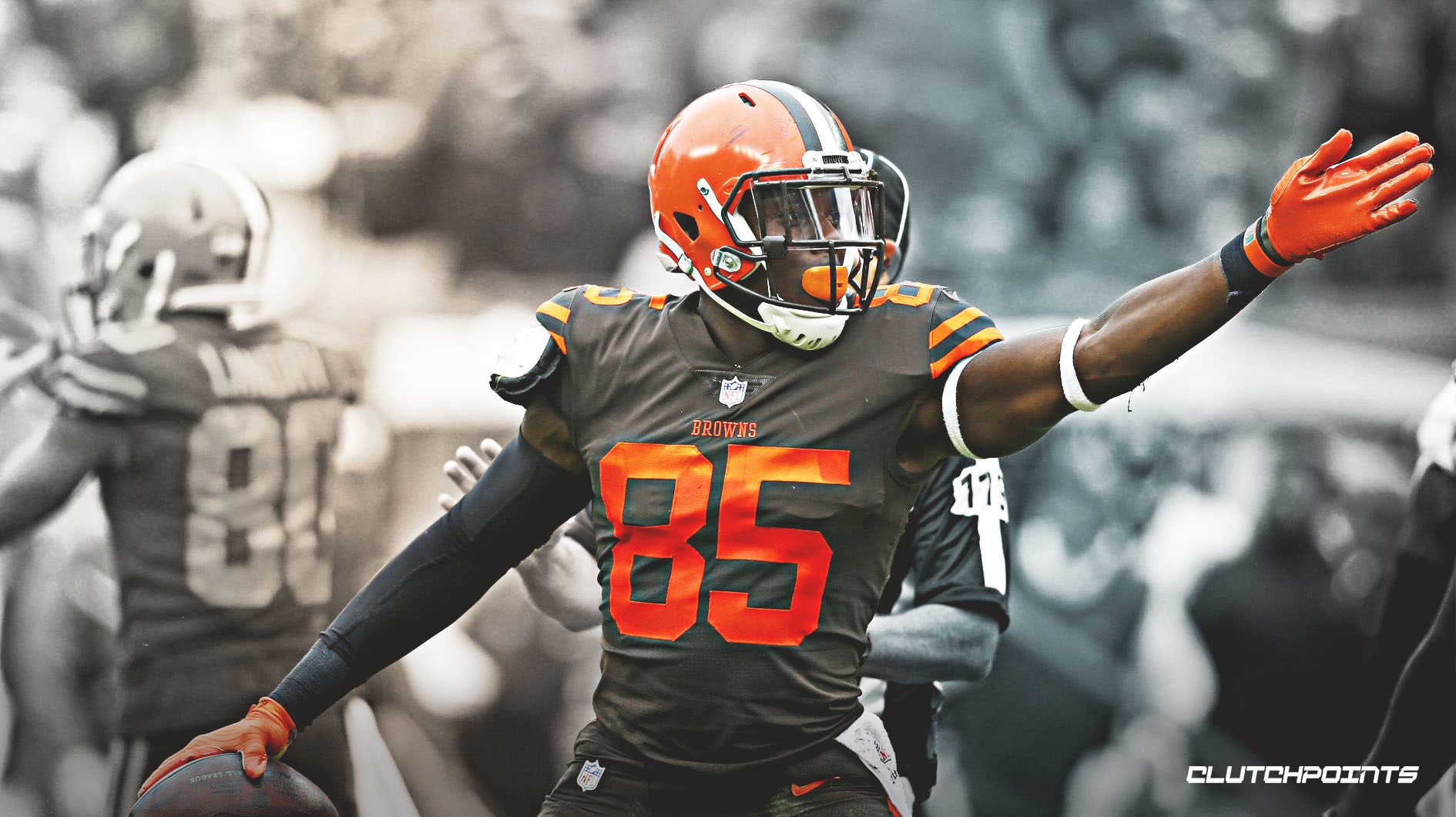 In one of their first moves of the new league year, the Cleveland Browns announced they would be releasing starting TE Austin Hooper. Team officials revealed they would be making the former Stanford standout a Post-June 1st cut saving the team $9.5 million against the cap. This move was foreshadowed when the team assigned the Franchise Tag to former first-round pick David Njoku ahead of Free Agency. This news means that Njoku and, to a lesser extent, talented former Mackey Award Winner Harrison Bryant are moving up the depth chart. It should translate to additional looks in the passing game. Both players make for intriguing buys in TE Premium. I am personally targeting Njoku wherever I can. Let us examine why I feel Njoku is a player you should target for your Dynasty Squads without further ado.

While many fans may have forgotten, I’m here to remind you that Njoku is an absolute athletic freak. When he came out of the University of Miami, he was also an extremely raw prospect. After redshirting in his freshman season, he only played meaningful snaps in two seasons for the Hurricanes. Of those two years, only one was as a TE before entering the NFL Draft. You can see his athletic profile below.

Despite his limited production and extremely young age, only 20 at the time of being drafted, his incredible athletic profile helped get him selected in the first round of the 2017 draft by the Cleveland Browns. Since being drafted, Njoku has produced an up-and-down stat line. He has flashed his god-given talent while also displaying inconsistency, which led the Browns to sign Hooper to one of the richest TE contracts in NFL history just a few short years ago.

Njoku has repeatedly shown the skills that made him such a desired prospect throughout his Cleveland tenure. Despite being in the league for five years already, he is still a relative youngster for the position. Most TEs don’t truly hit their stride until their late 20s. With the ability to make plays like the ones displayed below, its little wonder why Cleveland has given such a long leash to their former first-round pick.

2/ After 3 straight wins, Baker gets his 2nd chance. 4th quarter vs. LAC, Browns down 1 with 10:50 left in the game. Baker hits David Njoku for a 71-yard TD to take the lead. pic.twitter.com/uAAc6tfZEH

Fast forward two years since the signing of Hooper, and the Browns have seemingly decided in favor of their former first-round pick. The departure of Hooper vacates a sizable number of targets. After being designated as the franchise player, it is not inconceivable that a sizable portion of the vacated targets would head Njoku’s way. Last season, Njoku made noticeable strides with his efficiency in particular. If he can get his Targets up in the 80 to 100 range, he could easily finish as a TE1 with the possibility of finishing in the top five.

Bryant will definitely get some additional looks following the departure of Hooper. However, Njoku should be the primary beneficiary. Few teams run multiple TE formations as much as the Cleveland Browns. Both Bryant and Njoku will take on more significant roles in the passing game, with Njoku becoming the 1A.

Njoku has been angling to stay in Cleveland for some time. Over the last several seasons, despite his name repeatedly coming up in trade discussions, he has repeatedly expressed his desire to remain in Cleveland. He genuinely loves playing in the Mistake by the Lake. Looking at it from the outside, it is easy to see that the 20-year-old kid drafted out of Miami has transformed into a bonafide leader of men. He was recently named a chief of his tribe in his native Nigeria.

HAIL TO THE CHIEF!

Congratulations to @David_Njoku80 🇳🇬 on his chieftaincy title in Nigeria’s Igboland.

The best part about Njoku is his price. Before the news of Hooper’s release was made public, the former first-round pick was going for peanuts in some leagues. A search of the Dynasty Nerds trade finder revealed some true bargain-basement prices. You can see a couple of examples below.

Right after the submission of this article, the proverbial ground shifted beneath the league and, in particular, the Cleveland Browns. In a rare moment not often seen in the NFL, the Houston Texans traded their young franchise QB Deshaun Watson to the Cleveland Browns for a slew of draft picks, including three 1st round selections. This trade changed the dynasty situations of all involved, including David Njoku. While Bake Mayfield has been a fine QB, Watson represents a sizable upgrade for the Cleveland Browns. Watson has been highly prolific and efficient as a QB owning the second-best QBR in league history. Amari Cooper and David Njoku have gone from low-end buys to must-have dynasty assets with the prolific Watson under center. It is safe to assume Cleveland and HC Kevin Stefanski will be opening up the offensive just a bit after making such a high-end investment in upgrading the QB position. Njoku is one of the most talented weapons on the Browns offense. His field-stretching speed will be an asset between the hash marks for Watson and company. For his part, Watson has never played with a TE as talented as Njoku. Pending a lengthy suspension for his new QB, I believe David Njoku is in for a career season in 2022. It is also quite possible that the team may look to extend him sooner rather than later, considering their new lack of high-end draft picks. With the change in his QB, I would now be comfortable paying a high-end 2nd in TE premium leagues. If your league mates haven’t caught on to his shift in value, scoop him up while you can.

Thank you for reading this article! Please be sure to join the #Nerdherd, so you don’t miss out on any of the amazing things we have to offer @Dynastynerds.com. Use my promo code DynastyHolliday for a 15% off discount. You will get rankings, extra podcasts, and access to our rookie film room. You can get access to our revolutionary DynastyGM tool for just a couple of bucks more. So much for so little, why miss out on all the fun. Also, you absolutely must check out our new mock draft tool. Please find it in your Apple & Android app stores. Follow me @ReflipeWThenuz for more dynasty content and other musings.