Every draft comes with tough choices. But some data can give us an advantage in probability when choosing between two players at different positions. 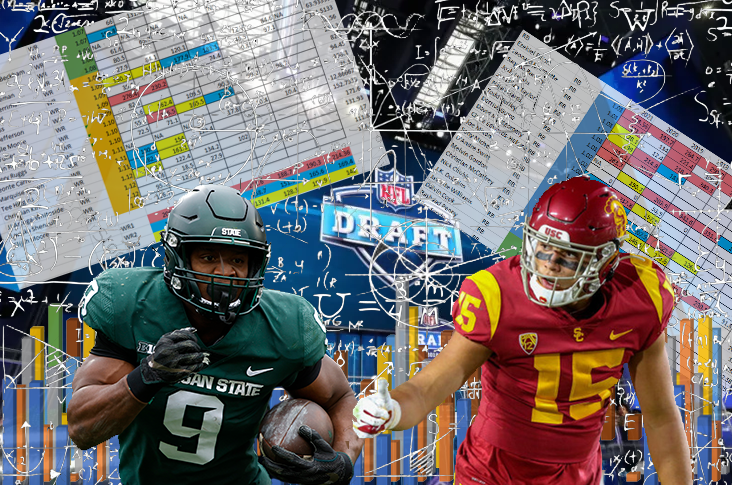 For years, I have been a firm believer in the tactic of building your dynasty teams with wide receivers first.. The shelf life for wide receivers is longer. Typically, a good wide receiver room covers more starting spots on your roster. Injuries are more common in other positions. But I got to thinking about this recently. What are the actual stats on the success rate of draft picks between WRs and RBs? What is the likelihood an RB or WR you take in a rookie draft becomes a success?

Put another way, if I did no research on rookies at all and just took players based on any big board, what are my chances of success? If we take a pile of darts and randomly throw them at prospects, what is the chance I hit on a successful player versus a bust?

To dig into this further, I decided it would be best to collect some data from rookie drafts in years past. With the hope of finding a trend that could help give a competitive age, I set out to really try to understand the success rate between WRs and RBs.

First and foremost, whenever analyzing data, we need to know that not every player/prospect should carry the same weight. For instance, I wouldn’t start comparing Ja’Marr Chase and DeVonta Smith versus Khalil Herbert and Kylin Hill in last year’s rookie drafts.

According to cumulative ADP, the easiest separation for tiers would be what round the player was taken in. Using Mizelle ADP to pull draft positions, I put WRs and RBs into three groups: 1st round picks, 2nd round picks, and 3rd round picks.

Using this divide, I categorized every WR and RB drafted in rookie drafts from 2015 to 2021 into these three groups. We now had our receivers and backs divided into like-ranked prospects.

Next, we had to figure out the thresholds. Once again, the easiest divide for this felt like the three tiers of each position: RB1, RB2, RB3, WR1, WR2, and WR3. I collected point totals in half-point PPR every year from 2015 to 2021 to determine if a player was in the top-12, top-24, or top-36 of their positional group.

With all of these guidelines set, we were now ready to compare the two positional groups.

Hit Rates for RBs and WRS

As I stated at the beginning of this article, I believe in building my teams through the wide receiver position. I was confident that when I set out on this project, I would have statistical evidence saying that I was right. As it turns out, there is a very strong case that building with backs is the safer route.

After pulling all the data, I highlighted every season that a player had a top-12, top-24, or top-36 finish.

Here are the totals for RBs:

What we see here amongst RBs makes some sense. The higher the round a back is taken, the higher the success rate. For instance, 41% of RBs drafted in the first round from 2015-2021 had at least one top-12 season in their career thus far. Compare that to round three, and you will see only 1 RB drafted (James Robinson) had a top-12 season in their career.

Of the 39 RBs drafted in round one, they were active in 153 different NFL seasons and resulted in a top-12 season 28% of the time. In round two, the numbers dipped with only 11% of the seasons played by 31 different backs resulting in a top-12 finish.

These numbers may not seem that encouraging at first glance. We all get caught up in rookie fever and the ability to get a player on our team before they succeed, and their value skyrockets. But finding a true stud is still, seemingly, a bit of a crapshoot.

Well, if you weren’t encouraged by RB stats, you will be even more disappointed when you see the WR numbers:

Among WRs, only 23% of first-round ADP receivers between 2015-2021 finished with at least one top-12 season in their careers. Of the 138 possible seasons played between these 39 players, only 14 were top-12 seasons. As noted in the data above, more RBs hit RB1 or RB2 numbers during their rookie year than WRs who hit those thresholds. When RBs enter the league, they hit the ground running.

This difference between RBs and WRs is, honestly, pretty significant. In every single category amongst round one and two picks, the backs have the advantage over the receivers. It is only the third round where the receivers have an edge, which is a slight one and still at very low percentages of hit rate.

But what does all this mean?

I scratched my head for quite some time, looking at these numbers and trying to figure out how this separation could be so significant. I ran the data three different times to make sure I wasn’t making a mistake. And then, I realized one of the biggest factors in play between these two groups: life expectancy.

As I said in my intro, wide receiver shelf-life is much longer than running backs. Receivers can easily play up to and through their age 30 seasons in the NFL. Meanwhile, most managers with a running back who are still actually playing over the age of 27 are trading them for whatever parts they can get.

Likewise, injuries tend to occur at a much higher percentage amongst running backs compared to wide receivers. Look at 2021. The running back landscape was a minefield.

Keeping this in mind, the separation in these hit rates in the data becomes a little less murky. There are only 12 players that can be in the top 12 at their position every year. An elite wide receiver will make it to that threshold for most, if not all, their years. It is hard for any new receivers to break into that elite top-12 because there is less turnover.

How about an example

In 2020, only four WRs drafted in the first round between 2015-2021 made it to the top 12: A.J. Brown, Justin Jefferson, DK Metcalf, and Calvin Ridley. The other eight are Stefon Diggs, Tyler Lockett, Tyreek Hill (who were all taken in the third round or later), Allen Robinson, DeAndre Hopkins, Mike Evans, Adam Thielen, and Davante Adams. All were drafted prior to 2015.

In that same year, 9 of the top-12 RBs in points scored were drafted in the first round between 2015-2021. Those backs, Ezekiel Elliott, Josh Jacobs, Jonathan Taylor, David Montgomery, Nick Chubb, Dalvin Cook, Derrick Henry, Alvin Kamara, and Kareem Hunt. The remaining three backs were Antonio Gibson, James Robinson, and Aaron Jones. They drafted in the second, third, and fourth rounds from 2015-2021. No backs drafted before 2015 made the top-30.

This is a lot of information coming at you, but let me try to summarize it the best I can. If you are looking to cash in on the most value for a single draft pick, you should always take a shot on a talented running back. However, if you are looking to hit the jackpot and land a player that will be great for a long time on your roster, draft a premier wide receiver.

The balance here is a very fine line. While the running back value is higher in the immediate return, the receivers keep their value much longer. Don’t reach for a running back that should be taken later in a draft. But, if a high talent prospect is on the board at your pick, they will offer the best possibility of value within their first two years.

Likewise, if you already have an elite WR on your team, you should be very hesitant to move on from them in a deal without a great return. Finding an elite WR in the draft is a rarity. There is maybe one player per year at WR that will grow to consistently give you WR1 returns.

If you are looking to cash in on the highest probability of top value, the RB position is your best bet. Team need, draft position, and draft class can always impact these decisions. But if it is a coinflip between a WR and an RB, the odds favor taking a running back.