As we reach the back half of the 2021 season, it is time to look ahead to the draft. @FFPeeblesChamp takes us through a full seven round mock draft for the Detroit Lions. 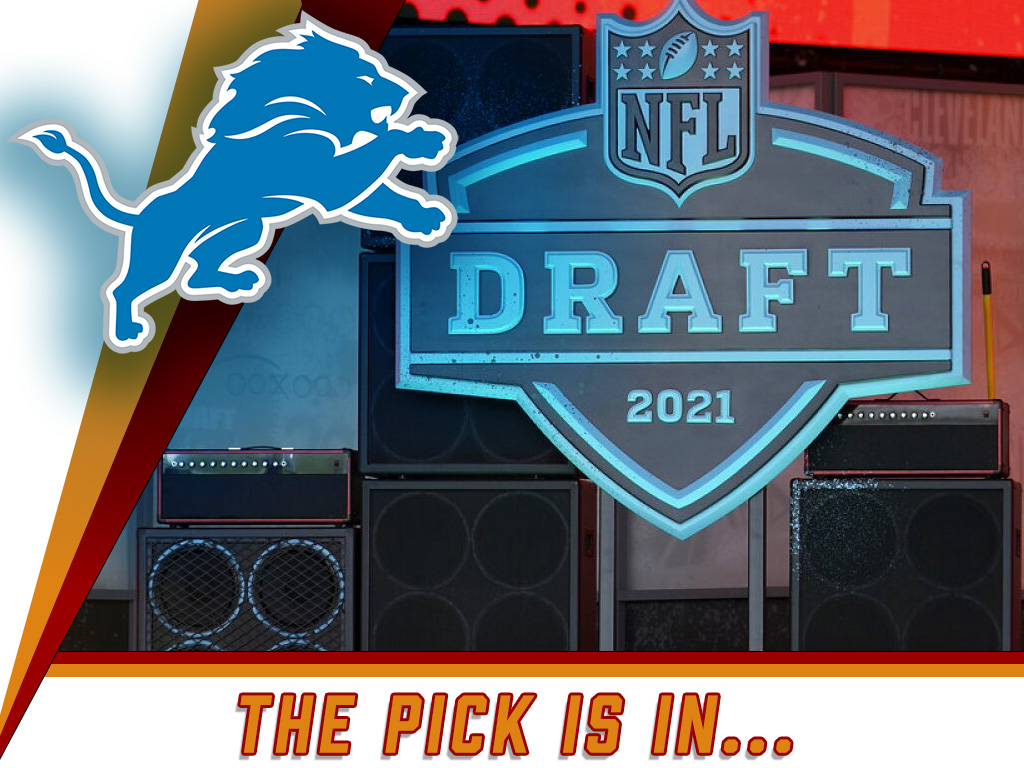 The draft order used in this article reflects the order prior to NFL Week 12. Credit to the mock draft simulation goes to The Draft Network. Team needs are also generated from this site. Compensatory picks have not been assigned and will not be included in this exercise.

The Detroit Lions need offensive playmakers, particularly a QB and receivers, and the defense needs a little bit of everything. D’Andre Swift is a superstar RB and TE T.J. Hockenson is a stud. The offensive line has been a bright spot, and 2021 top pick Penei Sewell will anchor the line for many years. The defense has solid players but few top options and needs to be addressed heavily via the draft or free agency.

Every mock draft I have seen has defense going heavily in the first five picks, and most have Oregon’s beast Kayvon Thibodeaux going here. I can’t see the Lions passing on a chance to take a franchise QB.

Corral is my top QB, and although not the safest, I believe he has the highest upside to be a franchise QB. Corral has thrown for over 3,000 yards and nineteen scores against only three picks in his third season as a starter. All of this with a decimated receiver corps and against SEC defenses. Oh, he’s also rushed for over 500 yards and ten scores. The dude has wheels.

The Lions should keep Goff another season and let Corral ease in but will be tempted to end the experience and hand over the reins. Corral is a gun-slinger and not afraid to push the ball downfield. He’s dangerous as a runner, and his teammates love him. He plays with fire, passion and will give the Lions a player to build a dangerous offense around.

The Lions draft again in the first, and I have them getting a potential difference-maker on defense here. In 55 games thus far at Southern Cal, Jackson has 12.5 sacks and 24 tackles for a loss. He’s a versatile pass rusher, and at 6’5” and 260 pounds, he can play with his hand in the dirt or standing up.

The head coach wants to establish an identity and a kneecap-busting defense starts with a ferocious pass rush. Jackson will give the Lions a big step in the right direction. I already mentioned the versatility, but his athleticism at his size is pretty ridiculous. Jackson can bend the edge, has a sick spin move, and can also rush inside. He won’t win as much in the NFL with his power, but his agility and speed will make Jackson a successful pass rusher.

Pickens is the top receiver in the draft and an early first-round pick on sheer talent alone. Maturity issues and an injury that cost him this season (so far) has dealt his draft status a hit. The Lions pounce here, grabbing the Bulldog and giving them an alpha dog receiver they desperately need.

Pickens has good size at 6’3” and 200 pounds but plays physical, and his length allows him to make some incredible catches. He can high-point with the best of them and has a tremendous catch radius. Pickens catches anything in his remote vicinity. He runs routes with impressive suddenness and is a bear to bring down after the catch.

I love Catalon, and if the Lions can grab him in the third round, it’s a huge win for this team. I doubt he makes it this far, but in this exercise, he’s on the board and is a player Dan Campbell will LOVE.

Catalon plays mean and is dangerous but mixes that with intelligence and power. If you get a chance to see a Razorback game, you see Catalon everywhere on the field. He can line up at either safety spot and hang with receivers and backs. And if you have the ball, you find out where he is very quickly. Catalon has phenomenal closing speed and can hit. At 5’10” and 200 pounds – he reminds me of former Colt Bob Sanders. Catalon plays hard and can lay the wood.

As far as offensive linemen, I let others do the scouting as far as details. Watching the Hokies, you can see Smith get work done and notice his athleticism. He moves well laterally and has a good burst off the snap. He absorbs hits well and doesn’t give up ground – Smith has excellent balance and recovers well. The Lions will love his versatility and athletic ability, and he should be a great depth piece and possible starter.

At this point, the corners available are all projects and depth guys; Taylor-Stuart is not an exception. He is long and lean at 6’4” and 205 pounds, but his speed is his strength. He has some wicked wheels, and his acceleration is ridiculous. That’s enough to earn him a roster spot, but he will need some work. Taylor-Stuart relies too much on that speed and acceleration, and his unrefined game is why he’s still available this late in the draft.

I didn’t love any of the WRs available here at this point in the draft, but I love the versatility and speed of Ealy at this spot. The Lions have Swift and then a gaggle of backs who can produce in a limited fashion – Jamaal Williams and Jermar Jefferson, most notably. Williams will be gone likely after 2022, and Jefferson is a good depth back. Ealy is a smaller back at 5’8” and 190 pounds and brings explosiveness in spades. He’s averaging over six yards a carry this season and has 25 receptions – plus Corral is familiar with him. The Lions can use Ealy all over, including in the slot, and get him in space. He would add an explosive element the team is sorely missing.

It always felt like Smith was on the verge of breaking out and establishing himself on the Buckeye defensive front. He’s got the size at 6’3” and 260 pounds and has a crazy active motor with power. Smith played alongside some phenomenal lineman and never seemed to finish plays and put up numbers. He should start early and be effective, hopefully taking the next step at the NFL level. Otherwise, Smith will be a rotational defensive edge rusher only brought in on passing downs.

Miller played little this season due to a torn pec, and his draft stock has taken a hit due to it. Miller is a player I will be targeting for every team at this point in the draft – I love him! He’s fast and, as a blitzer, incredibly disruptive. Miller is one of the best tacklers in space amongst the LBs in the draft. He needs to work on coverage. He’s a bit stiff and not as fluid as required. Miller should be a good OLB and never be a huge fantasy producer, but a big help to the Lions defensive unit.

Austin is another of my favorites and a player I would love for any team to have. Okay, let’s get it out of the way – the dude is 5’9” and tips the scales at a whopping 165 pounds. That is the ONLY reason he’s still available in the seventh round. Austin can ball out – he’s built compactly and can take hits and is one of the most cerebral WRs you will see. He is excellent at finding spots in the defense and working back to his QB. When he gets the ball, Austin is incredibly dangerous. He has explosion and never gets hit head-on. He is quick and elusive running, a threat to score every time he has the ball.

Dale is an excellent pickup for this late in the draft and a player who will be more effective in the NFL than as an IDP asset. He’s a strong lineman with good technique and gets a decent push in pass-rush situations. Dale is a strong tackler but gets caught up when engaged and can’t break free. He’s a bit “small” at 6’3” and 300 pounds for the middle of Detroit’s 3-4 but could rotate in and provide depth.

Drafting a QB and a few impact playmakers will satisfy a fan base long tired of losing, and then the rest of the draft fills holes and makes the whole team better. The era of offenses methodically plodding down the field is long gone, and Detroit needs to become more explosive.

Corral will push Goff out quickly, and Pickens gives them a legitimate alpha they’ve been missing since Megatron’s departure. Ealy and Austin are smaller players who could be used as slot weapons or extra backs on third down. They will couple well with the players Detroit already has and give offensive coordinator Anthony Lynn a cabinet full of toys to scheme with.

Jackson and Catalon will be impact players immediately and give the Lions a few guys to begin revamping their defensive identity with. The team is a long way off, and free agency could be a great way to add more depth.

Alex Anzalone leads the team in tackles with 64 but isn’t signing beyond the season. Tracy Walker is a bright spot at safety but will be a free agent. Trey Flowers never lived up to expectations. I could have drafted all defensive players, honestly.

The Lions need a lot of help, and I attacked needs relentlessly in this exercise. The team could forgo QB and take the best player in the draft – Thibodeaux. Or they could go way out in left field and take Malik Willis. The Lions have not drafted well in many years and have never utilized talent. The team wasted Barry Sanders, Calvin Johnson, and most recently, Matthew Stafford.

An entire team build is needed, and this draft above would be a solid start. The Lions will be on the clock at 1.01 soon, and I don’t see this current team winning more than one game this season.