The Texans have needs on both sides of the ball – who does Dwight Peebles think they should target? 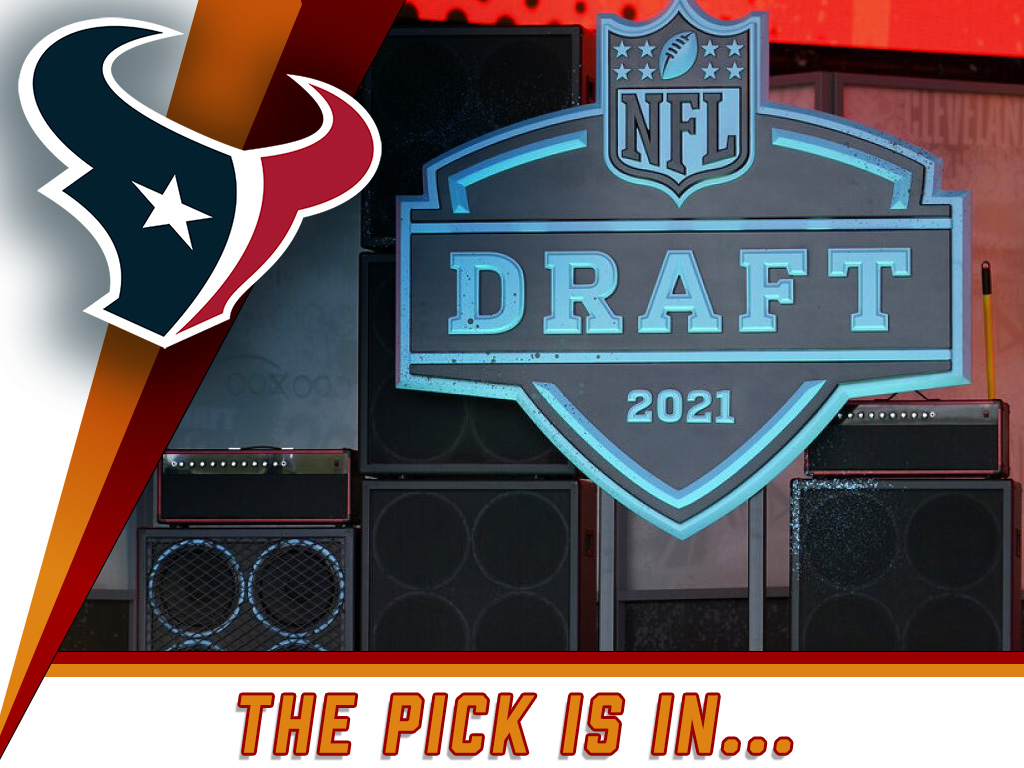 The draft order used in this article reflects the order after NFL Week 18. Credit to the mock draft simulation goes to The Draft Network. Team needs are also generated from this site. Compensatory picks have not been assigned and will not be included in this exercise.

The Texans went a surprising 4-13 in 2021, maybe the record isn’t as astonishing, but the team’s level of competitiveness was. They defeated division-winning Tennessee and took out the Chargers in the last few weeks. Rookie quarterback Davis Mills was a massive surprise, and the team could ride with him going forward.

Getting rid of the albatross of Deshaun Watson ($51 million dead cap!) will likely be the offseason’s biggest task. They were led by a veteran quartet of Rex Burkhead, Mark Ingram, David Johnson, and Phillip Lindsay on the ground. None were spectacular, but Burkhead did provide some value down the stretch. All could not be with the team in 2022 also.

And once again, Brandin Cooks found a way to get 1,000 yards receiving. Rookie Brevin Jordan showed some spark in the latter half of the season. On offense, there are a few pieces, but many more are needed. And defensively, the unit is older but has a few solid pieces. The team could use help in many areas.

No matter what the Texans’ brass thinks of Mills, getting a franchise offensive tackle is ALWAYS a sound decision. Neal is that, and someone Houston can build their offense around. I like a few of the QBs in the draft but not at this spot with Neal on the board. Neal has the length needed for the position and his mobility, particularly in pulling, is phenomenal.

The entire offense benefits with the addition of this former five-star. Pro Bowl tackle Laremy Tunsil has two more years on his contract, but the Texans could inexpensively take an out after 2022. Neal could slide over to left tackle, and Houston has the makings of a cornerstone for their offensive line.

I went with the best player available here and was shocked to see the former Bearcat corner here. Gardner has the mental makeup to be a top corner and is aggressive. He didn’t allow a TD in college, although he did play mostly against Group of Five competition. Testing will be critical – if he tests over 4.5 in the 40-yard, he could fall drastically down boards. With as good as he has looked, the ability to recover and make up speed against the faster receivers in the NFL could take him from a top corner to a solid CB2 in the NFL.

Ebikite transferred from Temple to Penn State and was a nasty edge rusher for the Nittany Lions in 2021. He tallied 62 tackles, 18 for a loss, and got to opposing QBs 9.5 times. He also forced a pair of fumbles. Ebikite is aggressive, tenacious, and has a great combination of speed and quickness. One of the most impressive things is the variety of moves he has a pass rusher. He has long arms and can get under lineman, swat away counters, and he moves well laterally. And he’s strong as heck, too, can tackle anything thrown his way.

I could see Ebikite destroying the combine, most Happy Valley college prospects do, and his stock could skyrocket. Either way, if the Texans can add him, it’s an excellent piece for a defense that needs a lot of help.

Spiller will NOT make it this far in the NFL Draft unless he has a poor combine or pro day, and I snapped him up very quickly when I was on the clock. Spiller is my RB1 in the class, and he’s built to be a three-down back from day one. He will allow the Texans to streamline their RB room.

There is a lot to love about Spiller’s game. He is 6’1” and weighs in around 215 pounds. He is surprisingly agile for his size and loves to get physical. Spiller will be able to handle a good workload and can catch passes. His hands are soft and sure, but he does have a limited route tree. Spiller is best getting north and south quickly and is tough to bring down. He will need to work on blocking and, at times, looks a little indecisive and will dance around a bit when he needs to get upfield.

With this pick, the Texans will get their RB for the next 5-7 years, and coupling him with a third-down specialist like Burkhead would be a solid duo.

Now we get to the meat and potatoes of the draft, and taking Barno in the fourth round gives the Texans a versatile defensive piece. At 6’6” and 240 pounds, he’s got a long frame to add weight but will likely operate initially as a standup linebacker. His explosion is ridiculous; he accelerates with purpose and is relentless in pursuit. When Barno goes inside to rush, he is quick, has strong hands, and is solid as a run defender.

I love his vision, and he’s an intelligent player. He keeps himself in plays with pursuit and various moves to disengage from blocks. His size will likely be the biggest question, and Barno could have a tremendous combine performance. His versatility would be a huge asset for a rebuilding defense like Houston’s.

Corker is an intriguing prospect at safety, and I think he has the potential to develop into a good free safety in the NFL. He’s an intelligent player with has good instincts. He plays disciplined and anticipates plays as they happen. He’s a tough player with good quickness and is not afraid to play receivers physically.

With that said, Corker has a lot to improve on – his footwork is suspect and can cause him to get exposed in coverage. He wants to hit hard when sometimes he should wrap up. His instincts are good, but his reaction time is a tad delayed and can get him in trouble.

As a Spartan fan, I have watched a few players in this draft class as much as Nailor. I was surprised he opted out, but there is a lot to love about him. He is the perfect WR3 in an offense. Nailor is one of the best route runners in the class. He is polished and always where he is supposed to be. He’s a big-play threat and has sure hands. Houston needs WRs of all types, and Nailor is an excellent complimentary piece for their offense.

Bolden was a player I was high on before 2021, but my expectations have been tempered. He’s a solid safety who closes ground quickly and is great in pursuit of ball carriers. He is incredibly quick and breaks on the ball well. Bolden isn’t the strongest player and doesn’t have enough speed to recover when beaten on a move. He looks for the hit too often rather than wrapping up and can get lost in traffic on plays.

This pick is mainly to see if our Lead Editor Dennis fires me; he almost did for the Tagovailoa pick a few weeks ago. At best, Purdy is a solid NFL backup and plays incredibly similarly to Mills. He’s a mobile QB with a good arm but struggles with consistency and reading defense. Purdy could hang around the NFL for a while. He has talent but hasn’t been able to put it all together.

The Texans go into the draft with many needs, and I went with the best player available approach nearly every pick. I do believe Mills has the tools to be a successful mid-level starting QB in the NFL, so protecting him and getting him weapons is key. The Texans would be wise to keep Cooks and one or two veteran backs. They have some salary cap room. Resigning Tyrod Taylor would be good for developing the young signal-callers as well.

For fantasy implications, Spiller would be a top-three pick in rookie fantasy drafts and has a good situation where he should see a substantial workload. Nailor doesn’t move the needle for me in fantasy but is a good stash.

The defensive guys will likely not be IDP producers either, all are good for the NFL, but the only one I would grab is Ebikite, later in rookie drafts. He should have a fairly safe floor and be a DE/EDGE starter down the road.