Dwight Peebles takes a look at a direction the Dolphins could take in the 2022 NFL Draft. 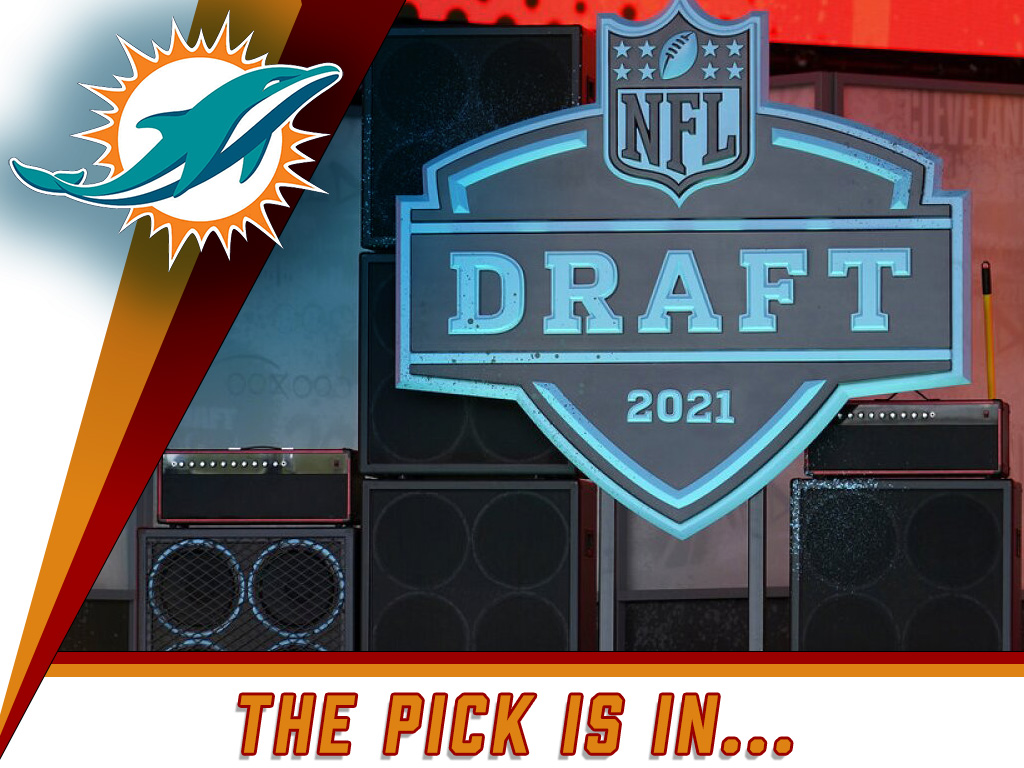 The draft order used in this article reflects the order before NFL Week 15. Credit to the mock draft simulation goes to The Draft Network. Team needs are also generated from this site. Compensatory picks have not been assigned and will not be included in this exercise.

The Dolphins are a team on the ascent and have had a fruitful draft the past few seasons. The team still needs a game-breaking WR and a more consistent three-down RB. The line on both sides of the ball should be addressed and continue to beef up.

If the Fins somehow can snag Wilson at this point in the first round, the team will be set at WR for a decade. Wilson’s skillset will compliment Jaylen Waddle’s and form one of the most dangerous pairs in football.

Wilson is a complete receiver with an advanced technical grasp of the game. His route running is crisp, and his release off the line is fierce – he has short-area quickness, great footwork, and is tough to engage. Wilson is so dangerous after the catch and a nightmare to tackle in the open field. He could play the slot, but I love him also on the outside, opposite someone like Waddle.

The Huskies have a good track record of producing NFL corners, and McDuffie is another good one. His instincts stand out when watching his game tape. McDuffie uses his eyes well and doesn’t waste many steps, using angles well. He knows where he needs to be and where his help is coming from. I believe he will be better suited to slot and guarding the opponent’s second option if outside. McDuffie is solid but not a spectacular athlete and doesn’t have the speed to recover against receivers with speed. His smarts and natural feel for the position will get him on the field early.

Miami takes a shot at improving the pass rush with these picks here. First up is Cox, an outside linebacker most likely at the next level. He played as a defensive end and LB with the Gators but has enough athleticism to play more standing up in the NFL. Cox has a nasty bull rush, is incredibly fast around the edge, and has long arms to get under linemen. He is a fierce tackler, and his first step is lethal. And he has a great spin move in the pass rush.

Add all that into the ability to drop back in coverage, and Cox will find himself in that spot, most likely on Sundays. His play recognition is questionable and will limit what he can do, but as a pass rusher, Cox will be a valuable asset to whichever team lands him.

Mafe is a player I have been high on, but he hasn’t really taken a step forward to evolve into what I hoped he would be. His explosion off the line, the first step, is absolutely ridiculous. Mafe is country strong and has the weight room numbers to show it. Yet he can’t fight through double teams and is engaged far too often.

He’s another player the Dolphins can rotate in and form a more potent pass rush. Mafe is smart and reads plays well. I would like to see him use the strength and speed to counter and disengage lineman better. He needs to fight through and not give up – Mafe could have a bright future, or he will be out of the league by 2025.

Stueber has been good in pass protection, but his run blocking has him projected as a day-three guy. I like him here, maybe a tiny reach, but he does have intriguing upside and can play guard or tackle. The game is much more reliant on passing, and to keep their young QB healthy, a lineman with only excellent pass blocking chops isn’t a bad thing. At first, Stueber will be a solid rotational lineman, with hopefully a future starting position with development.

I absolutely love Rose; he’s an old-school thumping LB. He has been one of the most productive defenders in college football the last few seasons. Rose is a complete LB, great in run defense, and has tremendous motor. He’s a sound tackler and sheds blocks quickly, never afraid of contact either. Rose has the range and instincts to be productive in coverage, yet I think the NFL game may test him in that area. Nobody prepares as Rose does, and his instincts show it.

There are few players I love as much as White in this draft. He’s an older back, he will be 24 going into his first season, but he’s got a skill set that sets him up to succeed in the NFL. White excels in pass-catching, has good vision, and can break big runs on every play. He doesn’t create independently and hasn’t faced many formidable defenses, but I could see him impacting Miami. White could be a three-down back but likely is more of a leader who will handle most of the touches in a backfield with another back.

Honestly, the Dolphins need a backup QB, and this one was just a fun pick staring me in the face when I got on the clock. The younger brother of the Dolphins’ starting QB, Tagovailoa, would be a good backup for his older sibling. He is a mobile QB who throws well on the run but isn’t the most consistent player. Taulia looks like a good prospect at times and can carve up some decent defense. But other times, his passes are off the mark, and he is prone to huge turnovers. Bottom line, it’d be a fun story – so why not? Give me Tua and Taulia for the Dolphins!

The Dolphins have been one of the better teams in the NFL over the past few weeks, winning their last six games. The line has been playing well, Tua seems to be settling, and Waddle has been phenomenal. Adding Wilson and White will help the offense immensely. We could be seeing a scary offense with young pieces develop.

Rookie Jaelan Phillips leads the team with 8.5 sacks, and end Emmanuel Ogbah has chipped in seven. Ogbah will be a free agent and may not return. Adding Cox and Mafe will allow the Dolphins to rotate pieces in and out, keeping three young pass-rushers fresh. Rose will help fortify the linebacking corps alongside leading tackler Jerome Baker. The defense is also young and coming into form.

The Patriots have owned the AFC East, and Buffalo was posturing to take over supremacy. Meanwhile, the Dolphins have positioned themselves to make a run as well. A few offseasons ago, they sold the farm, and accumulated draft picks. It looked like the management was crazy. Yet here we are, and the team is loading up with young talent and could finish 9-7 after going 10-6 in 2020.

The Miami Dolphins could take a massive step in this year’s draft and challenge for not only the division but the Conference. They could take many options and directions in this draft, and I went through several drafts I loved. It’s easy to draft with this team, and the Dolphins have been killing it.