As we reach the back half of the 2021 season, it is time to look ahead to the draft. @DanT_NFL takes us through a full seven round mock draft for the Cleveland Browns. 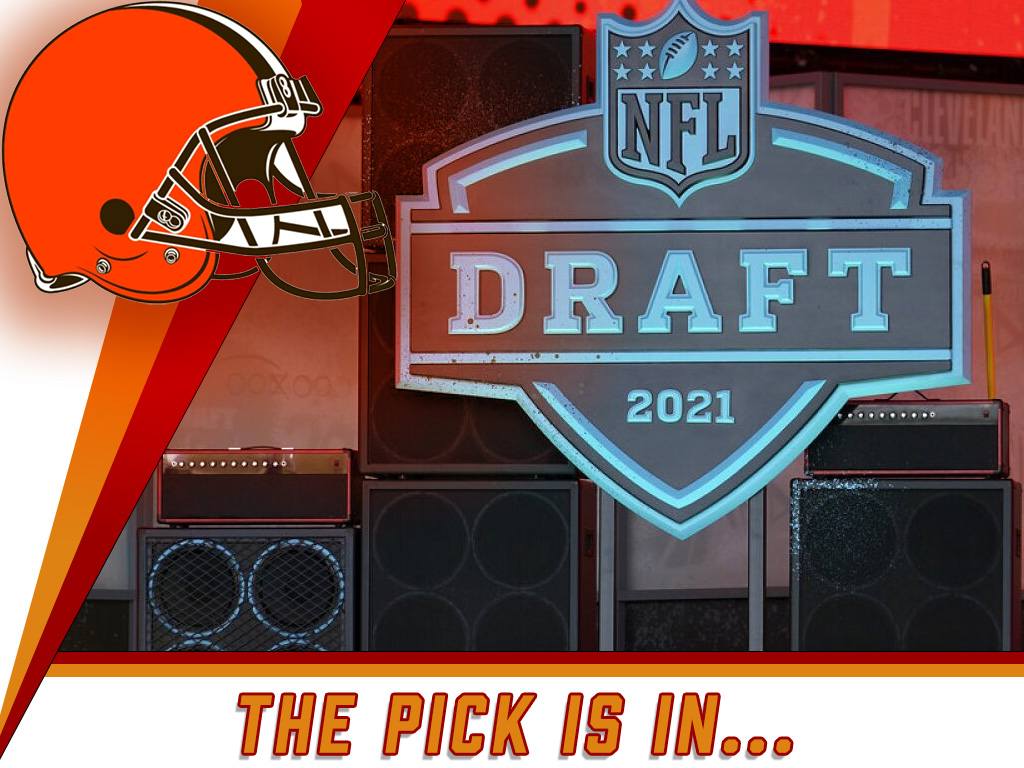 Draft order used in this article reflects the order prior to NFL Week 11. Credit to the mock draft simulation goes to The Draft Network. Team needs are also generated from this site. Compensatory picks have not been assigned and will not be included in this exercise.

The Cleveland Browns enter the 2022 NFL draft with needs along the defensive line and some playmakers at the wide receiver position. Luckily for them, this class has decent depth in both positions. The Browns currently hold eight picks in the 2022 draft. Based on the current record, they will be picking in the middle of each draft round. These were the players we could add to the roster with the 2022 NFL draft.

The Browns can select interior offensive lineman Davis from the University of Georgia with the sixteenth pick. Davis is the rock in the center of this #1 ranked Georgia Bulldogs defense. He is a large man measuring at 6’6” and weighing 340 pounds. He will be an immovable object when stopping the opponent’s rushing attack. I particularly love a quote from NFL draft analyst Daniel Jeremiah regarding a player like Davis. To paraphrase, “he can have a terrible day of practice and get beat on every rep, but the next morning he will still wake up at 6’6” and 340 pounds”. You can’t teach size.

Despite his size, Davis possesses agility and quickness. He would best be a two-down defensive lineman who would come off the field in obvious passing downs. Davis is very difficult to move off of his position and will be a true menace in the running game. Once engaged in a position, it is very hard to move him off of it. He is able to leverage his size and length to work all areas of the interior defensive front.

In the second round, the Browns can grab Enagbare, an edge defender from the University of South Carolina. Myles Garret is arguably a top three edge defender in the league and being able to add opposite him will really help this defense get after the quarterback. The 6’4” 265 pounds senior is winning at a 27.3% pass rush win rate and is a headache for opposing offensive lines. With Garret under contract until 2026, these two would make a formidable duo for the entirety of Enagbare’s rookie deal.

Enagbare is an excellent athlete that lacks some polish in his pass rush techniques. He must learn to more efficiently use his leverage and positioning to get after the quarterback. However, he does possess a decent toolbox of rush techniques including spin moves and hand swims. He will do well to learn under a prolific pass rusher such as Garrett and should find himself as a starter by year two of his career.

With the 78th overall pick, the Browns are finally able to add some firepower to their offense. Tolbert is a 6’3”, 190 pound Junior from the University of South Alabama. He has broken a thousand yards receiving each of his last two seasons and even has five games this year with over 100 yards in each. Throughout his career he has been able to command the majority of the receiving production, which is a very good sign for future production at the professional level.

Tolbert possesses the long speed needed to take the top off a defense and that is exactly what this Cleveland Browns team could use. He has the size and athleticism needed to high-point any ball thrown his way. As well as extremely sticky hands allowing him to win in any contested catch situation. Jalen struggles a bit getting separation in man coverage and will benefit from a scheme that can exploit soft areas of zone coverage. He will fit in amazingly with the Browns and could be an immediate day one starter.

With the first of two fourth round picks the Browns add some much needed depth to the secondary. Daniels is an extremely athletic corner from TCU. He is an exceptional track star, running a 10.34 100m dash. He is also a key contributor to special teams. Daniels is a raw athlete that will take some development time to see the field as a rotational corner. In the meantime he can contribute to the Browns day one using his speed on special teams. Andrew Berry loves speed, he drafted the fastest man in the draft Anthony Schwartz in 2021. Daniels may be the least surprising pick of the Browns 2022 draft class.

With the second pick of the fourth round, the Browns take a gamble on another player coming off of some injury concerns. Ross is a 6’3” and 205 pounds, a red-shirt senior from the University of Clemson. The main concern with Ross’s profile is the surgeries that he has already had in his young career. In 2020 he had surgery on his back to repair a congenital fusion and is currently undergoing foot surgery that will cause him to miss the rest of his 2021 season. All reports indicate that he will be ready to go for the Combine and the rest of the NFL draft process.

Ross broke out as a 18 year old freshman recording a thousand yards that season. He capped that season off with 6 receptions for 148 yards and two touchdowns in the national championship semi-final against Notre Dame. He followed that performance with six receptions for 153 yards and one touchdown in the National Championship game against Alabama. If he can recover and become the player we have seen he could be, he will be a real difference maker for the Cleveland Browns.

The Cleveland Browns get some depth for their safety room in the fifth round. Richardson from Texas A&M is a big versatile safety that can be played all over the field. These are the types of traits Andrew Berry and this front office love to key in on. Previous examples of this would be Jeremiah Owusu-Koramoah in the 2021 draft who is a bit of a linebacker/safety hybrid. Richardson excels in the run game, but has some struggles in coverage. He would best be deployed on early downs where he can cheat towards the box and help with the run.

With their sixth round pick the Browns selected Jarrett Patterson, center from Notre Dame. Patterson is a senior and the only returning starter from the 2020 Notre Dame starting line. Despite a new cast around him, Patterson has been able to see success in the 2021 season. With J.C. Tretter being a free agent at the end of the 2022 season, the Browns would be wise to begin spending some draft capital finding a replacement. Offensive line coach Bill Calahaan has done some magic work with lineman in the past. Even transforming former fifth round pick Wyatt Teller into one of the best guards in the league. Patterson could take the season to sit and develop and might one day become the starting center for the Cleveland Browns.

The final pick of the 2022 NFL draft will be spent bolstering the very important running back room. The Cleveland Browns offense runs through the running backs, so depth is always needed. Rachaad White is a 6’2” 210 pound senior running back from Arizona State. White was a JUCO transfer and joined the Sun Devils in the 2020 season. He has been having an amazing senior year and is on pace to break a thousand yards rushing with two games topping 180 yards apiece.

White has been often overlooked by the draft community due to his transfer status and older prospect age. If you watch his film you will see that he has good athleticism and agility and would thrive in a run heavy offense. He would benefit from a strong offensive line and a team that runs a lot of play action and zone running. Both things the Cleveland Browns excel at. With both John Kelly and D’Ernest Johnson set to hit free agency, White is the perfect depth piece for this team.

Obviously any time you can get the ball in the hands of your offense, you possess the ability to score fantasy points. With three picks in the first two days, the Browns are able to grab two upgrades along the defensive line that will improve time on the field for the offense. The Browns currently rank 11th in total defensive snaps in the league. An improvement on defense will hopefully improve this ranking. Improved time on the field will hopefully lead to more offensive production for key players like Baker Mayfield, Nick Chubb, Kareem Hunt, and Jarvis Landry.

The wide receiver room for the Cleveland Browns will be bolstered by two mid-round selections in Tolbert and Ross. They will join a receiver room that has Jarvis Landry, Donovan Peoples-Jones, Rashard Higgins, and Anthony Schwartz. The team may be looking for Landry to restructure his deal or they could cut him with only a dead cap hit of $1.5 million. Ross would not be relied upon as a day one starter and can take whatever time he may need to ensure his health is top notch before hopefully recouping that freshman year magic.

This may be a less than ideal landing spot for these players from a fantasy football perspective as receivers on this offense have been struggling to produce anything for their dynasty managers. Landry has been the biggest producer and he only finished as WR33 last season under Stefanski’s offense. If we want to talk about ceiling, we must look at 2019 when Stefanski was the offensive coordinator for the Minnesota Vikings. During that season we saw Stefon Diggs finish with over a thousand yards and finish as WR24. Adam Theilien was injured during the year, but was on pace to easily break a thousand yards. If Stefanski can unlock Mayfield and this offense, the WR1 and WR2 in this offense have top 24 upside, but even that may be a reach. This landing spot would put Tolbert outside my top five wide receivers for dynasty rookie drafts, despite having second day draft capital.

White is a nice depth piece for this Cleveland Browns offense. For fantasy purposes he is a great dart throw with your last picks in any rookie draft. We have seen D’Ernest Johnson seize opportunity via injury and provide his managers with RB1 starts. Johnson and Kelly may be gone from the Browns after the draft. That would leave Chubb, Hunt, Demetric Felton, and White as the primary backs in this offense. Were Chubb and Hunt to miss time in the 2022 season, I am fully confident that White would provide RB1 weeks for his managers. Unfortunately, injury is the only way he will become fantasy relevant. A perfect justification for a fourth or fifth round rookie pick.