Mitchell Trubisky was black balled out of Chicago and after a year away in Buffalo, he is ready and willing to make an impact in Pittsburgh. 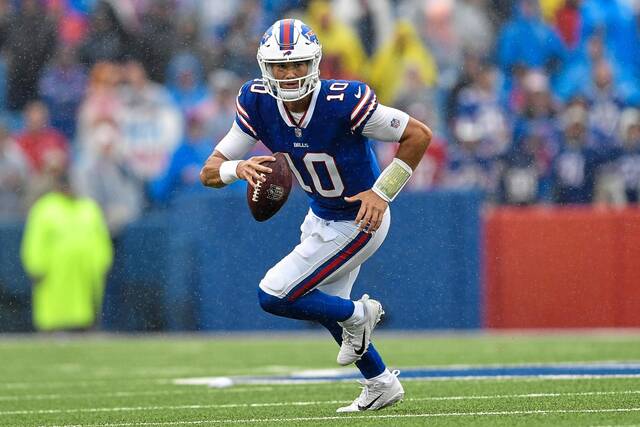 The Steelers have been through the wringer the last couple of years on offense with Ben Roethlisberger under center. Yesterday, in free agency, they found their next quarterback in Mitchell Trubisky.

Trubisky signed with the Steelers for two years for $14 million. Play incentives could make that number a whopping $27 million. The team still has Mason Rudolph and Dwayne Haskins on the roster, but Trubisky is seen as a clear cut above them, and this signing cements that. Trubisky has one Pro Bowl season in his career and a career record of 29-21. He has shown he can be a dual-threat when the time calls for it too.

Pivoting that over to a fantasy side of things, it could open up this Steelers offense in a manner it hasn’t seen since Roethlisberger tore his UCL in his elbow. Trubisky has a good and rested arm and has proven to produce fantasy numbers for his receivers. It bodes well for Diontae Johnson and TE Pat Freirmuth. Johnson saw 169 targets last season with 107 catches but just 1,161 yards. With Trubisky, that number could be well north of 1,400 yards, and we may see a top-end WR1 season for the kid out of Toledo.

The biggest winner in all of this is Najee Harris, who, despite having 1,200 yards, did so on just 3.9 yards per carry. Like Johnson, we may see him take his game to another level. Trubisky would allow opposing defenses not to stack the box, as they did against Roethlisberger. If that gives Harris a yard per carry bump to 4.5 it could be huge. If he replicates his 307 carries, he is looking at 1,382 yards. Pair that with the receiving work he is bound to get, and we may see competition with Jonathan Taylor for the top RB in the dynasty.

For Mitchell Trubisky as a whole, he isn’t going to win you any league titles. But he will be the rising tide that lifts all ships in this Steelers offense next year.