A few WRs highlight the latest free agency signings, what does this mean for each of them in Dynasty football? Andrew Harbaugh breaks down the Allen Robinson, JuJu Smith-Schuster, Russell Gage, and James Washington signings. 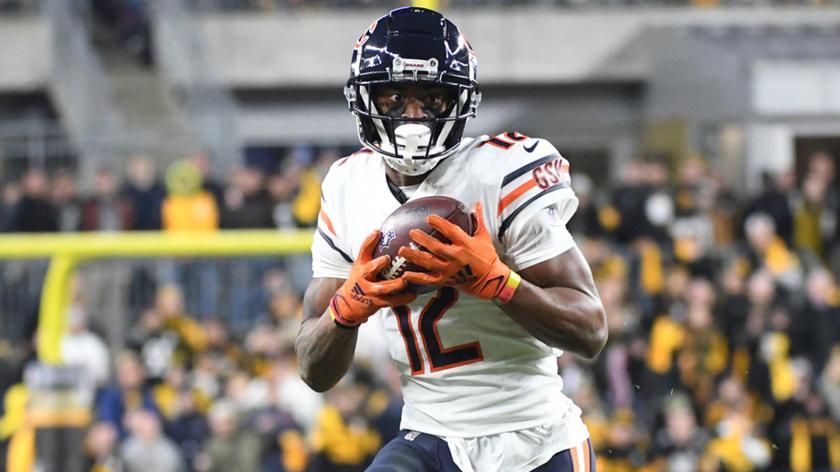 It has been over a week since NFL free agency started unofficially, and it feels like we are in a completely different universe after all the player movement. Quarterbacks have been moved more than ever, and trade requests have been made, which shows to be aggressive. The arms race at the receiver position is at an all-time high to top things off.

The aforementioned arms race was mentioned by Trevor Sikemma and Conor Rogers on the PFF Stock Exchange. What the Bills and Chiefs did in that game and the number of weapons they had to do it. Since then, teams have been in a flurry collecting playmakers.

We have seen a ton of big signings at the receiver and tight end position. Guys like Evan Engram and Christian Kirk, both of which by the Jaguars, are proof of that. After they signed, though, there was a pause due to Kirk’s deal freezing the market. Days passed, and then things heated up after a flurry of signings. Now though, it is worth touching base on fantasy value.

Russell Gage to the Buccaneers

The abrupt and loud departure of Antonio Brown left a hole in the Buccaneers’ offense. Russell Gage should be able to fill it though. It is projected that Gage will fulfill the role he left open, which has many people excited in Tampa Bay. Gage saw his last season in Atlanta earn him several of his career highs, and coming off that season expectations are high now. With Tom Brady coming back, it will undoubtedly help his fantasy value, but this is earning a buyer beware from me in terms of fantasy shares.

Allen Robinson to the Rams

This was laughable when I got the tweet alert, just further proof that the salary cap is imaginary. Enough about my rant, though; this is just insane of a combo to think about. The Rams traded away Robert Woods, leaving the WR2 door wide open for Robinson in the flashy Rams offense. I think opposite Cooper Kupp, Allen Robinson could provide some WR1 type numbers, thus worth a hold. But, if you hold shares and are worth pursuing them, if you are on the fence about it. Robinson presents an entirely different skill set that complements Kupp, and we have seen how Matthew Stafford supports his big-bodied receivers.

Juju Smith-Schuster to the Chiefs

It is seldom that a WR signing pans out from a fantasy perspective. If I had to bet all my money on one that will, it is this one. Juju Smith-Schuster was forgotten about during NFL free agency, but the Chiefs knew exactly where they sat with him. The Chiefs had lost Byron Pringle to Chicago in free agency, so they had a hole in the WR2 role, and now Smith-Schuster steps in. Fantasy projections will be tough with him as he has been hot and cold. Smith-Schuster should be able to provide consistent receiving stats for your team. Just how much is the question.

James Washington to the Cowboys

This signing got completely buried in the news cycle, but it deserves to have some light shed on it. James Washington started to emerge in the Steelers offense this past two years. Ben Roethlisberger had played like a shell of himself holding him back. Now, the Cowboys’ offense may produce more fruitful fantasy relations. He would be filling in the WR3 role with the departure of Cedric Wilson to Miami, thus making him a fun flex play week-to-week and spot starter next year.