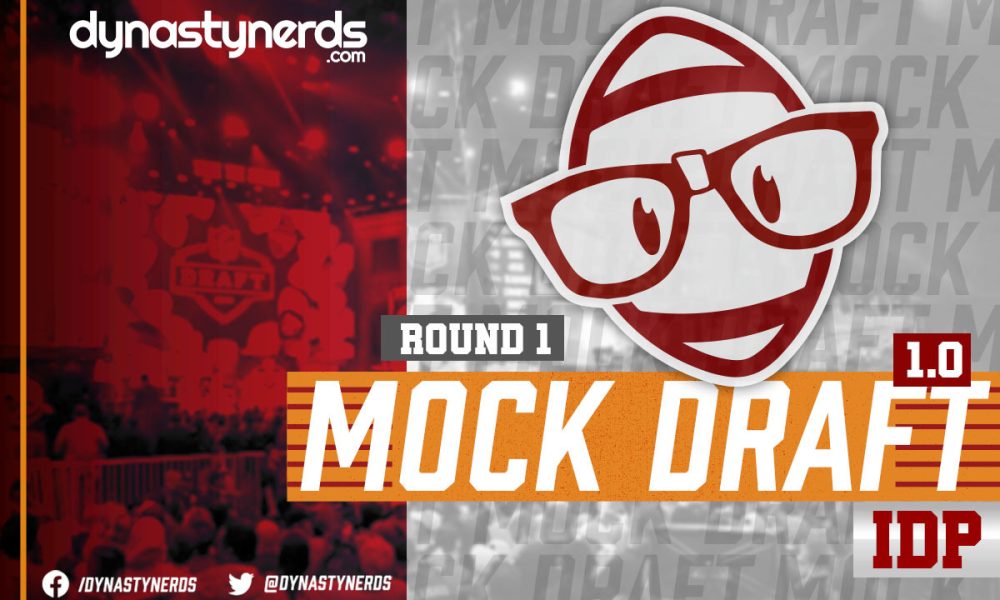 The NFL Draft is officially over, and it’s about that time for rookie drafts to get started. It’s always exciting when you can add new players to your dynasty rosters as you prepare for the next season. As an IDP dynasty manager, I know how difficult it can be not to have as many resources when it comes to Rookie ADP for defensive players. I asked a group of my IDP league-mates and colleagues to help put something together. This is a three-round, IDP-only rookie mock draft performed on Sleeper.com. I put together a few thoughts on a few players and where they were drafted. Hopefully, this can help the people feel a bit more comfortable heading into their rookie drafts that have IDP.

That was quite a run on defensive linemen in the first round. Six of the top 12 IDPs are EDGE rushers. I’m more of a Kayvon Thibodeaux fan. We should see him and Aidan Hutchinson go one and two in nearly every rookie draft. Dynasty owners who have been playing IDP for a while understand how important consistent fantasy production from your defensive line position is.

The impact of recent rookie defensive backs has IDP managers drafting the position earlier and earlier. Kyle Hamilton and Lewis Cine both end up in the top 8 picks overall. Both defensive backs are projected to be instant production rookies.

My favorite pick of the first round goes to @KBelf54, who made sure not to pass up on a potential IDP superstar Kyle Hamilton. There could not have been a better landing spot for the former Notre Dame defensive back. Kyle Hamilton can make plays all over the field. It made the most sense to take him in this spot after the top two defensive linemen, and top rookie linebacker went off the board.

The Round of the LB

This group of veteran IDP drafters wasted no time and went right after the most drafted position in most IDP formats. In the second round, nine of the twelve selections were linebackers. Two defensive linemen and one defensive back were the only other picks in the round. After the top tier of defensive line and defensive back, there’s a nice value at linebacker.

From a pure defensive football fan standpoint, how can you not love Jordan Davis? A man that big should not be able to move the way he does. It’s still up in the air how he produces from a fantasy perspective. As a football fan, he’s going to be fun to watch. Davis only managed 90 stops, 11.5 tackles for loss, and 7 sacks in 41 games with the Georgia Bulldogs. Only four defensive tackles last season finished with 40 tackles or more, and just two defensive tackles finished with double-digit sacks. Davis may struggle to give instant impact production for IDP managers, but he’s a top 12 rookie in this class in defensive tackle required leagues.

After the top 24 IDP rookies are off the board, we see how our drafters try to find value. The third round was the most balanced, with five defensive backs, four defensive linemen, and three linebackers being selected. Going back to 1.11, 11 of the next 15 picks selected were LBs. The third round had some very good value picks at defensive back in players like Daxton Hill and Bryan Cook. Most of the picks in this round are upside plays with the expectation of at least a year or two being stashed on a taxi squad or back end of your roster.

I’m a little biased because it was my selection but Brandon Smith to start the third round was the best value. The Carolina Panthers traded up for him in the fourth round of the NFL Draft, and their weak depth at linebacker should allow him to see snaps as a rookie. The Penn State linebacker will join his former teammate Yetur Gross-Matos on the Panthers’ defense this season.

This was a fun exercise, and I hope this can help you see where to value the IDP rookies this year. One of the most common questions asked of me is where or when do you start valuing rookies in your rookie draft. This year I put together this IDP-only rookie mock draft and a combined offense and defense mock for your reading pleasure. The Dynasty Nerds IDP team wants to ensure you have everything you need to be fully prepared when you are on the clock in your rookie drafts. Thanks again to those IDP analysts who helped me bring you this mock draft, and I hope you take the time to stop by the new Dynasty Nerds discord channel. I will be available to answer IDP questions and more rookie draft questions if you have them.