Dynasty Rewind – Can the Miami Dolphins build on the 2021 season

Dolphins players are on the rise in fantasy. Can they keep up the momentum? @CoachStevenP give you the breakdown. 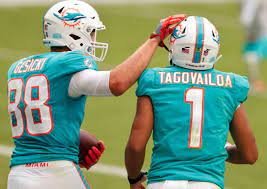 The fantasy football season is over, but dynasty football leagues live on for many of us. Even if you know you enjoy dynasty football (well, you should), it’s still a good time to rewind and review the season that was. We need to answer some critical questions for the Miami Dolphins offense.

Can Tua Tagovailoa be a reliable fantasy QB?

Tua Tagovailoa just finished his second season with the Miami Dolphins. You could say it has been up and down for his career and fantasy. In 2021, he finished as QB26, playing 12 games. While the young QB has shown flashes of great performances, his inconsistency and Dolphins lack of trust cloud his future. It’s time to break down the positives and negatives of Tua’s season and if he can be a reliable QB.

Tua was able to improve on his rookie season in many categories. One category that I love to see in a young QB is efficient accuracy. Tua was able to rank top 5 in red zone, deep ball, pressure, and play-action completion, which are traits many fantasy owners likely wouldn’t see in the scoreboard. Tua always had a strong play for accuracy coming out of college, which could be challenging for many young quarterbacks to thrive early in their careers. His overall completion percentage increased from 63% to 71%, which led the NFL this season.

Another impressive part of Tua’s game was his yards per attempt & yards per completion. His Y/A increased from 6.3 to 7.1, while his Y/C rose from 9.8 to 10.2. Those stats aren’t much off from his fellow draft class draftee Justin Herbert, who at this point is considered a fantasy star. These stats should hold steady as Miami adds talent and protection around the young quarterback.

Lastly, we were able to see flashes of Tua as a possible QB1 type of fantasy player. In 12 games that he played in, he performed as a QB1 four different times. While they were all against bottom eight teams, it’s a step in the right direction. In the NFL today, the expected rapid success of quarterbacks puts a toll on these young players. Tua has been compared with future hall of fame quarterback Drew Brees due to his play style and accuracy. Look below at both Brees & Tua’s first two seasons playing more than eight games, and you’ll see Brees took time before he became great.

Of course, the concern with Tua finishing QB26 on the year indeed has fantasy owners nervous about owing him. He finishes his other eight games as a QB2 or worse, which isn’t what fantasy owners invested in when they drafted him. His game stat average doesn’t shout confidence as he averaged 216 passing yards and one touchdown per game, which comes out to 15.6 fantasy points each game. The offense never showed elite levels; Tua did not air the ball deep often as he ranked 31st in deep ball attempts and air yards. He also only threw four passing touchdowns in the first half of games this year. Miami had issues getting off to a fast start.

The big elephant in the room is the DeShaun Watson rumors will likely appear again. Which lingered all season on Tua’s mind as the Dolphins ownership showed interest in Houston’s star player. Now with a new coaching staff coming soon, Tua’s leash might not be as long as it once was as he heads into his third season.

Tua can be a reliable fantasy asset, but too many ifs and buts might keep that from happening. Tua is a hold at this point since you won’t get the value you drafted him during this offseason.

Is Waddle a top 10 dynasty WR?

100 % he is! While Jaylen Waddle had a monster rookie fantasy season. Let’s start with him breaking the all-time rookie reception record held for nearly 20 years; yes, he did it in only 16 games. Waddle finished 2021 10th in targets and 6th in receptions as Miami’s number one receiver. Waddle had big-play ability written all over his game, but he wasn’t used that way as he finished outside the top 70 (per playerprofile.com) in both yards per reception & target. Those stats both fell under 10 yards which were surprising since he had a ton of big plays ability coming out of college.

Miami was able to find ways to put the ball in Waddle’s hands as much as possible and allowed him to get into open space to make plays. He finished 8th in yards after catch which accounted for about 40% of his total receiving yards. When Miami got down to the red zone, Waddle was a nightmare for defenses which is where he scored all 7 of his touchdowns. He also led the team in red-zone targets, so whoever played quarterback this season often looked Waddle’s way.

Waddle has to be considered a top 10 dynasty receiver moving forward. There is room in his game to improve off his rookie season. One will either be with Tua, who he averaged seven receptions for 70 yards and a half touchdown a game when they both played. If not Tua, the rumors of DeShaun Watson has to get you excited for a monster season they could have together. If Waddle is anything like the guy he beat for the rookie reception record, Anquan Bolton, then Waddle will have a very successful dynasty career. Buy as much as Jaylen Waddle as you can.

Talk about not living up to the potential we all expect. That’s Mike Gesicki as an elite tight end. While Mike Gesicki had a career-high in targets, receptions, and yards, it seems like he didn’t help your fantasy team win games. We, as fantasy owners, have a short memory when it comes to the success of most fantasy players. Gesicki was TE 3 and on pace to possibly break 1000 receiving yards in the first half of the year. He averaged around 58 yards per game, even with a mix at quarterback with Tua and Jacoby Brissett. Some other positive notes were he finished 3rd in targets and air yards and 4th in receptions.

Nightmare struck in the second half of the season for Gesicki as he was TE26 the final nine weeks. His catch rate fell to 59% and averaged 31.4 yards per game. Even his TE partner Durham Smythe looked more efficient and scored ten fewer fantasy points in those final nine games. This drop in production could have come from the offense throwing 100 fewer attempts than they did in the first half of the season. It could have been the coaching staff’s decision as they only averaged 23 points per game during Miami’s impressive win streak and relied heavily on their defense to win. In a recent social media post following head coach Brian Flores firing, Geiski did not hold back his excitement about it.

There is still a chance that Gesicki can reach that level we hope for. It wasn’t until 27 that Travis Kelce put up his first 1000 yard season. Gesicki will be 27 and could be back with Miami or in a situation that uses him to his full potential. Gesicki should be viewed like Tua as a hold but could be a buy-low if someone is down on him.

Thank you all for reading my article. Come back next time as I dive into the New York Jets’ most important questions, and don’t forget to check out all of Dynasty Nerds unique articles.