The Broncos fell short of expectations in 2021. What does 2022 have in store? 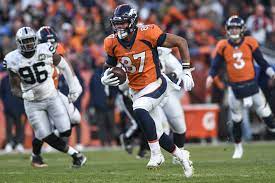 Noah Fant was an exciting tight-end prospect coming out in 2019 as he was one of two tight ends selected in the first round. Fant has been consistently productive for a young tight end three years into the league. While it is usually supposed to take time for tight ends to develop, Fant seems to be there, but will he ever be considered an elite tight end.

Over the last two seasons now, Fant has averaged 90 targets, 60 receptions for 600 yards, and three touchdowns. In 2021, he produced seven TE 1 performances with a very crowded pass-catching core. Fant ranked tenth in targets and yards after the catch while being eighth in receptions. One impressive stat was being ranked first in target separation, showing Fant’s passing-game ability. Fant ended the season ranked twelfth in fantasy points per game which shows his lack of elite production for fantasy.

I don’t personally believe it’s Fants’ ability holding him back from that next level. For one, he has dealt with the quarterback play of Drew Lock and Teddy Bridgewater over the last three seasons. A recipe like that does not bold well for quality targets, especially from Lock. Let’s not forget that the Broncos have three solid receivers who all received over 50 targets and could really be a 100 target receiver. The addition of Albert O two years ago affects Fants’ playing time. Albert O was indeed brought in as a guy to help develop Drew Lock, but it took targets away from Fant.

Fant still could have that potential in his game, but the offense would likely need to change first. The Broncos have five to six potential receivers who could see 50 plus targets in the offense without counting the running backs. You would likely need a few of them to leave the offense for Fant to see elite targets share. If not, the possibility of the passing game getting a new quarterback is likely. The Broncos have been rumored to acquire an elite quarterback this offseason to help Fant. The time to buy Fant below his value before the offseason begins.

Is the Javonte Williams breakout coming?

Outside of the quarterback concerns, every fantasy owner who owns Javonte Williams wants to know if he will be the next running back star. Williams, a former 2nd round pick in the 2021 draft, showed us why he could be a fantasy star for the future. As we head into 2022, does William take that next step in a big breakout season?

Williams has the talent to break out in 2022, as we saw the flashes of his potential. In 2021, Williams split time with Melvin Gordon but produced over 1200 all-purpose yards and seven touchdowns. He ended up finishing the season as RB 17 in fantasy. When Melvin Gordon did not play, Williams exploded with almost 200 all-purpose yards and a touchdown in one start. He almost saw nine targets in that game which showed upside as a receiver in which he was successful on those plays.

To add, in the second half of the season, he was RB 11, as he was able to find the endzone more often. Gordon was game-planned in the red zone, and goal-line work too often kept Williams from seeing more fantasy points. Williams managed to have 36 red zone opportunities, but Gordon had 46 on the season. When Williams was moving the ball well, he always seemed to be taken out for Gordon once the Broncos got inside the 20.

When given a more significant full-time workload, Williams presents elite traits that could shoot him to the top of the elite running back in dynasty. There is still the issue if the Broncos bring back Melvin Gordon or another running back, but Denver has already mentioned that Williams will be the lead guy. If an elite quarterback does join the team, that should only benefit the running back from seeing more stacked boxes. Williams will be a breakout player, barring any significant additions to the backfield.

The Broncos have a good receiver problem with Courtland Sutton, Jerry Jeudy, and Tim Patrick seeing a healthy share of targets. Even youngster KJ Hamler has plenty of talent and speed that unfortunately missed the last two seasons due to injuries. The current quarterback situation does not favor the passing game and has hurt the receivers’ stock. While the Broncos try to figure out their quarterback situation, who is the best bargain for the upside?

Let’s start with the player with the most targets with the team so far, Courtland Sutton. Sutton was a second-rounder pick in the 2018 draft who has a prototypical WR 1 build to his game. He had his breakout season in 2019, where he had 1112 yards and six touchdowns; it looked like a star was born in Denver. Unfortunately, Sutton tore his ACL early in 2020, which forced him out the rest of the season. In 2021, Sutton was looking to rebound, which he started decently as WR 17 through the first seven weeks. Those first seven weeks were without Jeudy, and Sutton put up 538 yards and two touchdowns while averaging eight targets per game. After Jeudy’s return, Sutton fell off the tracks hard as he was WR 89 the rest of the season. He couldn’t even get 100 receiving in any of the final three months while averaging only four targets per game.

Next is the one who worked himself up over the years in Tim Patrick. He had a more formidable challenge being undrafted in the 2017 draft. He eventually worked his way up and found a spot with the Broncos in 2018. In 2020, he finally got an extended opportunity with injuries piling up in Denver and since then has produced back-to-back 700 yards and five touchdown seasons. His success earned him a three-year 18 million dollar extension during the season. In 2021, he was on pace for a career season since he had 500 yards and four touchdowns during the first half of the season. When Jeudy returned, it decreased Patrick’s production, where he only had 225 yards and one touchdown in the final seven games.

Finally, Jerry Jeudy is the former 15th overall pick in the 2020 draft. Jerry Jeudy hasn’t had the career we thought he would. Jeudy had a very inefficient season in his rookie season, but there was hope for significant improvements heading into 2021. In 2021, Jeudy, unfortunately, missed time early then would eventually come back in the second half of the season. While Jeudy had an excellent first game, when he returned from injury, He finished the season as WR.61 and did not produce a single game over ten fantasy points. He will only be 23 years old by the start of the season, so there is hope for the young player.

The best way to value these receivers is to go after the one who presents the lowest value to buy but offers the highest possible ceiling to his game. It’s not Patrick since he projects more of a WR 3 in fantasy but a great depth piece. Jeudy could present the high ceiling as he was a former 15 top pick, but he still comes at a reasonable price since owners might have given up on the young receiver. The winner has to be Courtland Sutton in terms of value and ceiling. We’ve already seen Sutton produce at the highest NFL level, and if he can acquire a top-tier quarterback, he could gain that 2019 form.