@CoachStevenP examines the three biggest questions facing the Las Vegas Raiders 2022 fantasy season. Find out what we can expect from them! 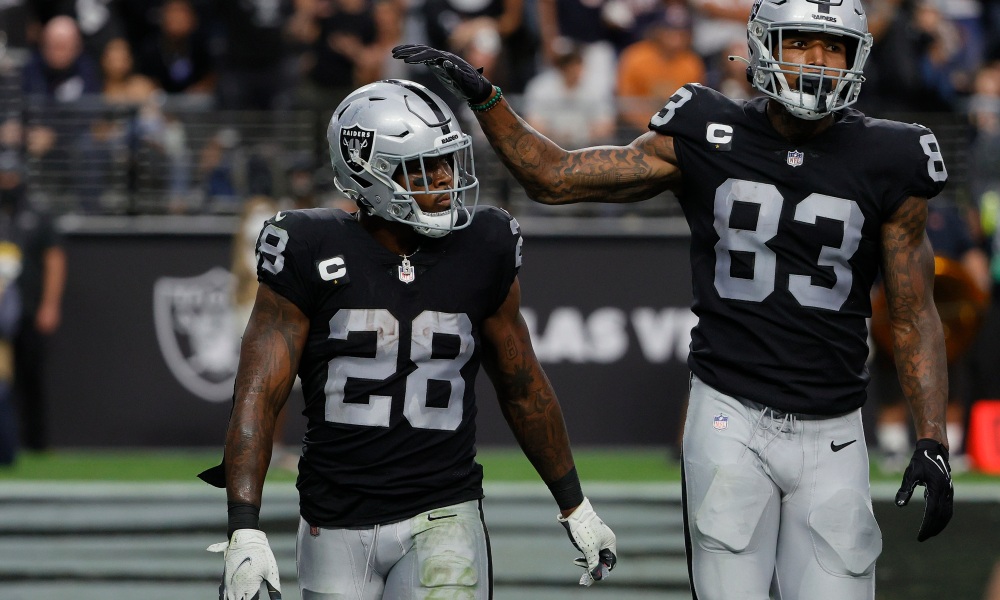 Las Vegas Raiders RB Josh Jacobs has been in the league for three years now. It seems like the verdict on him is still undecided.

The former first-round pick has had his ups and downs during this time with the Raiders. Now, the Raiders’ offense will go through some changes under new head coach Josh McDaniels. He’ll look to improve the offense that ranked middle of the pack in 2021.

Each new rookie class of running backs shines bright as older classes fade. Unless you perform at an elite level, fantasy owners overlook some players. Is the recently turned 24-year-old Josh Jacobs being underrated in fantasy?

One of the most significant issues with Jacobs was the drop in his yards per carry. It dropped from 4.8 to 3.9 on 31 more carries. Much of that could be attributed to the Raiders’ massive overhaul of the offensive line the offseason before.

In 2021, everyone was down on Jacobs because of the poor 2020 season and the addition of RB Kenyan Drake, who signed for two years that included $11 million guaranteed.

Jacobs’ production with Drake on the field led him to become the 22nd ranked running back in fantasy in the first 12 games before Drake suffered an injury. Jacobs was limited on his carries, seeing no more than 16, and averaged just three targets per game.

Once Drake went down, Jacobs’ value skyrocketed. Jacobs was the RB7 with three games over 20 carries in the season’s final seven games. He also saw an uptick in the passing game as he averaged five targets a game.

Jacobs ended the season with over 60 targets, an achievement that many didn’t think was possible. He was top ten in targets and receptions on the season for running backs.

Yet, Jacobs is still undervalued as a solid RB2 in dynasty leagues since he’s still young and should be the lead runner for a good offense.

A couple of factors are pending, like Drake’s return and whether or not McDaniels follows the backfield approach the Patriots have in recent years, which would be concerning. Jacobs should still see the majority of the workload while seeing a slight reduction in targets at worst.

I’d give up a late first in exchange for Jacobs to fill any RB2 spot as a contender.

Are we buying Hunter Renfrow as a top 15 WR?

Have you ever looked at Raiders WR Hunter Renfrow and thought he’s an NFL receiver who would finish as a WR 1 in fantasy football? Renfrow was a fifth-round pick in the 2019 NFL Draft from Clemson. Many had him projected as a slot receiver.

He was a solid contributor, averaging 625 yards and three touchdowns over his first two seasons in the league. Renfrow figured to be an excellent slot receiver with some decent PPR value at the receiver position for fantasy.

In 2021, Renfrow took a massive leap but did that pencil him as a top 15 receiver moving forward?

There’s a Reason for Everything: Explaining Renfrow’s Finish

In 2021, Renfrow finished with over 1,000 receiving yards and was a top 12 fantasy wide receiver. However, his finish to the season doesn’t tell the whole story of how he got to where he was.

In the first seven games, before the Raider’s bye week, Renfrow was the WR30, which made plenty of sense over the last two years for his value. Renfrow saw an excellent target share of about seven targets per game, but the yards and touchdowns weren’t falling his way.

If you take that first six-game pace, he would’ve had about 969 yards and five touchdowns which would have put him at that high-end WR 3 value.

That’s what you saw in the second half of the season, as he had 639 yards and seven touchdowns over the season’s final nine games. He was the WR7 during that time, but there were factors to go with that. WR Henry Ruggs’ abysmal legal situation occurred right before the bye, and TE Darren Waller would miss five of the season’s final six games.

In the six games (weeks 12 to 17) without Waller and Ruggs, Renfrow put up 500 yards and three touchdowns. That pace would have gotten him over 1,400 yards and eight touchdowns throughout the season.

I can’t get behind the idea that Renfrow will be a strong-end high WR2 in fantasy moving forward. A low-end WR2/high-end WR3 is the correct value for him.

McDaniels is a positive addition for Renfrow as his time with the Patriots has produced great slot receivers over his time there. The return of a healthy Waller and a likely significant acquisition in the passing game could refocus Renfrow.

He’s an excellent sell-high option now, but if the Raiders were not to add an elite receiver, that would change my mindset.

Can Derek Carr show us more?

The Raiders continue to commit to QB Derek Carr as their franchise guy. He has helped them to just two playoff appearances in eight years and only played in one playoff game.

In fantasy, Carr has yet to get over the hump to the elite level he showed during this MVP-like season. Carr will now be on his fourth head coach and still shows inconsistency in fantasy production.

At times, Carr looks like a star, but he performs worse than that for long stretches of games. Does Carr have another level to his game we haven’t seen yet?

In 2016, Carr was on his way to an MVP-like season, leading the Raiders to a 12-3 start. In fantasy, he was the QB9 through 15 games with 3,900 passing yards and a 28-6 touchdown to interception ratio. Carr finished outside the top 15 fantasy quarterbacks for the next three years.

In the last two seasons, he just missed the QB1 status at QB13 overall. Carr will be McDaniels best quarterback he’s coached since losing QB Tom Brady three years ago.

McDaniels needs to fix Carr’s inconsistent play for them to have any real success.

The Season That Never Was

Let’s look at the 2021 season because that was an easy climb but a quick downhill turn. Carr played well in the first seven weeks as he was the QB11 during that stretch.

In that second half or after the bye week, Carr took a turn to mediocre. While he somehow finished from week nine on as the QB14, his play on a per-game basis was poor.

Carr was only able to provide two games over 15 fantasy points. He even threw nine pics in those final ten games of the season.

Carr has been able to stay healthy over the last five seasons, which is a plus for fantasy. He always seems to be at that borderline QB1 potential but hasn’t put it all together. Carr could be a fantastic option for fantasy if the Raiders can make a big-time splash at the receiver position.

That core of players would likely be the best of his career to date. Carr’s talent shows enough to buy low on him now because the possibility is still there to have that QB1 season in future years.

I wouldn’t say it’s high, but there is a chance, and if not, you have a consistent QB 2 for Superflex leagues or as a backup.