@CoachStevenP continues his breakdown of dynasty prospects with the Los Angeles Chargers. 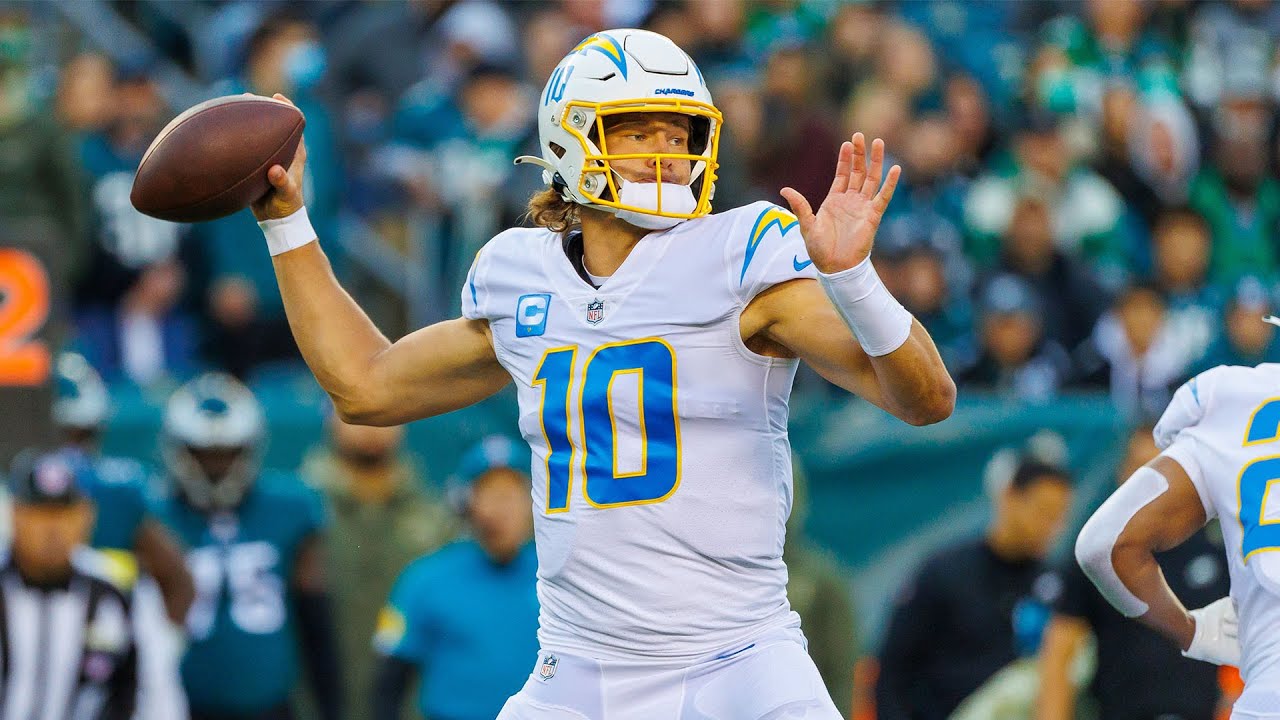 Is Herbert now in the top 3 discussion?

Absolutely, Justin Herbert is in that discussion. Herbert has dominated the fantasy world over his first two seasons in the league. Herbert has finished QB9 and QB2, respectively, something many quarterbacks can’t say they have. Should we be considering him in the same tiers as Josh Allen and Patrick Mahomes?

Since coming into the league, Herbert has produced 9,300 yards, 69 touchdowns, and 536 rushing yards. Those numbers are on par with Mahomes first two full seasons in the league. In 2021, he was second in targets, red-zone targets, and passing yards. While the Chargers continue to miss the playoffs, Herbert grew as a quarterback with five fourth-quarter comebacks this past season.

In Fantasy, Herbert improved as his season went, especially in the final eight games. He produced eight straight QB1 performances. He has had 23 QB1 performances over his first two seasons. The young quarterback even has a rushing floor that is underrated in his fantasy game. If you wish to call yourself a top-five dynasty quarterback, you need to have some rushing ability to your game. Herbert showed us this year that he can, if need be, by his week 11 games when he had nine rushes for 90 yards.

There are traits that Herbert needs to improve on moving forward. He was ninth in danger plays and eleventh in interceptable balls. His fantasy production came with his team’s success. In wins, Herbert had a 25/3 touchdown to interception ratio while a 13/12 when they lost. We need him to take care of the ball more to avoid any inconsistency in fantasy.

Hebert should be in the same tier as the fantasy elite; he has proven to be a special player. It helps that he has a fantastic cast surrounding him that should continue to help. Herbert has been gifted with a tremendous cast around him since his rookie season. Mike Williams and Jared Cook could be gone; let’s hope the Chargers can continue to build around him. If you wish to obtain Herbert, he should be an expensive pay-up asset.

Was Mike Williams breakdout for real?

Mike Williams enjoyed a breakout season after years of inconsistency. Williams was drafted with the 7th overall pick in the 2017 NFL Draft out of Clemson. Fantasy experts were always high on the talent, but fantasy owners have been frustrated with his lack of consistency, but was the breakout real?

In 2018 & 2019, Williams couldn’t seem to put it all together for us in fantasy. In 2018, he would have a ten touchdown season but only 600 receiving yards. In 2019, He would have his first 1000 yard season but finish with only two touchdown passes. In 2020, he put together a more balanced season with 756 yards and five touchdowns but still didn’t live up to the value of his draft capital. Williams needed to have a big 2021 as his contract was ending.

In 2021, everything just clicked for Williams in fantasy. In the first six weeks of the fantasy season, Williams was WR3 with six touchdowns in that stretch. He also dominated targets with an average of nine per game and made big fourth-quarter touchdowns. It was an understatement on how good Williams played with four of those six games with 18 plus fantasy points. He dominated the red zone, ranking 8th in red-zone targets, and even was in the top 12 yards.

Unfortunately, that inconsistency reappeared in Williams’ game as he would finish the year after the week seven bye as WR30. He would only have one game over 18 fantasy points while only scoring twice the final 12 games. Even his targets per game dropped from nine to just five during that time. In the article by the Chargerswire in November of 2021, head coach Brandon Staley said, “Williams had been dealing with some swelling in his knee from earlier this season. The swelling is a “non-factor”; it still could be holding him back.” Williams has dealt with a similar knee injury earlier in his career.

Personally, it’s still up in the air on his career moving forward. I’d lean slightly towards him reaching his peak in the 2021 season. The health factor is there as we’ve seen Williams miss time over his career and continue to deal with a similar knee issue which isn’t good for longevity. His landing spot this offseason could also change his status moving forward. His best situation is to go back and land with the Chargers to give him that mid-range WR 2 status. If he moves on, that could hurt his value since he could see a downgrade at the quarterback talent. At 27 years old, he is best as a sell high.

Austin Ekeler showed hard work could pay off as he was an undrafted player from the 2017 draft. Early on, Ekeler was used as a receiving back and had over 80 targets in just his first two seasons. Fast Forward to today, Ekeler is in the conversation as a top-five dynasty running back. He shows us that you don’t have to be a 300 carry running back to be elite anymore. Is Ekeler now in that elite grouping?

Austin Ekeler, over the last three seasons, has been targeted a total of 267 times now. His elite ability in the passing game makes him so dangerous as he has gained at least 400 receiving yards each of the last four years. While he isn’t a traditional running back, Ekeker was able to see a career-high 206 carries. Ekeler was very efficient with his workload as he has averaged over 4.0 yards per carry each season.

One concern that fantasy owners had before the season was with his red-zone usage since he didn’t see that opportunity of an RB1. He made a significant jump in red zone opportunities from 22 in 2020 to 61 in 2021. He ranked second in red-zone touches among running backs. Ekeler has turned into a dangerous weapon that a young quarterback in Justin Herbert uses often.

Ekeler is a top-five running back in dynasty right now. He controls most of the carries, and I can’t see them bringing in anyone to damage that workload. He is still a running back over the next few seasons that will likely command upward of 70 targets in the offense. The Chargers have a top 10 unit on the offensive line, and with Herbert threatening the passing game, Ekeler will thrive in the offense. As a contending team, I’m buying up Ekeler to provide solid RB1 fantasy numbers.