Steven Pintado rewinds the season to take a look at the New England Patriots offense. 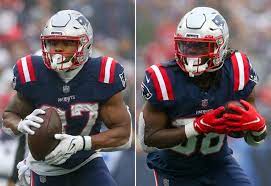 What to Make of the Patriots TEs

What happens when you give $87 million to two tight ends? Well, you get 894 yards and ten touchdowns between the two of them. The world was shocked that the Patriots decided to return to their old roots and scheme two TEs as their primary offensive weapons. I don’t think many fantasy experts would have had Hunter Henry almost tripling Jonnu Smith in fantasy points this season. As potential franchise quarterback Mac Jones grows in the offense, is there enough room for them both to be fantasy relevant?

Henry was a major surprise for fantasy owners after projecting him to be the 1B in this offense to Smith. Henry is drastically overlooked as he has posted three straight 600 yard seasons now. While he has dealt with injuries throughout his career, he hasn’t posted fewer than four touchdowns in any season. This season we saw a tale of two Henrys as in the first ten weeks, we saw him as TE3 and pure dominance in the red zone. It showed on the rankings as he was seventh in red-zone targets and second in touchdowns and fantasy points per game.

Following Week 10, Henry ended up as TE18 the rest of the season. Most of it was because he only scored two touchdowns those final seven weeks. The Patriots also threw the ball six fewer attempts per game and started grounding and pounding late in the season. Henry fits the offense scheme better with his playstyle and frame in the red zone. Realistically, we saw somewhat of a ceiling season for him, so selling high on Henry makes good sense if they find a way to get Smith more involved. Suppose you try packaging him to get injury-plagued players like Darren Waller or TJ Hockenson. He may end up being a hold as owners primarily don’t view him in that TE 1.

In the running for the worst fantasy signing of 2021 is Smith’s four-year, $50 million contract. He had his worst fantasy season since his rookie year in the league. He started his first four games averaging five targets per game and seemed like he was in for a career season. Unfortunately, from weeks 6 to 17, he averaged about two targets per game and only produced two games over five fantasy points. He was dealing with a hamstring injury throughout the season, leading to poor production and reduced snap counts. If you watched some of the games, it just looked like he didn’t fit in the offense, like he was with the Titans.

It’s tough to state an excellent argument for Smith since, in five seasons, he never produced over 500 receiving yards. Smith has been unable to be a consistent touchdown threat as he has only one season over three touchdowns. His athletic talent is elite and gives hope that he could still have a breakout career. Most of Smith’s potential is now linked to Jones and his ability as a passer. We already saw that Jones is somewhat capable of throwing. The offense needs to get Smith more involved, especially in his route running. He only ran routes on 28% of plays, as his partner Henry ran routes 71% of the time. Jonnu Smith is at an all-time low that I’ve seen folks cut him from dynasty teams and could be a good buy-low option for TE needy teams.

Is Mac Jones is a Fantasy QB to Trust?

So does the rookie quarterback who finished QB17 have a bright future in the fantasy world? I think the verdict is still out there on him. Jones looked like a quarterback you surround with talent rather than helps uplift the offense. He did improve as the season went on, as he had four QB1 performances in his last seven games of the season. He jumped from QB21 in the first half to QB 16 in the second half. The most significant part of that was that Jones put together more games with higher yardage and two-plus TDs. His first half was more inconsistent as it was either or early on.

Jones was able to show us flashes of reliable fantasy performances, especially when the Patriots were winning football games. Stats from pro football reference showed below:

You saw the tale of two Jones, one while winning who took care of the ball and accurately hit his targets better. The other was inaccurate and created turnovers for himself. The biggest takeaway is neither looked like a fantasy player. During wins, Jones averaged 204 yards and 1.3 touchdowns per game. He didn’t do much better during a loss while averaging 250 yards and 1.2 touchdowns per game, but having a 1.4 Int per game did not help the cause. Don’t get me started on a road game where Jones averaged under 200 passing yards and a 6/6 touchdown to interception ratio in eight games.

Jones’s completion percentage was noticed as he was second in pressured completions and seventh in red zone completions. Jones was strong in the short game coming out of college, so the red zone makes sense. My biggest issue with Jones is his deep ball game was shaky coming into the league. I didn’t personally believe he had enough arm strength to make those throws consistently. In the 17 game fantasy season, he ranked 25th in deep-ball accuracy on 62 deep ball attempts.

Jones is a sell in my eyes right now. Talk with them if fantasy owners are buying into the Patriots’ success under Jones. He could be sold off to get any other quarterback in his class who possesses more upside for the long-term future. Jones is the only quarterback without a strong rushing ability in his game. He might be good enough for the Patriots, but his upside doesn’t scream QB1 in his future.

What to Make of the Patriots RBs

The best way to describe the Patriots’ backfield is chaos with a ton of potential. Let’s start with Damien Harris, who just put up a career season on just 202 carries. Harris had five 100-yard games and banged in 15 rushing touchdowns. He was the lead A1 guy for most of the season, with 12 of his 15 games with double-digit carries. Harris finished eighth in yards, fifth in touchdowns, fourth in breakaway runs, and thirteenth in the red zone touches. It’s not wrong to say he made fantasy owners excited all season long as a solid RB2 in fantasy.

While Rhamondre Stevenson’s success got off to a bumpy start with multiple healthy scratches, he gained the trust back of the Patriots as the season went on. He showed flashes as a potential three-down running back when used in the passing game. In the one game he got the lead role, he showed his physical traits by putting up 100 rushing yards, two TDs, and even saw five targets in the receiving game. He was able to see fantasy success even with playing second fiddle to Harris with five performances of RB3 or better.

Harris and Stevenson look like they could be a great duo for the new look committee approach the NFL is adapting to. There are some concerns, and they are James White/Brandon Bolden. These two have been pass-catching backs for the last six seasons with the Patriots and used most in that fashion. White has had 60 plus targets each season with the Patriots. He has been trusted to be on the field during the most critical downs on the offense. Bolden got an opportunity with White going on IR early and thrived with 45 receptions and had over 600 all purposes yards this season. Both RBs are over 30 now and are pending free agents this offseason.

This backfield is delicate; if even one of White and Bolden return, it kills the value of all the running backs outside of an injury. You have to view this backfield similar to what we saw this season, where Harris is likely a low-end RB2 with little receiving value. Stevenson would be a boom/bust RB3 depending on this usage each week, and whoever comes back would see PPR RB 3 potential.

If neither one returns and the Patriots decide to make this a true duo, then the sky’s the limit for these backs. Harris and Stevenson could both end up being solid RB2 with their potential on the ground. Stevenson would likely see the passing work more often since, in just one year, Stevenson had seen more three-plus receptions games than Harris has had in his three seasons now. I think both running backs are sell highs if you can. Fantasy owners understand that you don’t want to touch the Patriots backfield. If you can use them to package for less complicated backfields, then pull that trigger if you can.