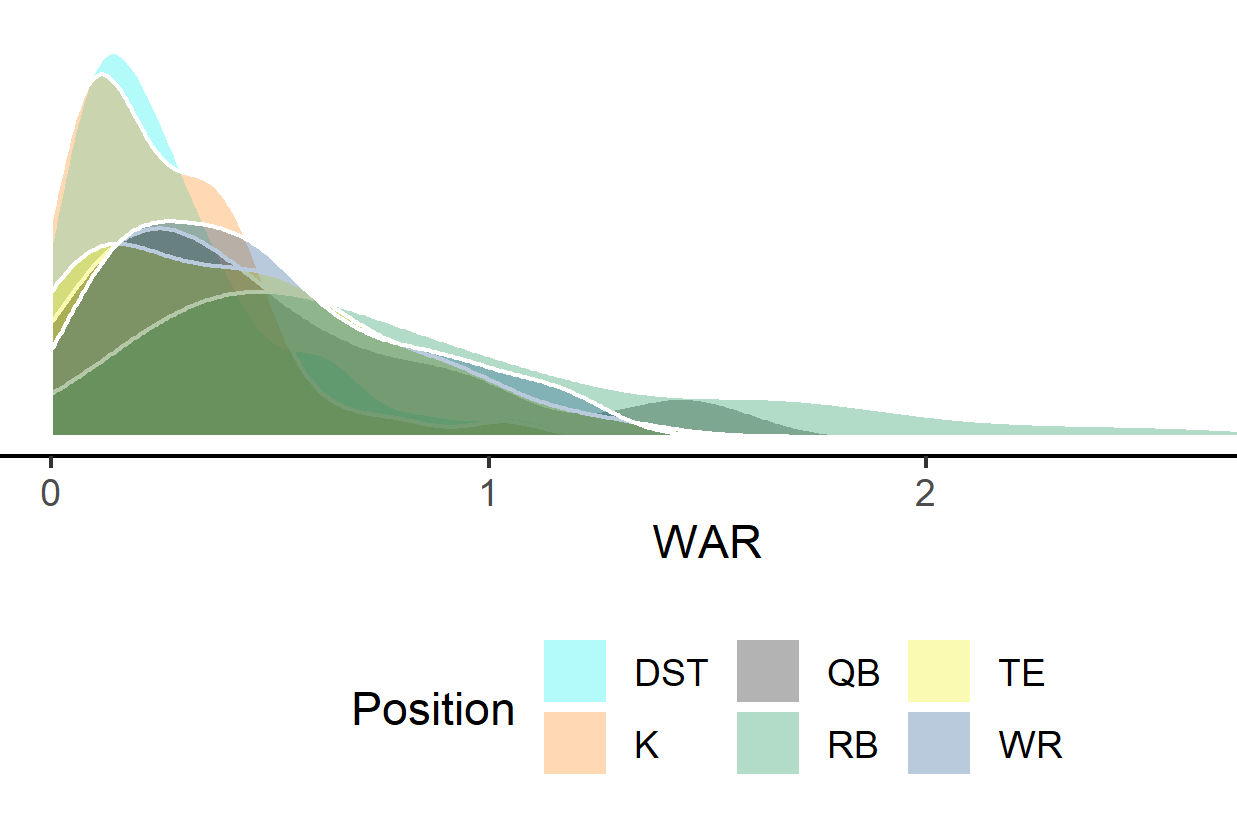 In Part 1 of this series, the inner workings of a new metric – fantasy football wins above replacement – was explained to provide dynasty owners the ability to compare cross-positional players and evaluate the real worth of any individual player. This is all great and well, but lacks any predictive value to put forth for the following year. In this edition, we’ll forget about any individual player and focus on prediction at the position-level. In doing so we can answer the following questions:

To answer these questions, I used the last five years of data (2015-2019) to base a robust model determining WAR for each position (as opposed to using a single year). This gives a presumably more accurate idea of what to expect as this controls for any abnormally high or low performance from the position-level. For example, in 2019, top-ADP wide receivers struggled more than usual, but all five years together regresses the result towards the true mean.

Below is a WAR comparison between the two positions most believe to be the most important in fantasy football – RB and WR:

This density graph illustrates the prevalence of players in each position and how many provide x number of WAR. Think of it like a smoothed out histogram. For example, there are a lot more WRs between 0 and .5 WAR than RBs revealed by the blue WR arc stretching higher on the y-axis than the green RB arc. The higher the amount of players, the higher the arc on the y-axis.

The flatter, stretched out green RB arc tells us there are less players at each point on the x-axis making those at the high-end of this distribution (1.5 WAR and greater) much more valuable. You might have figured the RB position is the most valuable in fantasy – but this graph shows the degree of magnitude.

Despite this, many fantasy drafters often opt to take the “safe” WR early to avoid potential RB landmines. Hogwash. The idea that your team could be gutted is true, but the logic misses the mark entirely. Fantasy football isn’t retirement investing. You don’t want to buy government bonds looking for slightly better than average returns. In fantasy terms, that’ll get you a ticket to the playoffs and a first-round loss. You want to win the league. I don’t care if it’s seasonal or dynasty. The best way to do this is to go big. And the only way to do that is to take a chance on RBs. You can’t be afraid of the land mines.

Let’s pair up the WAR results for the next two most important positions in fantasy football – QB and TE:

The distinction between distributions is minimal compared to that of RB and WR. Typically, experts recommend waiting in drafts to select a replacement-level QB while stockpiling at other positions. The chart above tends to support this assessment as the leftmost QB hump peaks slightly above the TEs. But consider this caveat – sometimes it pays to pick the first and presumably best QB as indicated by the right-most QB arc separating itself from right-most TE arc. In the last five years, here are the six QB’s included in this peak providing 1 WAR or higher:

None of this makes picking the exact QB to be next +1 WAR provider any easier. The issue with going big on QB is that many of these guys listed above were not household fantasy options prior to earning fantasy owners +1 WAR (ex: Watson, Mahomes, Jackson). But at least you have an idea of what the upper-bound ceiling is going to be if you hit your mark. That’s the quantitative value WAR has to offer. Are you convinced Mahomes is going to return to 2018 form after fully recovering from last year’s injury? Is Lamar Jackson’s style of play regression proof? Go out there and plant your stake by drafting your guy aggressively in your inaugural draft. Otherwise, heed conventional wisdom and pick a back-end starter later in the later rounds.

Oh yeah. We still have two more positions. The afterthoughts – DST and K:

WAR really corroborates conventional wisdom here. Both positions struggled to even get one representative over the 1 WAR mark while a majority of the seasonal performances clustered together near the replacement-level. This again indicates it’s less important to put a priority in drafting either of these positions because it’s not likely you’ll be getting performances much better than the back-end starters. And if you thought picking a reliable QB was hard, don’t even think about picking right on the cream-of-the-crop in either of these.

Now that we mapped each position’s WAR demographics in pairs, let’s put them all together and shed light on the three questions we set out to answer:

What value would the top-tier players at each position bring my fantasy team?

The chart does a great job in representing this answer. RB dominates the right-most proportion of this graph indicating that top WAR performers are going to give you about 2+ WAR. Aside from 2015, each year since has provided at least one RB meeting this mark:

QB is the position with the next highest top-end distribution, which may catch conventional fantasy theorists off guard. WR is next and if we isolate just the two distributions we can see that, quite frankly, WR barely differentiates itself from TE:

All in all, there’s just no competition at the top-end of the distributions to RB.

What value would replacement-level players at each position bring my fantasy team?

Now let’s focus on the left-side of the chart. The higher the left-most peak, the more replaceable that position is. You’ll notice DST and K provide the most replace-ability which should surprise no one. What might be surprising to find is the WR being next up in this respect – edging out TE and QB. Finally, the RB position proves to not only be the most important at the top-end of the distribution, but also the least replaceable at the bottom.

What positions should be prioritized for a dynasty (or seasonal) fantasy draft?

At the end of the day, this is the most important question and by now the answer should be more than obvious. Even in a .5 PPR format designed to make WR more comparable to RB, there is no competition here whatsoever. RB is king with no real competition. As a matter of fact, here’s a hot take to conclude from the insights WAR provides:

WR is drastically overrated in fantasy football and I’m here to proclaim this and thrive on that hill.

You should never think about drafting a WR in the first round. OK, MAYBE Michael Thomas. But check this out: if we slice the data to only include players providing +1 WAR in the past five years of .5 PPR, here’s how the breakdown by position results looks:

The fact that almost as many QBs provided +1 WAR as WR is startling especially given the fact that there are many more WR’s than QBs in their respective pools.

But as argued above, picking a top QB might be harder to do compared to other positions. But given the robust value of a replacement-level WR, I’d recommend keeping the TE position in mind as second priority to stockpiling RBs. The “big three” (Kelce, Ertz, Kittle) all finished in the top five in WAR last year with Kelce and Kittle the top two. These two studs each gave fantasy teams about a full win above replacement for the year and should be highly considered in the mix with RBs.

OK, so to sum up, generally speaking, WAR research would indicate that the top priority in fantasy drafting should be to stockpile RB with possible exceptions for taking a top-TE or top-QB given how confident you are feeling on a particular player. But in dynasty, player tenure is a key factor to account for as well and the lifespan of an NFL RB is much shorter than any other position no matter how successful. But for 2020, none of this really matters because the age of top-RBs is insanely young:

This list doesn’t even account for the younger rookie RBs and still averages to a spry 24.5 years old. Any of these guys can conceivably be worthy of the overall fantasy #1, and, aside from Mark Ingram, all have four-plus years left in the tank (which is about as far as you could project any other position anyway).

Remember, I’m not here to say exactly who any of the individual names at the top of these positional distributions are going to be. That’s your job. And that’s the fun of fantasy football. But using WAR can help set the market for how the top and bottom ends of each position should be valued.

Think of WAR as a historical almanac. WAR can’t show you who the best players at each position are going to end up being, but it can show you what their ceiling is likely going to be. It can also show you what to expect out of each position’s replacement-level players. Use this information to get off on the right foot with your dynasty league and put your team in a position to compete on a continual basis.

The final installment of this series will address trade ramifications with WAR. Find out how individual players in 2019 matched up with those in other positions and how you could use the lessons we’ve learned so far to make league winning trades.