Five Candidates to Be This Year’s Kenny Pickett

Which quarterback prospect will take their draft stock to new heights this fall? @FF_Hulsey gives you five candidates to be this year’s Kenny Pickett. 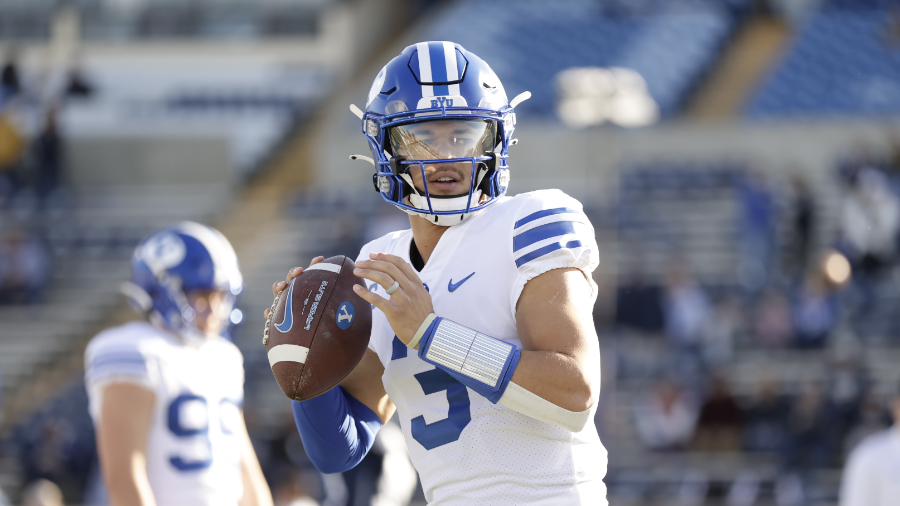 Joe Burrow in 2020, Zach Wilson in 2021, and Kenny Pickett in 2022. Seemingly every year, we watch a relatively unknown quarterback prospect put together a highly efficient season and take their draft stock to new heights. Pickett put together a tremendous senior campaign for Pittsburgh and became a first-round draft selection, almost entirely out of the blue. Across the industry, writers and analysts are now racing to uncover and crown the next diamond in the rough before the college football season kicks off in less than two months. This is why many casual fans scratch their heads when reading 2023 mock drafts and wonder, “who the hell is Tanner McKee?”

It is a near certainty that someone, or multiple players, will emerge as top quarterback prospects after being mere afterthoughts. The hard part is identifying those players and getting a jump on your league mates. Here are five candidates to be this year’s Kenny Pickett.

Leary took an unconventional path to success. A rollercoaster collegiate career followed his rockstar status as a high school recruit. He re-wrote record books as one of the best high school players in New Jersey history. In April 2017, Leary committed to NC State as a consensus top 20 quarterback in the 2018 recruiting class. His early college career was marred with setbacks, though. A bout with COVID-19 led to Leary losing his starting job in his sophomore season. He won the job back only to suffer a season-ending injury in 2020.

Everything came together in his 2021 breakout season. Leary compiled a 3433-35-5 passing line and completed 65% of his pass attempts. He is the only college quarterback who threw 35+ touchdowns with less than six interceptions in 2021. Even more impressive, two of his five interceptions were on hail mary passes. I expect him to maintain his turnover-worthy play rate, which was the lowest in the ACC last season.

NC State lost a lot on offense, but they figure to be pass-heavy again this season with Leary and a deep receiving corps. I would love to see him take another step forward with his efficiency and continue to play well in big games. He fits the Pickett profile and might be the most overlooked quarterback prospect in college football as it stands now. In startup devy drafts, he often isn’t selected until rounds 8-10. There could be a massive return on your investment at that price. He projects as a significant riser at the position over the next several months.

Looking to follow an eerily similar path to that of Zach Wilson, Hall is the next Cougars quarterback with first-round upside. Hall, who played high school ball just an hour from Wilson’s high school in Utah, is coming off his first season as BYU’s starting quarterback. One season of film is all it took for some analysts to start the hype train. In fact, Matt Miller’s recent 2023 mock draft slotted Hall as a top 10 pick. Casual fans may not be familiar with Hall yet, but like Wilson, Hall will look to strap a rocket to his draft stock in his final season at BYU.

Hall’s first season as a starter in Provo did not disappoint. He led BYU to an 8-2 record while putting up a 2583-20-5 passing line and 307 yards on the ground. In 2022, I’m looking for him to make a fairly significant leap statistically. A 3200-yard season with 30+ touchdowns is within his range of outcomes. If that comes with good efficiency, we could see a season similar to Wilson’s junior campaign when he became a major riser.

I like what I see when watching Hall’s film. He skillfully manipulates defenses (see below) and delivers strikes down the field. Hall completes big throws with pressure in his face and shows off top tier placement. Being a dual threat is a central part of Hall’s profile. He’s not an elite athlete but maneuvers well in and out of the pocket. In addition to the impressive film study, I am sold on Hall as a leader with an “it” factor that goes beyond the box score. With that said, the profile doesn’t come without a few cons. After serving a mission, Hall arrived on campus at BYU in 2018, so his biggest knock is his age. He will be 25 years old during his rookie NFL season.

I get the sense that the NFL is much higher on Jurkovec than the devy community. This could create some exciting buy opportunities, especially before the season beings. Prospect fatigue and a myriad of injuries are to blame for managers growing frustrated over the past year. 2021 was a lost season for Jurkovec, starting with a freak hand injury and then returning at less than 100%. The production certainly hasn’t met the hype surrounding him after the former top recruit transferred to Boston College. However, the team is set up for success this fall, and the situation is ripe for a breakout season from Jurkovec and another 2023 prospect, Zay Flowers.

In 16 career games at Boston College, Jurkovec has a 59% completion rate while averaging eight yards per pass attempt. That efficiency has to improve, and I believe it will if he can stay on the field. The brief stretches of dominance need to stick around longer than what we have seen to this point. Jurkovec has the prototypical NFL frame, can move well in the pocket, process information quickly, and has the traits NFL teams need from their QB1. He is a confident guy and a true leader of the team. Boston College is a darkhorse team to win the ACC, but that will require their dynamic passer to be a healthy, consistent force all season. A 3500-25-10 season is possible, which would surely revive his draft stock and put him into Day 2 consideration at worst. Jurkovec has some Carson Wentz to his game.

It is easy to forget how highly ranked Rising was as a recruit in the 2018 class. Rising received offers from Alabama, Oklahoma, and Texas, among others, before eventually committing to the Longhorns. He was a consensus top 15 quarterback and top 300 overall player in his recruiting class. He threw 69 touchdowns in 25 games at Newbury Park High School (CA), so the pedigree is there. Rising transferred from Texas to Utah in January of 2019. It should be no surprise that he is performing at a high level in the suddenly QB-heavy Pac-12.

Rising flew under the radar in 2021 but garnered national attention in a shootout with Ohio State at the Rose Bowl. It was one of Rising’s best performances of the season, completing 17 of 22 passes for 214 yards, two touchdowns, and no turnovers against the Buckeyes. Utah established its offense under Rising’s leadership as one of the most efficient units in the country. Expectations are high for 2022, as Rising enters the season as a potential Heisman candidate with Utah looking to make a College Football Playoff run.

At the Manning Pass Academy last weekend, Rising made quite the impression. He competed against other top quarterbacks such as Bryce Young, Anthony Richardson, Will Levis, Spencer Rattler, and others. Rising was mentioned as a standout by many who attended the camp. Like Pickett, his mechanics are exceptional. The size is what you want from a pro prospect, although I question the team’s listed numbers a bit. He also moves quite well (499 yards, six rush TD), and we know the importance of a dual-threat quarterback for fantasy.

This is a guy who I have inadvertently scouted quite a bit due to my Treylon Burks film study. Think Great Value brand Cam Newton. Another former four-star recruit, Jefferson, has some pedigree and now enters his redshirt junior campaign with a few big SEC wins under his belt. Jefferson was highly efficient in 2021 and led the Razorbacks to a 9-4 season with wins against Texas, Texas A&M, LSU, and Penn State. His 2676-21-4 passing line was one of the best in the conference to go along with a team-leading 664 rushing yards.

Jefferson is a raw, toolsy prospect with a powerful frame. He does well out of structure and shows flashes of NFL traits. However, Jefferson needs to become a more polished passer and show that he can succeed without Treylon Burks as a security blanket. While he profiles as a Day 3 prospect at this point, there is a clear path to Jefferson becoming much more than that. There have been massive strides in his development as a passer already, and that will need to continue in 2022. His size and rushing ability make for a rare combination that will undoubtedly catch the league’s attention. The upside is evident. Whether Jefferson reaches his potential remains to be seen.

Gain access to the Prospect Film Room, members-only Discord, podcasts, Nerd Scores, full rankings, and more for just $4.99 a month. Check out my complete devy rankings immediately after signing up! Copy and paste promo code FF_Hulsey to take 15% off any membership cost today.