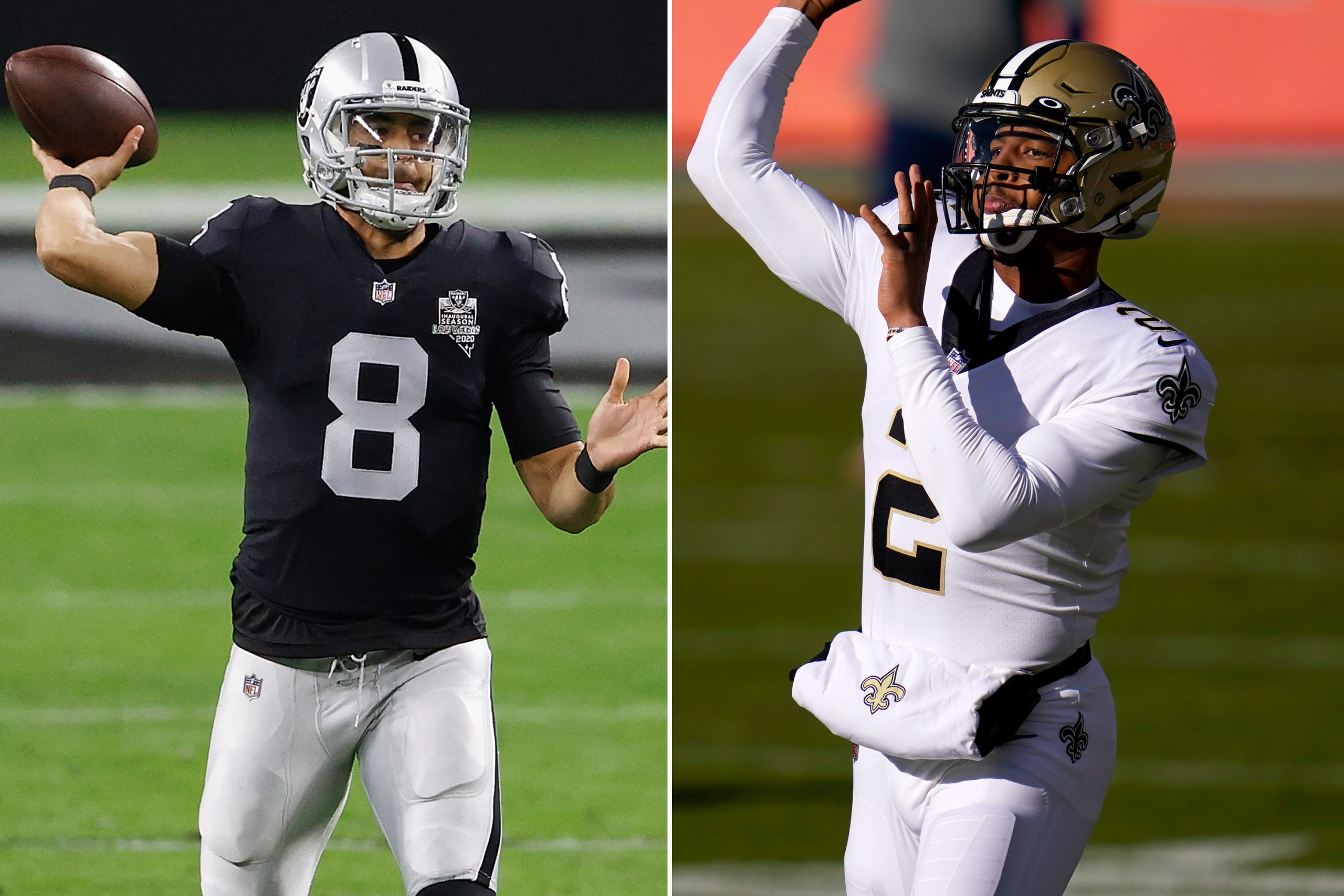 With that in mind, it can be nearly impossible to acquire a good quarterback for a reasonable price in Superflex leagues. However, if you look for value where others are not, you can find cheaper options that offer immense upside. Although elite quarterbacks remain few and far between, the tier of veteran fringe starters is deeper than ever. Trust me, as a Broncos fan, I see a new one under center every season.

Unsurprisingly, a slew of fringe starters will become free agents this offseason. The question is, which ones could find themselves starting in 2022 and thus, see a significant increase in value? The biggest variable in answering that question is the trade market, which boasts as many big names as ever. Aaron Rodgers, Russell Wilson, and Deshaun Watson– pending his legal situation, could all be available via trade. With each possessing a no-trade clause, their situations mirror free agency in many aspects.

For this exercise, however, we will stick to those that will specifically be free agents. Let’s look at the options and where they could land next season, in order of likelihood to start in 2022.

Winston tops the list, partially because there is a very realistic scenario in which he returns to New Orleans on another one-year contract. The former number one overall pick threw for 1,170 yards, 14 touchdowns, and three interceptions in seven games before suffering a torn ACL in Week 7.

Known as a gunslinger, the limited interceptions will likely speak to talent evaluators more than anything else Jameis did in his seven starts. That being said, we all know that Sean Payton put the training wheels on him.

In the three seasons in which Winston played in all 16 games, he finished no lower than QB16 and as high as QB3. Even with the training wheels on this season, he is QB13 in average points per game with 17.2.

It would be fun to see what Winston could do with D.J. Moore or Terry McLaurin, but the Giants are a sneaky landing spot that would be fascinating. They run deep with playmakers despite their offensive struggles and could use a QB willing to push the ball downfield. The Steelers, however, seem to be the best fit if he leaves New Orleans. Claypool truthers would be ecstatic, but the move could also benefit Diontae Johnson and Pat Freiermuth. Najee Harris has benefited from Roethlisberger’s inability to push the ball downfield, but a QB like Winston wouldn’t be bad for Harris either. If Mike Tomlin let him sling it around the yard again with the weapons in Pittsburgh, he would be a fringe fantasy QB1 again. If the Saints get Michael Thomas back and/or add talented pass catchers, they remain a strong option, but Winston wouldn’t be more than a QB2.

Prediction: Jameis Winston returns to the Saints on a short-term deal.

Another former number one overall selection, Trubisky isn’t rated this highly amongst the free agent QB class by most. Understandably so, but it is a little surprising to me. I have him second on the list and strongly considered him in the top spot, and it’s not just because I snagged him in many Superflex leagues in anticipation of his free agency.

In the two seasons in which Trubisky played 14 or more games, he cleared 3,000 yards in each. Combining the two seasons in 2018 and 2019, he played 29 games throwing for 6,361 yards, 41 touchdowns, and 22 interceptions while rushing for 421 yards and three scores, with a record of 19-10. Nobody will confuse him with Lamar Jackson, but Trubisky’s rushing is an underrated part of his game.

While these numbers aren’t eye-popping by any means, they are solid. And although his numbers weren’t as strong in his first and last seasons with the Bears, he still sports an overall record of 29-21 and a completion percentage of 64. These numbers are all far greater than Sam Darnold’s, a former second overall pick who got a second chance with a new team.

Trubisky was a pro bowler in 2018, his second year in the league when he finished as QB15 overall but QB11 in average points per game. Unfortunately, he finished in the QB20s in every other season, both overall and in a per game average. But if everybody loves to rip on Matt Nagy, why aren’t we blaming him for some of Trubisky’s struggles?

The question, obviously, with any of these landing spots is if he will be the starter or not. At a minimum, I envision Trubisky getting an opportunity to compete for a starting role, but he could start for a few of these teams today. Seattle is an interesting landing spot, pending a Russell Wilson trade, as Pete Carrol likes to rely on the running game. Perhaps they could maximize his rushing ability and run a ball-control offense.

I believe the Panthers have bigger aspirations at QB but could be a factor if they strike out on the big names. The Giants may not see him as an upgrade over Danny Dimes, but he could provide competition. To me, Denver makes a lot of sense if they are unable to acquire a big name, especially if they move on from Head Coach Vic Fangio and have an interest in bringing in Brian Daboll. Could Daboll and Trubisky team up in the Mile High City or elsewhere? Pittsburgh could be a fit, but they too will be attractive to the big-name QB’s who are looking for a trade.

The Washington Football Team may look to the draft to get their QB of the future, but Trubisky seems like a natural fit in the nation’s capital. He could be brought in as a bridge QB to compete with another passer or as the official starter. The Football Team will be desperate for a QB upgrade and a new face at the position for an impending rebrand.

Whether in Washington or elsewhere, Trubisky as a starter would be a QB 2/3, but his rushing upside and potential development as a passer make him an intriguing buy-in Superflex or two QB leagues.

Prediction: Mitchell Trubisky signs with the Football Team on a short-term deal.

Teddy “Two Gloves” Bridgewater has had a remarkable journey as an NFL QB. Following a pro bowl season in 2015, his second season in the NFL, Bridgewater suffered a severe injury prior to the 2016 season, which nearly cost him his leg. After a long road of rehabilitation, Bridgewater would attempt two passes for the Vikings in 2017 before finding his way to New Orleans in 2018.

After going 5-0 as an injury fill-in for Drew Brees in 2019, Bridgewater parlayed that success into another starting gig. While he could not find much fantasy success for himself with the Panthers in 2020, he supported three top 24 wide receivers, which is unheard of for a back-end QB2 averaging 16.1 points per game.

His 3,733 passing yards and 15 touchdowns were both career-high, but neither are particularly strong numbers in today’s NFL. Bridgewater found himself vying for a starting job with the Broncos after the Panthers moved on, and I fully expect Teddy to be in a similar spot again next season, with a new team.

Bridgewater’s inability to support the Broncos talented group of pass-catchers as viable fantasy options speaks for itself in terms of the fantasy football impact he brings. If he can’t find fantasy success with this group, it’s unlikely that he will anywhere else. He is most likely to serve as a bridge QB somewhere or potentially compete with a struggling incumbent starter.

Prediction: Teddy Bridgewater signs with the Texans on a two-year deal.

Selected second overall by the Tennessee Titans in the 2015 draft, Marcus Mariota went one spot behind Jameis Winston. Ironically, both players found themselves with a new team after their five-year run with the franchises that drafted them.

Mariota never truly found consistency with the Titans, sporting a record of just 29-32 as a starter before being unseated by Ryan Tannehill. In his best season with the club, Mariota threw for 3,426 yards and 26 touchdowns in 2016, adding in 349 rushing yards and two more scores on the ground. Outside of that season, which saw him finish as the season’s QB9, Mariota has been nothing more than a low-end QB2.

Despite his past struggles as a starter, Mariota remains an appealing fantasy QB for the rushing upside he provides. Especially as we see the league transition to support rushing QBs more than ever before, it’s possible that Mariota snags a starting role somewhere and is given more freedom as a runner than he’s ever seen.

As with any of the available QB’s, the Broncos and Steelers will be appealing as they offer the most offensive weaponry, but the Football Team would offer an intriguing landing spot. Head Coach Ron Rivera had a successful run with Cam Newton as his QB. Mariota is not as talented as Newton in his prime, but he does offer some of the same unique abilities. Even so, the Steelers boast a win now roster and a leader who will settle for no less than a win now option in Head Coach Mike Tomlin. The Steelers may very well land an elite QB in the trade market, but Mariota could be a target if not. Mariota would become an interesting QB2 if he were to don the black and yellow with all the talent surrounding the QB spot in Pittsburgh.

Prediction: Marcus Mariota signs with the Steelers on a short-term deal.

It’s unlikely that Fitzpatrick lands a starting job, especially as he will be coming off hip surgery. However, the 39-year-old QB remains worthy of a roster spot due to his gunslinger mentality and the possibility that he could be a bridge option for a team set to groom a rookie. Pittsburgh especially makes sense if they turn to the draft for their next franchise QB and miss out on the names above. Fitzpatrick in that offense would be fun to see.

Taylor is in a similar boat as Fitzpatrick, but after being outplayed by Davis Mills in Houston, he is more than likely destined to be a backup. The often-injured QB is more likely to provide mentorship to a young QB than he is to make an impact on your fantasy football team.

Dalton will be vying with Fitzpatrick and Taylor for backup QB jobs and could even return to Chicago to remain Justin Field’s backup. Chances are that you’ve already rostered Dalton at least once in your fantasy football lifetime, no need to go back down that road.