Gabriel Davis had a 50 point playoff performance against the Chiefs. Should this change his actual fantasy value? 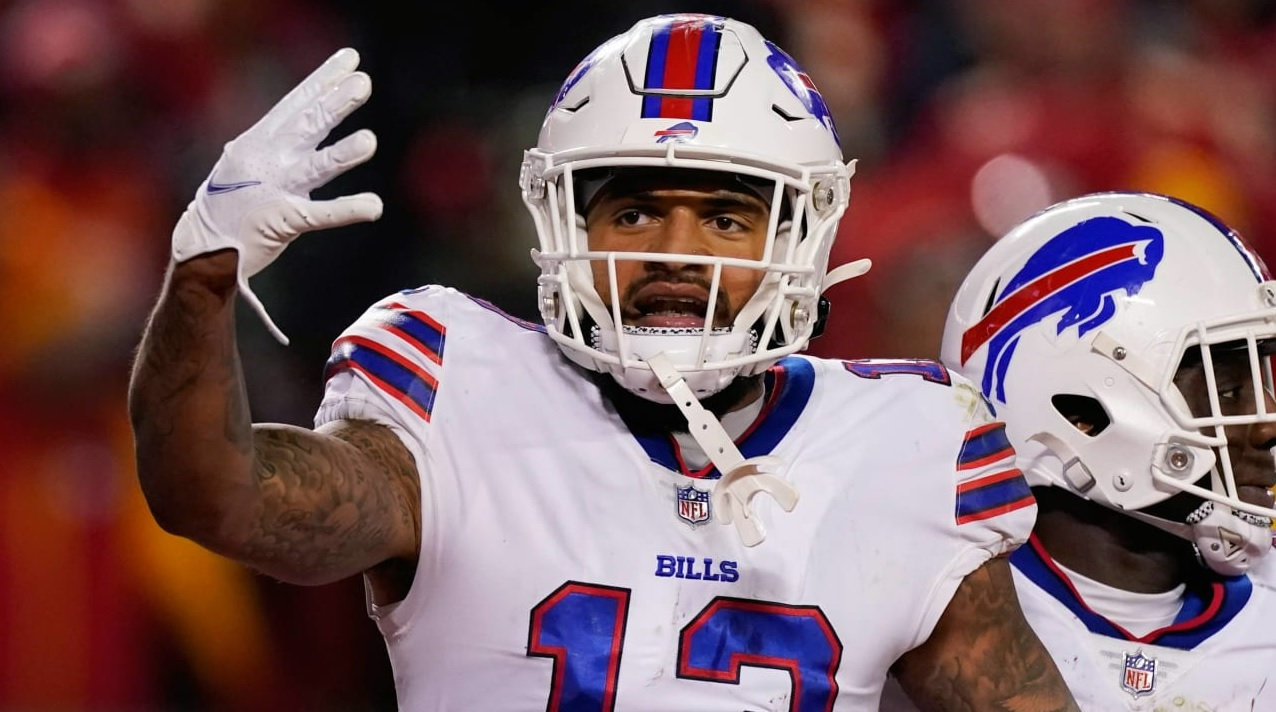 Weird thing. I started writing this article just now, and when I looked up, Gabriel Davis had scored another TD against the Chiefs. All joking aside, what a performance from the Buffalo Bills second-year wide receiver. A 201 yard, four-TD performance that should have led his team to the AFC Championship Game (never play prevent defense, kids).

But now, all the talk this week has been the worth of Gabriel Davis. Is he worth a second-round pick? Could he be worth a first-round pick now? Well, let’s pull the reins a bit here and put Davis (and other notable playoff break-out performers) into some context. Is this a sign of great things to come for a receiver only turning 23 this offseason? Or is this just a flash in the pan?

Davis is not a completely unknown name amongst dynasty owners. The second-year receiver finished with over 100 fantasy points for his second consecutive season. He has amassed 1148 yards and 13 touchdowns in his first two years in the league. And when you add that Josh Allen is his quarterback, Davis is a pretty interesting prospect.

But let’s put this into some perspective. Davis has finished as WR54 and WR53 in half-point PPR his first two years. While he is rostered in many leagues, his output has not won anyone a fantasy playoff game the last two years.

Davis has shown some promise as a fourth-round pick without much hype coming into the league. And with last Sunday’s break-out, is it the emergence of Davis as a top 24 WR in fantasy?

The Case Against Acquiring Davis

While you may see a guy putting up 50 points against a Super Bowl favorite’s defense as clear evidence of a break-out, I would be much more cautious.

Let’s take a look at the Buffalo Bills team as a whole. In 2020, Buffalo boasted Stefon Diggs, Cole Beasley, John Brown, and Davis as their receiving core. In 2021, Brown was replaced by Emmanuel Sanders.

In those two seasons, Davis finished third and fifth (also behind TE Dawson Knox) in targets. Even worse, he finished fourth and sixth in team receptions with RB Devin Singletary out-catching him both years.

Are 201 yards and four TDs this past week (and 242 yards and five TDs in both playoff games combined) exciting? Absolutely. But is this evidence of a break-out into a star? I sincerely doubt it.

Not to knock Beasley, Brown, and Sanders, but if Davis is getting out-targeted and catching fewer passes on a year-long basis than these three names, I don’t have confidence in some miracle awakening due to one playoff game.

Davis is not the first guy to get a huge fantasy value boost due to a playoff run. And he won’t be the last.

In 2018, Sony Michel had a decent regular season with 931 rushing yards and six TDs. Nothing to write home about, but promising for a rookie. Then the playoffs came along, and Michel racked up 336 yards and six TDs in just three playoff games.

Should we have believed more in the 71 yards-per-game regular season performances or the 112 yards and two TDs-per-game playoffs? Well, in hindsight, the answer is obvious.

In 2019, Damien Willims had 498 yards and five TDs in 11 regular season games. But in the playoffs, Williams racked up 196 yards and four TDs in just three games. Williams opted out from the 2020 season, but 2021 showed that this playoff run was more of a set of circumstances than a showing of things to come.

Also, in 2019, Raheem Mostert had 772 yards and eight TDs in the full regular season but rolled for 336 yards and five scores in the postseason. A couple of injury-riddled seasons later, Mostert is not worth much in fantasy football.

Are these circumstances precisely the same as Davis? No, they are all different. But they are examples that a good playoff run does not equate to regular season top-tier success.

I just took a look at actual trades involving Davis that have been executed in real fantasy leagues using the Dynasty Nerds Trade Browser in DynastyGM.

Here are three in a row to give you an example of his going rate right now:

Davis has been the WR3/WR4 in his own offense because he can’t outproduce Cole Beasley, John Brown, or Emmanuel Sanders on a full year basis. He hasn’t had more receptions than his team’s running back his first two years in the league.

I would never spend first-round capital on Davis. The first round of rookie drafts is the only place to get affordable young talent that can truly break out into a superstar. Davis is not at this level.

Some of you may disagree, but I think Davis continues to be a fringe WR3 for most of his career. He’s a player that is better to have in a best ball league for games like last Sunday than to have in a league where you will set a lineup.

If you are a Davis owner, look to capitalize on this surge in value. If you do not own him, be very cautious before acquiring him.

It is rare for a true superstar wide receiver to take more than a year to become a prominent asset. I talked about this in my last article, Assessing the 2021 WR Class After Their Debut Seasons.