Boom! Another massive Trade has happened with Tyreek Hill going to the Dolphins! @DarthDbacks has the latest on the trade and what it means for YOUR dynasty team! 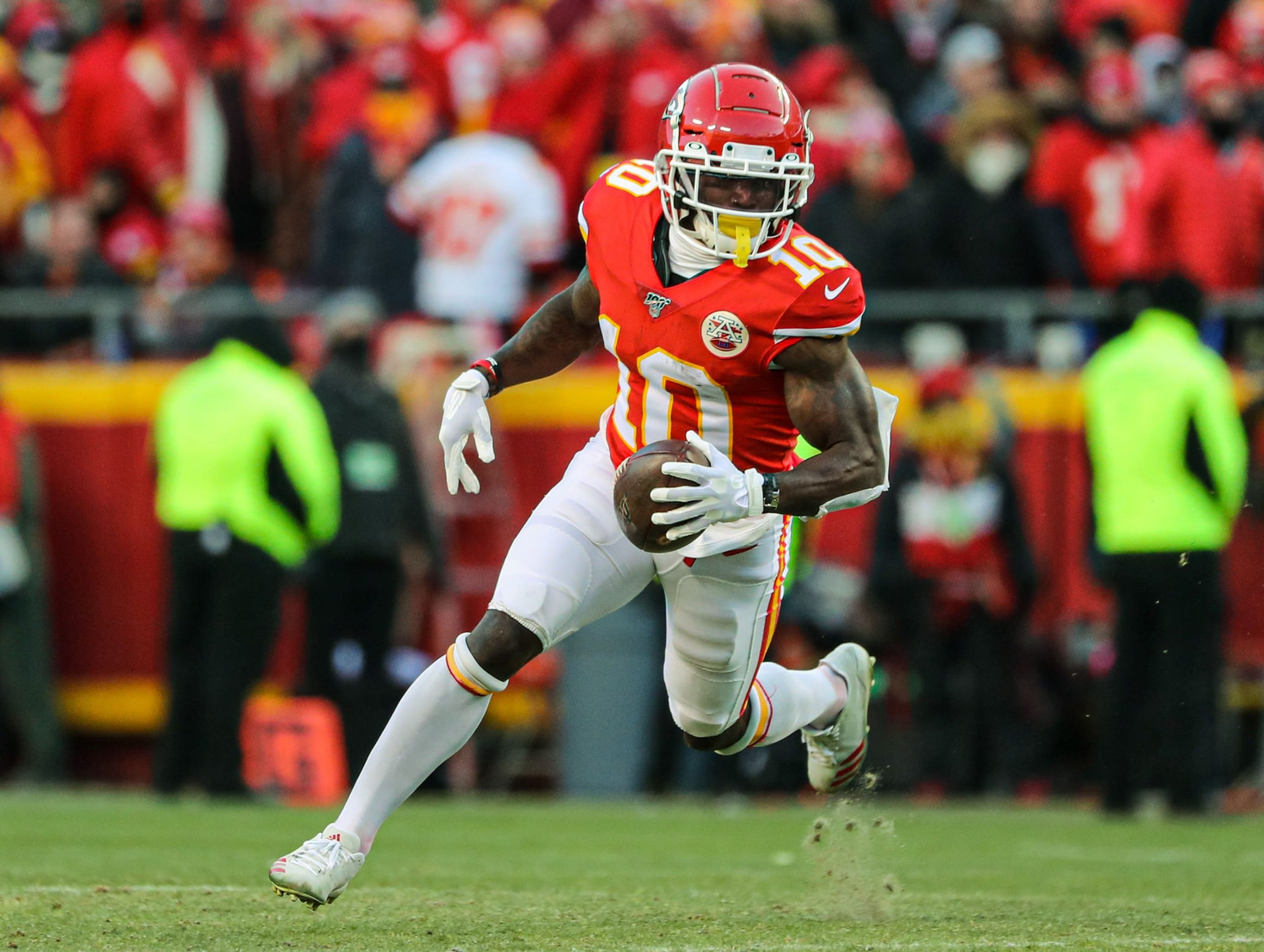 In case you missed it this morning, another massive NFL BLOCKBUSTER just occurred. This time, it involved the Kansas City Chiefs shockingly calling it quits on a Tyreek Hill extension and trading him to the Miami Dolphins for a massive package. The trade details are below.

That’s a massive package and more than the Packers got when they dealt Adams. As soon as the trade was announced, so was a new contract extension for Hill and the Dolphins. It’s a four year/$120 million extension with $72.2 million becoming fully guaranteed in 2023. With the extension in place, Hill is with the Dolphins through 2025.

Why the Chiefs dealt Tyreek Hill?

Despite Hill accruing yet another year of over 1,200 yards, 100 catches, and nine TDs, the Chiefs decided to deal him. Apparently, they had been struggling in contract extensions and after seeing what Adams got for the Packers realized that they should deal while the market is hot. The market IS hot. The Jets and Dolphins were the finalists when Hill decided to join Miami. It helps that Hill lives in Miami in the off-season. The Chiefs feel that this draft is deep in WRs, and with extra picks, it will help them restock their depth chart after giving Patrick Mahomes that cap-crushing contract.

Why the Dolphins trade for Tyreek Hill

Well, it’s clear what the Dolphins are doing. They still have Tua Tagovailoa on his rookie contract for three more years. With a clear offensive genius at coach in Mike McDaniels, the Dolphins are finally committing to building around Tagovailoa. This includes pushing all-in to win while their QB is on a cheap cap-friendly contract. Their moves this year have been all about strengthening the offense for the young QB. That includes improving the woeful offensive line with Terron Armstead and Connor Williams. The team also added WR Cedrick Wilson and RBs Chase Edmonds and Raheem Mostert. Combine those with Hill, Mike Gesicki, and Jaylen Waddle, and that’s an All-Madden team. Yes, it will be great in the real NFL too.

After two much-maligned, poorly coached years with former Coach Brian Flores at the helm, the Dolphins are telling the NFL they are here to compete and believe Tagovailoa is a franchise QB.

There’s no other way to put it than this, Hill’s value in a dynasty is lower. He will be the WR1 of the Dolphins, but Tua is not Mahomes, and there are more mouths to feed. In KC, the offense revolved around Mahomes throwing the ball to Kelce or Hill 75% of the time. Tagovailoa is not a noted deep-ball specialist either, Hill’s specialty. However, McDaniels comes from the Shanahan coaching tree in which plays are routinely drawn up to get big yards after catch or to open passing lanes for their QB/WRs.

In this sense, Hill won’t suffer at all. His ADOT might drop a bit from 9.4, but his receptions should stay around 100 once again. I’d expect his targets to come in around 130 instead of the 159 he got last year. He’s going to be a mid-WR1 instead of a top-3 fantasy WR. However, that’s still good. Hill might get more TDs and more rushing opportunities which can only help your fantasy score. I could easily see McDaniels use Hill and Waddle as Deebo-Subs.

Last year on the Chiefs, Hill had roughly 25% of the targets. I see him at the very least maintaining that same area of target share on the Dolphins. The yards may go down a tiny bit because of the depth of targets he will see. I wouldn’t be surprised to see Hill push a 30% target share, in which case, he should still be a top-3 option. Either way, his price isn’t changing. It’s a monster price of at least 2-3 early-firsts since he’s a cheat code.

There’s no way to acknowledge that Hill leaving the Chiefs significantly hurts Mahomes but helps Juju Smith-Schuster and Travis Kelce. Mahomes’ value will stay flat or drop the tiniest bit due to overreaction that he won’t have anyone to throw to. Since Mahomes is still a top-3 fantasy QB, take advantage of that if you can. It’s not like he doesn’t have weapons either. With two late-first-round draft picks this year, you can 100% expect the Chiefs to take a WR.

What do we make of Smith-Schuster, who just joined the team? Well, he’s now the WR1 for the Chiefs. That’s HUGE. While he’ll be handling the slot most likely, the number one target out of the WR-room is a must-have for fantasy owners. I’d expect Juju to put up 1,000 yards+ and close to 100 catches if healthy. Also, Travis Kelce’s shares rise since he’s the guaranteed #1 option in this Chiefs offense. No longer is he dogging it out with Hill for most targets. I wouldn’t be surprised if Kelce sets another new record in most receptions by a TE or most targets by a TE or both. Their dynasty values might have reached a new high this off-season.

In all honesty, unless I’m pushing all-in to compete this year, I’m trading both Kelce and Juju. Smith-Schuster should be worth at least an early-mid-first or more when a few hours ago, he was worth maybe a late-first. His value will drop if the Chiefs draft a WR in the first round. Take advantage of the over-reactions. As for Kelce, his value is two early firsts at least. He’s the clear-cut TE1 for at least two more years. TEs are hard to come by, so take advantage of the market if someone’s desperate for Kelce or a TE. I’d instead acquire a younger TE like Hockenson or Goedert and pocket the extra first/s. As for Mecole Hardman, don’t acquire him. His target share isn’t rising.

Dynasty Impact for the Dolphins

As mentioned above, Tua still has two years and an option year left on his cheap rookie contract. That’s why the Dolphins are pushing all-in. The same is happening with the Chargers and Justin Herbert. Tua’s the biggest winner in this trade. For two years, he and fantasy players didn’t know whether he was the true future of the Dolphins at QB. With a coaching staff that supports him and excellent talent around him, Tua’s been given everything he needs to succeed.

Tagovailoa should set career highs in yards, attempted passes, touchdowns, and every passing category. The Dolphins will be scoring to keep pace with the rest of the vaunted AFC. I’d expect big things with a fully coached and healthy off-season for Tua. This past week, you could’ve acquired him for probably a late-QB2 price of an early first. Now, he’s worth a late-QB1 price, especially since he’s just 24.

Don’t be surprised if it takes three firsts in SF to acquire him. If you’re entering a rebuild, look at selling Tua at the highest price he’s been his whole career. If you’re mid-rebuild, I’m holding him. He’s young enough to see you through it. As for if you’re competing and you have Tua, I’m holding. He’s probably the best QB3 you could have on your team. He’s got the upside of a QB1, is young, and is at worst a QB2.

While Chase Edmonds is the new back, he’ll be sharing time with Myles Gaskin and Raheem Mostert. Chase will be the passing down back, so his ceiling is that of a mid-RB2. More than likely, he’ll be a late-RB2, high-end RB3. I don’t see him getting enough rushing work unless Mostert once again gets hurt. As for Mostert, he’s going to be the rusher. He’s just an RB3 for now. Once again, their values don’t change. These four players and any other skill guys on the roster will have split a 29% target share. In that case, they are fantasy bench fodder/bye-week fillers.

The Wide Receivers and Tight Ends

What about the duck? I mean Waddle. He WILL be fine. In fact, this trade might even help him. Now he won’t receive the majority of the opposing defense’s attention. No CB1s will be on him. That’s good. Plus, Coach McDaniels has already spoken about how much he plans to use Waddle and why wouldn’t he? The first-round pick went off last year for over 100 receptions and 1,000 yards. He’s Miami’s version of Deebo Samuel, only healthier. I’d expect Waddle to get roughly 23-24% of the targets, which is plenty for him to be at least a mid-WR2. Last year, he had 27% of the targets. It’s a slight downgrade, but it evens out if he gets more rushing work. Waddle is legit. He will command targets. After all, offenses can support two elite WRs in fantasy.

This is under the assumption that the Dolphins’ offense plays like the 2021 49ers offense. Meanwhile, I’m looking to buy Waddle NOW. If people are panicking and selling Waddle, I’m buying. I’d gladly pay a first for Waddle since he should be worth more. See if the Waddle owner in your league is nervous. It’s a worthy trade to make right now.

One player who it hurts is Devante Parker. His big-money deal hasn’t worked out. After another injury-filled season, don’t be surprised if he’s a post-June 1st cut or if the Dolphins trade him to clear some cap. He has zero guaranteed money left. Plus, if he’s cut post-June 1st, he’ll save the team over six million in cap savings. That’s worth it alone, as Parker is now the WR4 at best.

Cedrick Wilson will see himself fall to the 4th/5th option in this passing offense while working as the WR3. Expect occasional big games, but he isn’t going to do a ton. Not worth a buy.

What about rising star TE Mike Gesicki, who was franchise tagged? Well, his value is still the same. He will have his big games, red-zone looks, and be part of this offense. You could say he will serve the Kittle role in this offense only with fewer targets. Last year, Gesicki had roughly 19% of the targets. I would push that down to 17%, but it could be the same as last year. In SF leagues, Gesicki is still worth a late-1st, early-2nd. I could see him having nearly the same season as last year. His value is static.

Congrats to the Dolphins fans and the owners of Hill, Tagovailoa, and football in general. Once again, the NFL has managed to take over all the attention and shock the sports world. Tyreek Hill and the Dolphins are about to shock the world.

Make sure to subscribe to the #NerdHerd, where you get exclusive content, dynasty/rookie rankings, and DynastyGM! Additionally, if you want 15% off of ANY SUBSCRIPTION, USE PROMO CODE ‘MAYTHEFORCEBEWITHYOU ‘or CLICK HERE.