What does history say about the landing spot in the NFL draft of your favorite rookie hopefuls? 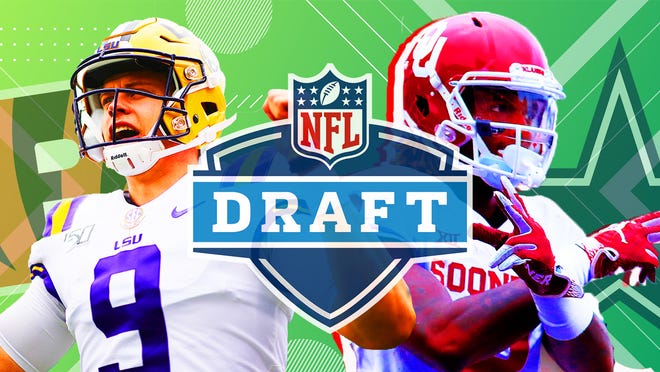 It’s no secret that the order of the NFL draft is the single best quantifiable predictor of fantasy success to budding NFL players. It’s a rare moment in which NFL teams have no choice but to provide their unadulterated opinion on the value and fit of any individual player. But after obtaining this information from NFL GM’s, any commentary from team management is clouded and often equivocal. Much like driving a new car out of the lot immediately reduces its value, the same thing occurs with regard to a team’s public stance on a player once they leave the draft room. But the NFL draft cannot hide a team’s intentions. It acts as a prism into the thoughts of NFL GM’s before they leave the lot. And you as a dynasty owner can leverage this to improve your dyansty team.

After studying the data going back to 2000, I looked over some positional trends relating to draft selection. Given that the 2020 draft is now complete, let’s explore these differences and use this to provide some clarity as far as which player’s chances of becoming stars were or were not necessarily hurt by the results of the draft.

To determine how successful a fantasy player was in his first four years in the league, I developed a modified median-like approach. I simply took each player’s second best season of those four and used that as the metric. This is preferable to straight average because it doesn’t unduly penalize players who might have had one abnormally down year or suffered an injury causing them to drop into the bottom 100 or 200 at their position. With using second-best season as the metric, you know that you are getting at least this production in half of your first four years with any player. Here were the results:

The graph above plots what to expect out of each fantasy position based on how many rounds of data to correlate draft selection on. For instance, any dark navy blue plots took all Round 1 results since 2000 (per position) and correlated the exact selection number (1 – 32) on that player’s second-best seasonal position ranking.

For example: in 2016, Ezekiel Elliott was the fourth selection of Round 1 of the draft. In his first four years in the NFL, his second-best season finish was as the RB3. So for Elliott, his draft selection (4) is correlated to his second-best year (3). When we add the same two figures for all other running backs taken in the first round of the NFL draft since 2000, the resulting r-squared is less than 0.2, which indicates a very weak correlation (as indicated by the dark navy blue point for Running Backs.

That explains the navy blue grouping for Round 1. The next shade of blue down (representing players taken in Rounds 1 and 2) uses the exact same process; however, this grouping brings more data into the fold. In doing so, we can investigate if any meaningful differences exist across draft selections between Round 1 and Round 2. This same methodology is applied over larger groupings to eventually include all rounds of the draft. In doing so, the loss in fantasy value for each round added begins to appear for each position.

Let’s go position by position and find some takeaways we can leverage.

The data shows that hit rates on QB fall drastically right off the bat in Round 1. We know this because there is a pretty high correlation between fantasy success and draft selection number when only considering Round 1 data since the year 2000. A higher selection (lower number) in the first round is going to do much better than a later selection (higher number).

It might not be surprising to learn top drafted QBs are starkly better than later selections but the graph better demonstrates its magnitude. The difference between taking a QB drafted in the top of Round 1 vs the bottom part of Round 1 is on par with the difference in taking a Round 1 RB vs a Round 6. That’s how picked over QB becomes at the back-end of the first round.

2020 prospects like Joe Burrow and Tua Tagovailoa were both expected to be nabbed high in the first round // Round 1. However, Justin Herbert was not, yet landed soon after at selection #6. While film room scouts might have credible reasons to heed expectations for Herbert, draft position alone suggests he has a chance for some level of success in his first four years. After Herbert (at most), the data suggests taking chances on any of the guys listed below to be a complete shot in the dark. This means that Jordan Love is not a great bet to take a chance on. Just because Aaron Rodgers was a successful late Round 1 selection doesn’t mean history is going to repeat itself.

Running Backs and Quarterbacks have polar opposite round one implications: while the data highlights the importance of where a Quarterback is selected in Round 1, the particular selection an RB is taken in Round 1 means almost nothing (r = .15). In other words, it matters very little where in Round 1 a Running Back is selected. What matters most is that the Running Back IS selected in Round 1. One possible explanation for this is that the gap in talent from the first few Quarterbacks and the rest is so massive. There’s a reason it’s the most important position in sports.

Take a look at the rest of the running back plots. As you extend the data to include more rounds, the correlation grows. Running backs taken in later rounds are increasingly less likely to add any value to dynasty owners. There simply aren’t that many diamonds in the rough at the running back position. And as far as the running back goes in real football, the skill set of practically any running back is basically irrelevant in determining his production on the field. Instead, it’s the commitment from his team to put him in a position to produce. And this commitment is revealed by the draft capital spent.

This data backs up the hype on Clyde Edwards-Helaire (CEH). While considered a much lesser talent than many other RBs in his draft class, him being taken as the first pick for the Chiefs reveals that Brett Veach and Andy Reid are going to fit the offense around CEH, as apposed to the other way around. The fact that Kansas City is a perfect landing spot for a pass-catching RB is icing on the cake. The talent level is practically irrelevant.

Take a quick look at the 2020 running back draft class:

Historically speaking, anyone taken in Round 2 becomes a higher risk than round those taken in Round 1. This is where things get a little weird because in recent years the NFL has slowly begun to embrace the reality that top-skilled running backs provide little worth to NFL teams over those of average skill. So teams that might have taken a running back in round one – even just a few years ago – might wait until round two or even later. So when you look at the names drafted above in Round 2 of the 2020 draft, there is a lot of potential for one or more of these guys to be competing for the overall RB1 rank sometime in the next four years. Get as many of these second rounders as you can.

Here is the wide receiver class now for 2020:

Many figured CeeDee Lamb would be first off the boards for wide receiver, but instead he landed third. The data suggests this is not a big deal. I would not be surprised if the Cowboys cut Cooper loose in the near future and turn this standout into a perennial WR1 in fantasy football. Even with Cooper’s new mega-deal, the particulars could give Dallas an out after this year.

Meanwhile, Henry Ruggs taken as the first off the board doesn’t necessarily increase his value as much as it might appear, just as Denzel Mims dropping further than expected doesn’t really hurt. The data does suggest to stay within these two players for fantasy relevance. Anything past round two is going to be hard to find value; and after round three, it’s a complete crap-shoot.

As for tight ends, there’s no position with a greater drop in value after the first round. With that said, some of the best of the position blossomed from round two selections (Rob Gronkowski, Zach Ertz, Hunter Henry). But despite these few mega-studs at the tight end position, hitting the lottery on the next generation tight end is going to be very difficult to do outside of round one. But hey, if you feel being a hero, go on right ahead. Just have a back-up plan.

All in all, much of what the data gleans already match general consensus, but visualizing the effect that later rounds have on fantasy outlooks across each position is something I feel every dynasty owner should understand in order to take educated chances on the NFL’s next generation. .