AFC West teams upgraded their weapons on the defensive line and hired some new coordinators. Take a deep dive into the new look AFC West and which players are top picks for your IDP team. 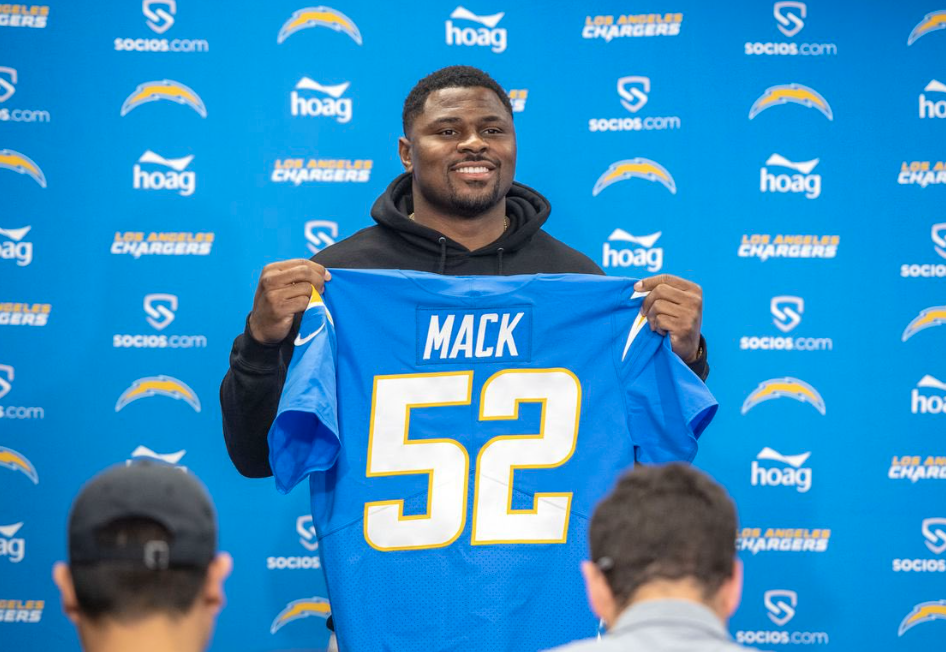 AFC West teams upgraded their weapons on both sides of the ball this year. The attention is focused on the offensive weapons—and understandably so. Davante Adams was a league-altering acquisition by trade. Russell Wilson is getting ready to ride with Jerry Jeudy and Courtland Sutton.

But the additions came on the defensive line as well. Khalil Mack went to L.A. for a second and a sixth-round pick. The Broncos swept in and poached Randy Gregory from the Cowboys for the same price when Gregory didn’t like some of the provisions Jerry Jones was trying to lay in his contract. The Raiders added Chandler Jones. I look through each AFC West team and pick my favorite pass rusher on each.

Because edge rushers are typically classified as “DE” in fantasy lineups, I will be analyzing edge rushers, regardless of where they line up, along with DTs. Getting a monster talent can set your team apart in IDP leagues. So I will choose my favorite fantasy DE or DT on each team.

Randy Gregory started to look good for the Cowboys when he was able to stay on the field more. He had missed 54 games due to suspensions between 2016 and 2020. He missed 5 games last year due to a nagging knee injury. In 436 snaps, he made 6.0 sacks, 19 tackles, and 4 for a loss. The hope is he can do more if he gets something like 700 snaps, but he has never gotten more than 500.

Gregory lined up on the line for the vast majority of the snaps in his career, but he’ll be operating more often from deeper in the box in the Broncos 3-4 defense. New defensive coordinator Ejiro Evero says he will keep the 3-4 and parts of the Vic Fangio defense. Could playing in the 3-4 could give him the chance to make more tackles and sacks?

Bradley Chubb was huge from an IDP perspective his rookie season, compiling 12.0 sacks, 60 tackles, including 14 for loss, and 2 forced fumbles in 2018.

But even then, he was lacking in terms of effectiveness for his team’s wins and losses. He missed almost 20 percent of the tackles he attempted (a number that has increased in later seasons), and PFF graded him at 67.4, a borderline grade only good for 48th at his position.

When he was on the field in 2021, he did not play well. He made 17 tackles in 7 games (41 averaged over a season), for 0 sacks, and missed 7 tackles. In 2020, his only other season in which he was mostly healthy, he did play somewhat better, making 7.5 sacks and missing fewer tackles by Pro Football Reference’s measure. Playing for a new contract, Chubb has plenty of reason to try to step up.

I am not confident in either of these guys, but if I had to pick one, I’d probably say Chubb since he has established a higher ceiling already. A sleeper in dynasty leagues might be Jonathon Cooper. Coming into the starting lineup after Von Miller left, he vastly overperformed his stock as a 7th rounder.

The Chargers will have Joey Bosa and Khalil Mack on opposite sides. Opposing offenses will be trailing the Chargers frequently and throwing the ball a lot. Those two will both be getting after the quarterback.

Bosa is coming off a 10.5 sack campaign, and he has had over 10.0 sacks in 4 of his 6 seasons. Despite missing ten games after having season-ending foot surgery, Mack recorded 6.0 sacks in 7 games (14.5 season average). His tackle numbers were down at 19, though, and he hasn’t had more than 50 tackles in a season since 2017. Bosa recorded 51 tackles in 2021 and 67 in 2019. Bosa is also five years younger. He’s right at the age defensive players typically peak, while Mack appears to be on the decline at age 31.

I prefer Bosa in both dynasty leagues and redraft.

Chris Jones has secured a PFF grade of over 80 every year since his sophomore year in 2017. Last year he notched 10.0 sacks, his highest total since 15.5 in 2018, while he had over 8 in each of the two seasons in between. Lining up on the line for all his snaps in the 4-3, he does not make many tackles. His career-high for solo tackles in a year is 22.

On a Chiefs defensive line lacking IDP talent, Jones is the best choice. He’s easily the second-best tackle in leagues that play DT as a unique position.

The Raiders’ defensive alignment is uncertain following a coaching change. New coordinator Patrick Graham ran a 3-4 base defense with the Dolphins and Giants, his latest job, but he always emphasized versatility and showing offenses multiple looks. While he hasn’t committed to a new alignment yet, the assumption is that he will do the same thing, using a 3-4 hybrid.

Personel-wise, DE Yannick Ngakoue, who notched 10.0 sacks his only year in Vegas, was exchanged for DB Rock Ya-Sin. OLB Chandler Jones, whom Graham coached as defensive line coach in New England, and who played in a 3-4 system in Arizona, comes in. Nicholas Bilal and Vernon Butler both signed as free agents to anchor the end positions on the line.

Maxx Crosby, the other edge rusher, will move from lining up on the line to the OLB position. He has never played in the 3-4. But he says he’s optimistic the coaching staff can get him ready and utilize him effectively.

Crosby showcased breakout success in his third season in 2021. He tallied 56 tackles and 30 hits on the QB, and 8.0 sacks. He’s produced good sack numbers before—10.0 as a rookie and 7.0 as a sophomore—but he got to the QB in total more times than his previous best. His missed tackle rate dropped from 20% as a rookie to just 5%. His pass rush productivity, according to PFF, was fourth-best in the league, and he led the league in total pressures. The increase in his total tackles number was driven in part by a steep decrease in missed tackles.

If Crosby can keep pressuring the passer the same number of times but turn those pressures into sacks at a higher rate, he could have over 20 sacks in a season.

Chandler Jones had another double-digit sack total (10.5) in 2021. It was his sixth straight double-digit season, excluding 2020, in which he played in just 5 games. Five of those sacks came all in Week 1. He pressured the opposing quarterback 47 times, according to PFF. His career-high is 76 pressures, and he made 75 pressures in 2019. He is 31 years old now, but his play hasn’t shown any drop off.

Still, given Jones’ age and Crosby’s emergence, it seems Crosby has the potential to keep improving his game. He might even lead the league in sacks. Chandler remains a solid player, but even if he keeps it up, he doesn’t have as many years left.

Crosby is easily the better choice for dynasty, and I’d lean towards him in redraft, too, for his upside.

Breakouts, busts, and getting the boot: Second year linebackers
Lessons from My First Year as Commissioner of an IDP League
Black Friday Sale