Its IDP Playoff Time! @Glosser13 returns from a short stint on the IR to give you the start/sit recommendations for your IDP viewing pleasure. 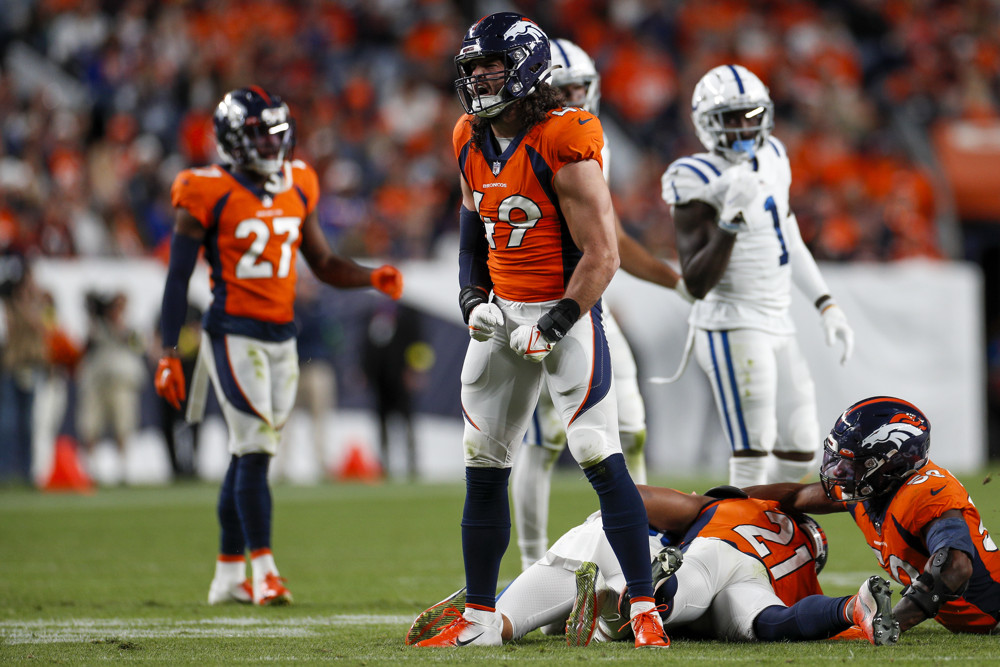 It’s officially playoff time, my fellow IDP Nerds! First and foremost, I apologize for my absence last week. I did not want to leave you hanging, but unfortunately, the second round of COVID had other ideas. I trust what I have taught you all year helped you make those difficult lineup decisions a bit easier last week. To keep the article as consistent as possible, we will circle back to Week 13 and review our results. We came in at 85.7% accuracy, which was our second-best week of the season. This brought our season accuracy up to 64.3% heading into the playoffs. Let’s dive into this week’s calls, as the most important time of the year is upon us.

The former University of Syracuse linebacker has been all-world this season. It’s rare as a dynasty manager that you can find such a consistent player on the waiver wire after Week 1, and he just delivers for you. Zaire Franklin is on pace to set career highs in every category as he leads the Colts’ defense in tackles heading into Week 15. He has averaged 19.4 fantasy points per game while recording 10 stops per game. The Colts linebacker has not disappointed all season long, and there’s no reason not to have him in your lineups in the most important matchup of the year.

It’s been a long time since I’ve seen a rash of injuries attack one position like the Cleveland Browns have dealt with this season at linebacker. The Browns have been through about five different linebackers this season, and it’s truly a last-man-standing situation for IDP managers. Deion Jones was acquired ahead of the NFL trade deadline after coming off an injury himself in the off-season.

Deion Jones has been a great stash player for IDP managers who could afford to do so. Jones has been hit-and-miss in his seven games played with the Browns. From a fantasy production standpoint, there’s zero doubt that he can still play. In games where he has played at least 30 snaps, he scored double-digits in each contest. Jones will be forced to play over 50 snaps again this week with the Browns down to practice squad options behind him.

The game script greatly benefited the Miami defense from a fantasy perspective in the first meeting between the Bills and Dolphins this year. The Dolphins’ best option at defensive back Jevon Holland played a career-high 92 snaps and also scored a career-high 38 fantasy points (38). I’m not sure the game will play out quite the same way, but in his first three meetings with the Bills, Holland scored over 10 fantasy points in each game. The weather might be cold and snowy, but that shouldn’t scare dynasty managers away from having the former Oregon safety in their lineups in a must-win matchup.

Marcus Davenport has struggled with inconsistent play but mostly stayed healthy for the better part of his first four seasons. Unfortunately for him, things have not changed much in what appears to be his last season for the Saints. The Saints EDGE rusher has a clean bill of health heading into a meaningless late-season matchup with the Atlanta Falcons. The upside is there with him having a big game against rookie Desmond Ridder in his first start, but I believe the New Orleans front office has seen all they need to see. I think they will let their younger players earn most of the snaps and see what they have heading into next season. The defensive line position is historically thin, but even with that, there are better options than Marcus Davenport in a win-or-go-home scenario for your dynasty teams.

Frankie Luvu is another waiver wire find who has had a very productive season. He has stepped up big for the Carolina defense, and despite being limited in a few games and missing two with an injury, he’s on pace to have his best season as an NFL pro. The Panthers linebacker will set career-highs in tackles, sacks, and interceptions this season. His 200+ fantasy points have been a gift for dynasty managers all season long. I trust Luvu to have another productive week in what will likely be a defensive slugfest with the Pittsburgh Steelers.

This one is a trust-your-gut call more than anything. I could have picked any of the Philadelphia Eagles EDGE rushers and been right here with the rate the Bears give up quarterback pressures and sacks. I truly enjoy watching Jaquan Brisker play football and have been waiting for him to return after missing the past two games.

Jaquan Brisker has been so good this season in a surprisingly productive rookie class, and he might be the best in that group. I like his chances to get back to the solid performer he’s been for most of the season. There’s a good chance he will play a large volume of snaps against a very dynamic Philadelphia Eagles offensive attack.

We rarely get a ‘Revenge Game’ scenario so late in the season, but we have one with Justin Reid returning to Houston for the first time since leaving in free agency. The former Houston Texan has found a home with the Chiefs and has been a much-improved player from a coverage standpoint.

Unfortunately, that has not been shown in his fantasy production. Although I typically spin these ‘Revenge Game’ scenarios as a positive, that won’t be the case with Justin Reid. The Chiefs’ safety has recorded 10+ points just once in his last six games, and I don’t expect that to change against his former team this week.

This one gives me all the sadness. Quinnen Williams is a special talent and a huge reason the Jets’ defense is as good as they are. Williams has scored in double-digits in all but two contests this season but is coming off a calf injury that looked very similar to what a non-contact ACL injury looks like. The Jets’ defensive anchor has been listed as questionable heading into a matchup with the Detroit Lions, who have given up the third-fewest sacks (19) this season. I’m fearful that if he plays, it will be situational in a game the Jets should win at home as a contending playoff team.

This game has taken a turn for the worst as the season continues. What appeared to be a Russel Wilson and Kyler Murray quarterback duel has turned into a pair of journeyman backup quarterbacks potentially squaring off.

I feel like I take turns deciding who will have more tackles every time the Broncos play because nothing is exciting about the offensive side of the ball these days. This week is Alex Singleton’s week. He recorded 11 tackles in his last game against the Arizona Cardinals. The veteran linebacker has earned more snaps, and he and Josey Jewell playing together has surely strengthened the Denver front seven. Alex Singleton has a streak of five straight games with at least 11 fantasy points. I have zero doubt that the streak will end this week.

Trying to recommend a start when the Patriots are playing is hard enough, but now playing another former Patriots coach makes it even harder. I have very little value or faith in this game, but let’s take a shot at this. I’m leaning on cornerback Marcus Jones this week, who has not only been involved as an offensive weapon as of late but has played 101 total snaps over his last two games. I’ll be honest I hate so much about this game. Jones has impressed lately, and you rarely, if ever, get a chance to start a defender who will almost be guaranteed a chance to play some offensive snaps. Take advantage of that if you can.

This is another next-man-up scenario at linebacker. The Titans’ defense has been hurt with injuries on defense at the worst time of the year, but they are leaning on their young players to step up. That’s exactly what Monty Rice has done in the past two games. He has recorded 18 tackles and averaged 17.5 fantasy points per game. The Titans are without their two starting inside linebackers for what appears to be the rest of the regular season. Monty Rice steps in with a chance to be a dynasty playoff hero for some managers in need of linebacker help.

The temptation is there, but the risk is far too great for me. I, like many others, have been chomping at the bit to see Chase Young this season after suffering a season-ending injury a year ago. I had hoped he would see limited action before the fantasy playoffs, but that has yet to be the case. He’s listed as questionable this week and might play, but with it being his first real game action in a year, I would not feel comfortable potentially eating a zero in a playoff matchup. The hope is you can keep advancing and get the star EDGE rusher back before your league championship final.

You guys know I wouldn’t leave you hanging without showing the cornerbacks some love. Rasul Douglas draws a very good matchup this week in primetime against a new-look Los Angeles Rams offense. The Green Bay cornerback has averaged 18.7 fantasy points over his last three games and will be allowed to play a Rams offense that is very one-dimensional with weak weapons. I like Douglas as a top option among all NFL cornerbacks this week.

That will do it for this week. I’m excited and nervous for this week as the fantasy playoffs are officially here. It’s always the most stressful to see all the work and time you’ve put into building your dynasty roster come down to a series of two to three weeks. However, isn’t that why we play this game? The pressure of winning it all, taking home some money, hardware, and bragging rights, makes it all worth it. I wish you guys the best, and we’ll be right back next week with more IDP content for your reading pleasure. Good luck to everyone, and congratulations to all the playoff-contending teams you have.