@Glosser13 is back with the championship week IDP start/sit calls. 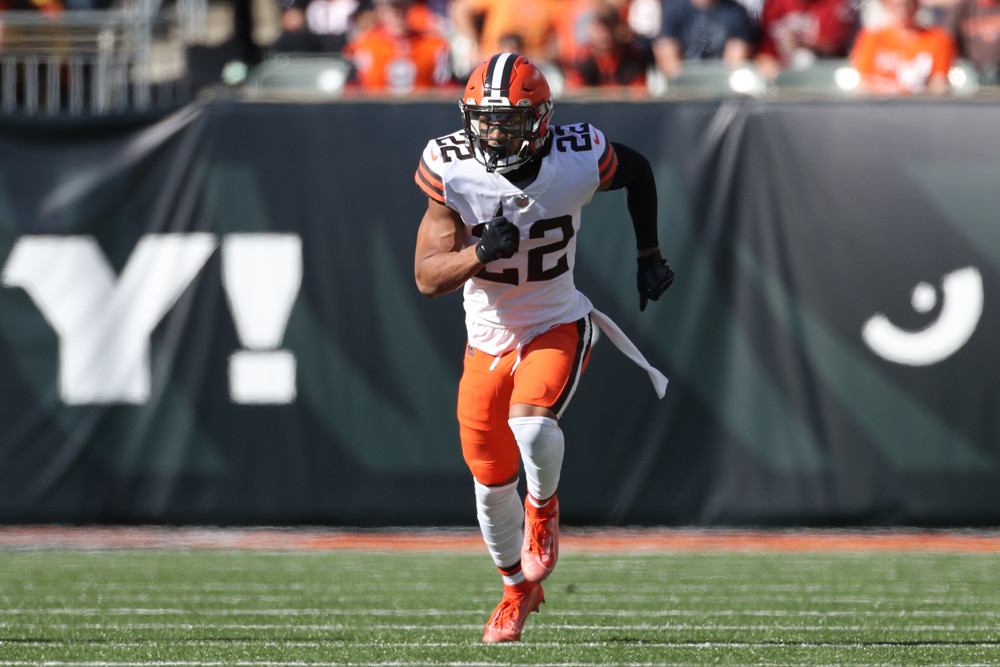 Welcome to the final edition of ‘Man Coverage,’ my fellow IDP Nerds. It’s been a long season, and all that work you’ve put in has got you here playing for something important in Week 17. It doesn’t matter if you’re not playing for the championship but setting those lineups to ensure you get a third-place finish or an extra draft pick is what dynasty fantasy football is all about.

We didn’t have our best week last week, coming in at just 60% accuracy, but given how things happened on the offensive side of the ball with underperforming stars, it was just one of those types of years. As a dynasty manager, it is easy to get down on yourself. But sometimes, things happen that we have zero control over. The season accuracy total stands at 64.6%, and overall we had a very successful season predicting non-studs to start and sit weekly. Let’s get into the week 17 games.

The Arizona Cardinals safety hasn’t come close to repeating his 2021 totals of over 250 fantasy points. However, he’s heated up lately, averaging 18.2 fantasy points per game over his past two contests. The Cardinals’ secondary has been injured most of the season, but the biggest impact will be Budda Baker missing the final two games. This should be a significant boost for Jalen Thompson. IDP managers can bank on another double-digit tackle performance from the Cardinals’ defensive back.

Nicholas Morrow has been one of my favorite trade targets this year, specifically after the trade that sent All-Pro Roquan Smith to the Baltimore Ravens. The veteran linebacker has been rock solid all season and, due to injuries, is now a one-man tackling crew in the middle of the Chicago defense. The Chicago linebacker has not finished under ten fantasy points since Week 8 and continues to be a pillar of consistency for the Bears’ defense. Nicholas Morrow will play his second game against the Detroit Lions this season. He finished with 18 fantasy points in his last game against them.

The IDP managers who were able to stash the former Alabama linebacker have benefited greatly this postseason. Harris has been a slowly rising young linebacker on the target list for your dynasty team for next season. The Houston Texans appeared to get a steal when drafting him. Harris has 52 fantasy points in the last two games and has surely played a big part in getting dynasty managers to a potential dynasty championship this season. The Houston Texans offense has been very poor this season, and I expect another 60+ snaps for Harris this week, which should result in another very efficient tackling game for him.

Now look, the case can be made for Josey Jewell as easily as it can be for Alex Singleton. Both guys have been tackling machines this season for a Denver defense that doesn’t offer much else in terms of IDP value. Alex Singleton gets the slight edge for me because he has massive boom potential, whereas Josey Jewell gives you more of a safe floor.

Since the bye week (9), Singleton has not finished under 11 fantasy points in a single game while scoring over 20 fantasy points twice and over 30 points once last week. It’s the last week of your season. Trust the guy who can swing a matchup in your favor and have Alex Singleton in your lineups this week.

I think I can speak for most IDP managers about the level of frustration we have being a manager of Jerome Baker. There are flashes of him being a plug-and-play starter, and then weeks when he just disappears. Trying to find and trust a player to put up consistent numbers is extremely frustrating, especially when the playoffs start.

As much of a chance as it is for him to have a big game like he’s had over the past month, there’s roughly the same amount of chance he gives you a single-digit performance. You can’t afford to start a boom-bust player at this time of the year if you can help it.

There are few feelings as good as watching players you were forced to stash all season show up big at the most important time of the year. Kayvon Thibodeaux fits the bill as he’s been electric over the past two weeks, and luckily for IDP managers, he draws a plus matchup for Week 17.

Thibodeaux will get to line up across from the Indianapolis Colts offensive line, who have allowed the second-most sacks (56) on the season. The former Oregon Duck has collected 18 tackles and a defensive touchdown over the last eight quarters and has scored 60 fantasy points. If he has defensive line eligibility, he should be in your lineup. For what it’s worth, I’d also consider him an LB3 or LB4 option.

Kaden Ellis is another late-season bloomer at linebacker who has been very good. He took over for Pete Werner, who was having a career year. Ellis has been equally effective and offered some big performances for IDP managers searching the waiver wire for linebacker production late in the season. Since taking over for Werner, he has averaged 19.5 fantasy points per game and has not disappointed even when sharing time with Werner upon his one-game return. The moves to acquire players like Kaden Ellis late in the season could be the difference between a dynasty championship and a third-place finish.

The Tampa Bay defense has been in luck as of late having a veteran like Logan Ryan in their secondary while dealing with so many injuries. We all know things aren’t going the Buccaneers’ way this season, but having veteran leadership in their secondary has been a great benefit for them as well as IDP managers. Logan Ryan averaged 7.3 tackles per game while also averaging 14 fantasy points per game over his last three games. Mike Edwards and Antoine Winfield Jr. remain questionable nearly every game, and Ryan can play either role if they miss time at any point during the game.

The former LSU defensive back has been heating up, with 47 points combined over his last two games. Delpit has been very good this season and is on pace to record his first 100+ tackle season for the Browns’ defense. The Cleveland defensive back has just one game under double-digit fantasy p[points since Week 8 and has been playing some very aggressive football. The safety tandem of John Johnson and Grant Delpit has rewarded dynasty managers all season, and I see no reason not to stick with what got you here for championship week.

It’s rare to be advocating for rookies with such a small sample size of production to be starting on your dynasty championship rosters but welcome to the 2022 season. Luke Masterson is thriving in a next-man-up scenario, as many rookies and veteran players are this time of year. Luke Masterson has posted back-to-back 18-point performances for the depleted linebacker group of the Raiders.

The Wake Forest product has 19 tackles in his past two games, and his snaps have increased each of the past three weeks. The Raiders are an absolute dumpster fire and will likely struggle to keep the ball on offense. Masterson should see a high volume of work against the 49ers running game that will be coming downhill for four quarters. His tackle floor is safe enough to slot him in as an LB3 or better this week.

Darrell Taylor has been one of those defensive linemen stashed on your roster, and you can’t ever find the right situation to play him outside of bye weeks. I’m speaking from experience here, obviously, but he’s been trending up recently with three double-digit performances in his past four games. Like many others at the defensive line position in IDP fantasy football, it feels like you’re throwing darts at who to start. I would try to find a better matchup if you can this week and not force yourself to start a player who can potentially end up with a zero in your lineup.

This feels very familiar to last season when Rasul Douglas posted a career-high 208 fantasy points. The man seems to play his best football down the stretch when his team and dynasty managers need it the most. Douglas is a must-start in CB-required leagues and looks like a potential starter at defensive back, depending on your options. The veteran defensive back has set new career highs in tackles, sacks, and fantasy points this season while averaging 19.5 points per game over his last five games.

This one hurts and is a gut call, given it being a win-or-go-home scenario for your dynasty teams. This is a plus matchup for the Chargers’ defensive line, with the Los Angeles Rams allowing the third most sacks (51) in the NFL this season. I feel the Chargers have been getting good production as of late from their reserve role players and would like to think they keep those guys playing more snaps than usual, as it’s Bosa’s first game back since Week 3.

There’s a chance he can still get in the backfield to record a sack, but reports being the Chargers may ease him into action now that they clinched a playoff spot and have no chance of winning their division. If you have zero options behind Bosa, I don’t hate starting him here, but I look at this game as a way to get him around 20 snaps and back in game shape before the playoffs start.

Minkah Fitzpatrick and the Steelers’ defense are preparing for their second matchup with their rivals, the Baltimore Ravens. Fitzpatrick saves his best games for Baltimore as he averages 6.6 tackles per game against them over his career. He posted 11 stops in their week 14 matchup and will be given more freedom to inch up to the line of scrimmage with the Ravens’ lack of weapons in the passing game. IDP managers can trust the former Alabama safety to play some of his best football this week in a game the Steelers have to win.

The Bills leader at linebacker has been consistent since returning from injury with four consecutive double-digit performances. Edmunds gets a lot of hate from Buffalo fans and IDP managers alike, but the numbers don’t lie. He’s sixteen fantasy points away from recording his fifth consecutive 200+ point season. He may not be the most flashy, but he is a consistent player that you know what you’re getting when you put him in your lineup. I expect Edmunds to have his best stuff against a very dangerous Bengals offense. There should be no concerns for you if Edmunds is in your lineup this week.

It’s been a pleasure this season giving you guys my best recommendations. I don’t have to explain to you how difficult it is to pick a player to start and sit for each game, but I’m up for the challenge. The team of Dynasty Nerds who put these together every week appreciates your support and loves seeing you all win your leagues. I wish you all the best of luck this weekend and hope you bring home some cash, trophies, and plenty of bragging rights to your league mates. Enjoy the games and remain with us all off-season as we will bring you all the top content we can provide from an IDP perspective.