After a lackluster rookie season, many owners may be down on the Bears rookie signal caller. You shouldn’t be. You should be preparing for a big 2022. 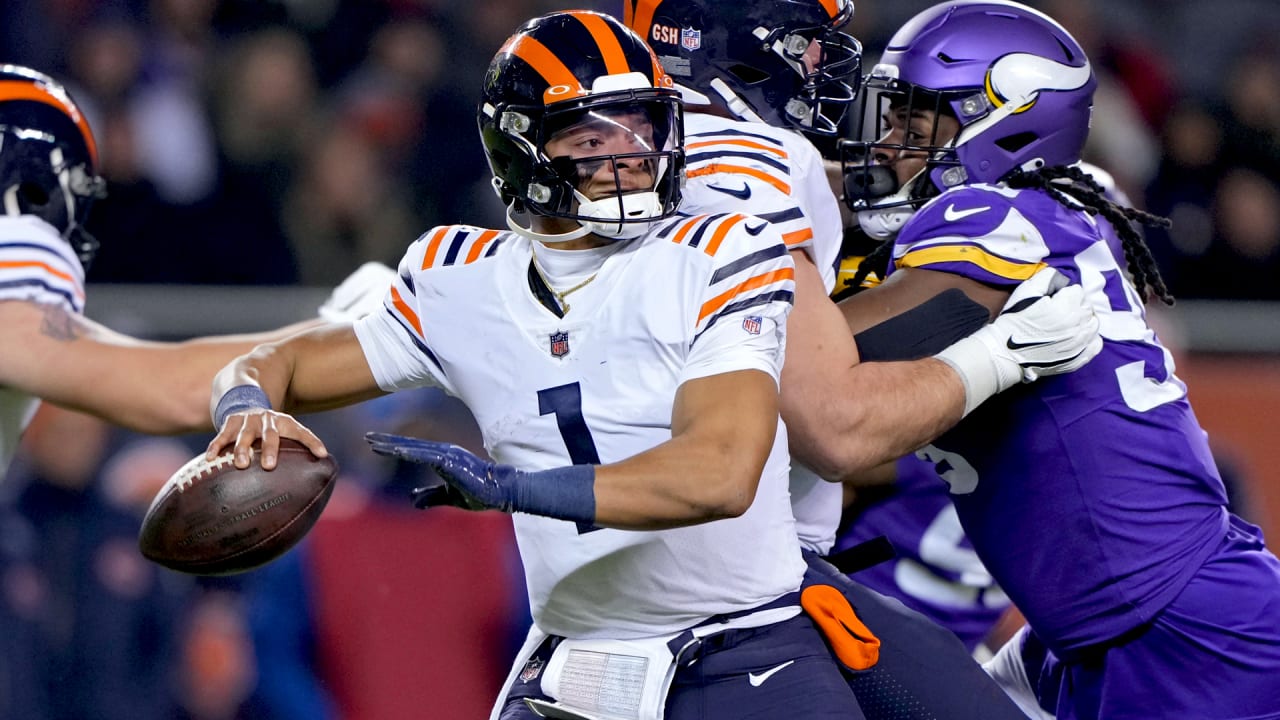 A year ago, dynasty owners, especially those in Superflex leagues, were thrilled with the 2021 QB class. With five quarterbacks taken in the first 15 picks of the 2021 NFL draft, an influx of talent was coming to the QB position.

One year later, we are looking at the class, wondering what we may really be getting from it.

Trevor Lawrence, Zach Wilson, Trey Lance, Justin Fields, and Mac Jones all failed to finish within the top-28 in points-per-game among QBs. A year of inconsistent play, rookie mistakes, and lowlight reel plays followed all five QBs, leaving owners wondering if their young signal-caller was worth the high pick they used on them.

But one name still has my intrigue and looks poised to take the next step into fantasy excellence: Fields.

Justin Fields rookie season started rockier than it needed to be.

Before drafting Fields, the Bears signed Andy Dalton in free agency. Head Coach Matt Nagy committed to Dalton being the Bears starting QB. The Red Rifle received all of the first-team reps in Bears camps. Eventually, Dalton got hurt, and the team turned to Fields. Things started slow for the rookie QB.

Chemistry was missing between Fields and several targets, namely Allen Robinson. A Pro-Bowl caliber WR, Robinson had a career-low year with 410 yards and 1 TD in 12 games. Meanwhile, Darnell Mooney, who Fields worked with during the summer, had 1,055 yards and 4 TDs on 140 targets. Maybe training camp and building chemistry do matter?

For Fields, his trial by fire started poorly. He was trying to learn a new system and adjust to the pro game. All with receivers he didn’t have much chemistry with. Fields averaged just 6.88 fantasy points-per-game in his first five starts.

Some blamed Nagy. Some blamed the Bears offensive line. Others said it was rookie mistakes and a slow throwing motion from Fields. All of these played a factor. However, as the year moved on, Fields got more comfortable. The rookie showed flashes of greatness while battling injuries and constant pressure (sacked 34 times in 10 games started).

In the final four games of the season that Fields got through (he was injured halfway through the Baltimore game), Fields averaged 19.68 fantasy points per game. Yes, this is a small sample size, but if Fields could expand this output over 17 games, 19.68 PPG would put him at QB9 last year; one spot below Lamar Jackson and one spot ahead of Joe Burrow.

Fields surge in fantasy output near the end of the season had as much to do with his arms as it did with his legs. In those four final games that Fields played the whole game, he totaled 103, 45, 74, and 35 yards rushing. When your QB averages 64.25 yards rushing a game, it comes up big in fantasy. For reference, Kyler Murray is typically regarded amongst fantasy owners as a great asset due to not only his arm but his ability to rack up rushing totals.

Murray and Fields both had injury-plagued seasons they fought through. However, both QBs had strong rushing outputs, finishing 4th and 5th on the year in QB rushing yard totals. But while Murray edged out Fields with 423 rushing yards to Fields 420, Murray did it on 940 offensive snaps in 2021. Fields had just 635 snaps.

We can make the argument that right now, Justin Fields is the fourth-best rushing QB in dynasty after just Jalen Hurts, Lamar Jackson, and Josh Allen. Those points come up big week-to-week and will help propel Fields to the top of QB lists by the end of 2022.

When you break down Fields 2021, doubters point to his passing totals.

Yes, these numbers are not exciting. In fact, they are enough to run for the trade button in your leagues. But the basic numbers are not showing the whole picture. There is a lot more to Fields 2021 than first meets the eye.

One of the biggest pluses for Fields was documented by Johnny Kinsley, @Brickwallblitz on Twitter. Kinsley is the creator of the Deep Ball Project, documenting every QB throw of 21 yards or more.

In 2021, Fields was only 10/30 on passes of 21-plus yards, a lowly 33.33%. But the main focus of the Deep Ball Project is deep ball accuracy. Fields is charted with having 8 accurate incompletions on the season. These are passes that were deemed accurate but not caught. Accounting for this, Fields’ accuracy numbers were 18/30, or 60% of his deep balls.

This was good enough for third-best in the NFL.

Additionally, the project also shows Fields was top ten in deep balls under pressure. Even better, he was tied for third-best on deep passes into tight windows.

Many owners could look at these numbers and argue Fields did not have as many deep ball attempts. His numbers were boosted when he was accurate. But I look at this and believe it is a sign of a potential breakout in 2022.

Being accurate down the field is one of the quickest ways a QB can rise in fantasy rankings. Big plays get the biggest points. And Fields has shown the potential to be an accurate and successful passer down the field.

While the fantasy output in 2021 looks dreary at first glance, Justin Fields quietly had a very promising rookie season. There is still a lot of work to be done in his development and general roster building in Chicago, a full offseason of Fields getting first team work in camps and building chemistry with all of his receivers should help him quite a bit.

The Bears also brought in a GM that is a former offensive lineman and an offensive coordinator that coached the back-to-back MVP in Green Bay the last two seasons.

All signs point to Fields having a breakout in 2022 and being worth far more than his current dynasty value.

While Fields is still a young QB and valued as such by many, some owners could be discouraged by his rookie year and wish to get out before his value collapses. A bad 2022 would be catastrophic to Fields value. But if you are looking for a young QB to build on for the future of your team, Fields is a great bet.

Don’t let the base numbers in 2021 fool you. Fields is ready to become a top 10 staple at QB in dynasty.