Isiah Pacheco has been lighting up Twitter timelines. Is the hype warranted? @DanT_NFL is here to give you the details on this late-round sleeper. 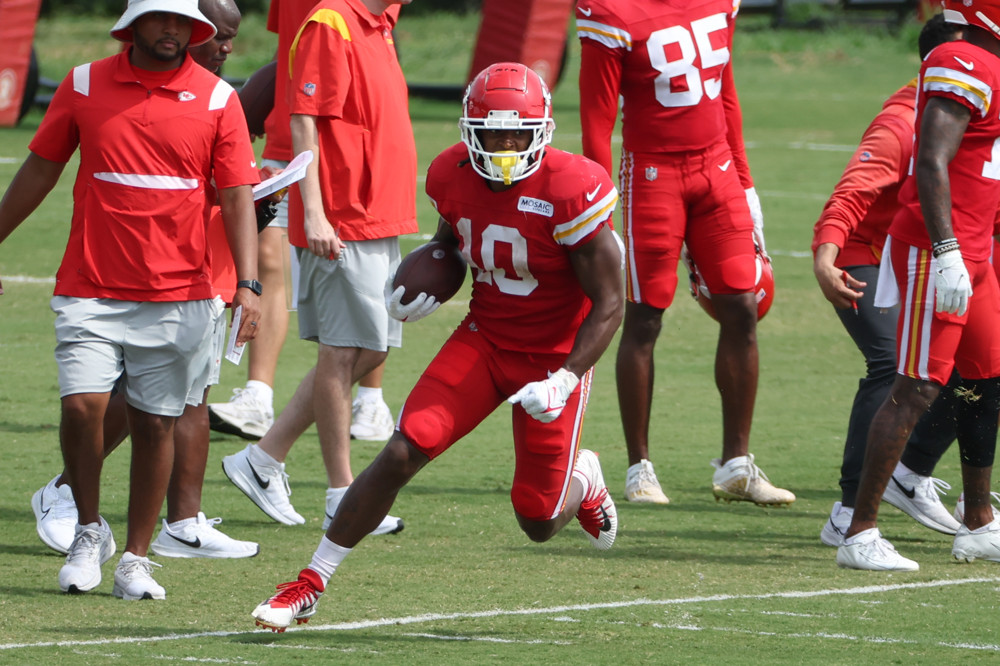 During training camp, one player has a hype train that seems to be off the rails every summer. It is typically a running back that has received minimal draft capital yet is “running with the ones” and may have a chance to earn a significant workload and become fantasy relevant. Fantasy managers always relish these hits, which include players such as Phillip Lindsay, James Robinson, and, most recently, Elijah Mitchell. They often forget the misses like Darwin Thompson and Keshaun Vaughn. Isiah Pacheco is our next great hype train, but is it warranted? Let’s take a deep look and figure out if Pacheco will be a league winner or just an easy flip for draft picks.

Pacheco comes from Vineland, New Jersey, just 25 miles from Jonathan Taylor’s hometown of Salem. According to 247Sports, he was a 3-star recruit and ranked as the 30th ranked running back in the nation in 2018. He had offers from Pittsburgh, Connecticut, Maryland, Temple, Toledo, and Syracuse. Isiah ultimately decided to stay in his home state and attend the University of Rutgers.

Pacheco was often limited by what is an inept Rutgers offense. Despite this, Pacheco was the epitome of health and only missed two games during his four-year college career. Throughout his career, Pacheco amassed over 2,600 yards from scrimmage in four years. One of those years was even the COVID-shortened 2020 season. Those yards came on a team that only won eleven games over that span.

Pacheco entered the pre-draft process with much to prove. Rutgers is a member of the Big Ten, so NFL scouts were at his game, but it is pretty hard to discern the skills of a running back who gets little to no help from his offensive line. At the combine, Pacheco showed up, clocking a 4.37 40-yard dash. His 40 time was the second best in this class. New England Patriots running back Pierre Strong matched Pacheco’s fast time.

Pacheco added a little flair to the process if the 40 time wasn’t enough to wow scouts at the combine. He was great in interviews and chose some flashy outfits for any of his media appearances. He was genuinely embracing the underdog that he was in Indianapolis.

The Kansas City Chiefs used the 30th pick in the seventh round of the NFL draft to select Pacheco. He very nearly went undrafted, which is a preference for some players. Being undrafted means they get to choose their destination. I am sure Pacheco was jubilated to have Kansas City selected for him.

After final roster cuts, the Kansas City backfield comprises Clyde Edwards-Helaire, Jerick McKinnon, Ronald Jones, and Pacheco. Edwards-Helaire is a former first-round who has been lackluster at best through his two-year career. There have been rumblings over the summer that his shortcomings in 2021 were because of a gallbladder surgery shortly before the season began. Unfortunately for him, that does not explain his 2020 season.

Ronald Jones is a former second-rounder who was most recently rumored to be cut prior to the final 53-man roster. He wasn’t able to stick around on a Super Bowl-winning Tampa Bay team and will have a questionable amount of work with the Chiefs. The other competition comes from a 30-year-old McKinnon who may have lost his explosiveness. This job is Pacheco’s for the taking.

Camp hype is one of the many things that drives dynasty fantasy football throughout the summer. Every fantasy manager dreams of landing that late-round dart throw rookie that will step into their starting lineup in Week One. It is the driving force between third and fourth-round rookie picks having any value. Pacheco is already proving that the late-round juice has been worth the squeeze. Many managers have been flipping him for 2023 2nds, but the real value lies in holding him. There is a very real possibility he can take this job and provide weekly RB2-type numbers. You can then decide if you would like to hold him or flip him for a 2023 first-round pick.