Week 6 of the NFL is here and Evan Brown is sharing some flex advice for those tricky bye-week dynasty start/sit decisions. 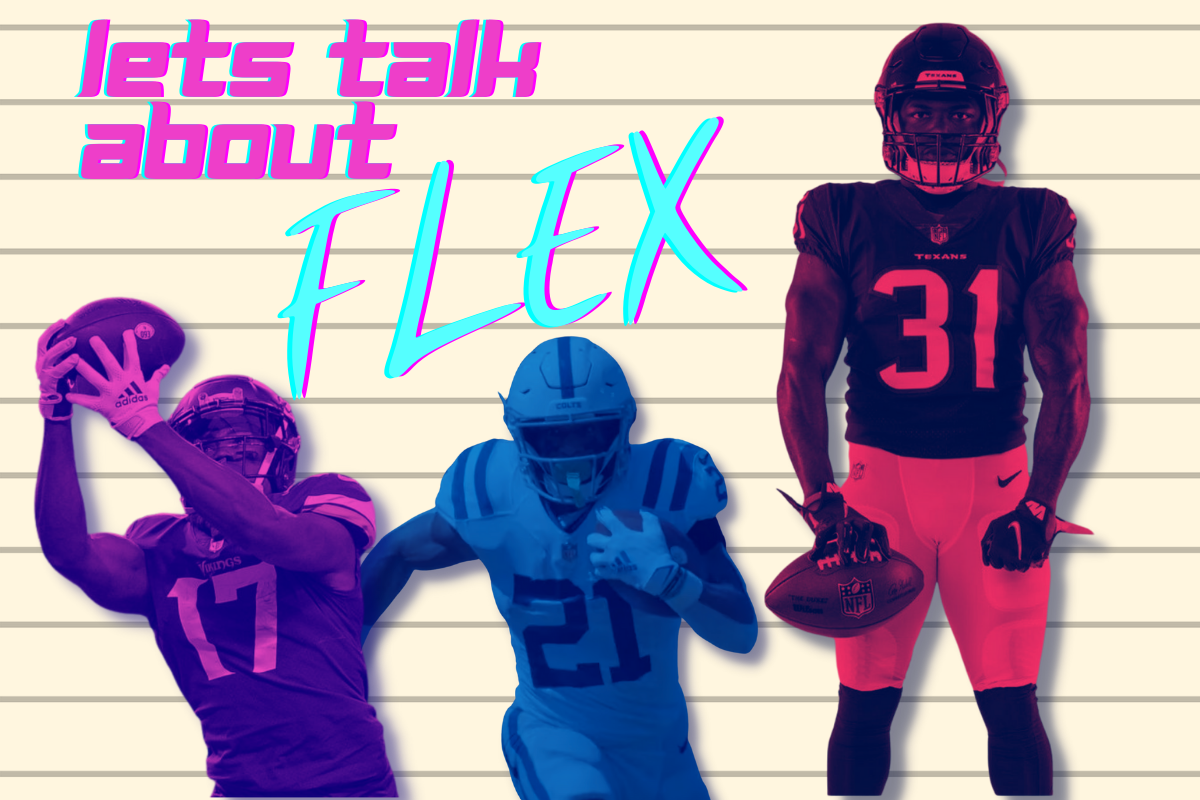 This season has been such a rollercoaster of emotions that I completely forgot about bye-weeks! As if things weren’t chaotic enough, now we have to do without four teams worth of fantasy-relevant players to choose from! Do not fear good citizens, I am here to keep you right for week 6!

Week 5 was a smash for the picks and I hit on three of the four players I recommended. Let’s do a quick recap!

Fortune favors the bold they say and I enjoyed the rewards of a delicious biscuit hot from the ovens of risk in Week 5. Pickens overcame a devastating blowout to post a very respectable 14.3 points as the WR21 on the week. To be fair, Kenny Pickett threw the ball 52 times so there was a pretty sizeable pie to be shared. Pickens had 6 receptions on 8 targets for 83 yards.

D-squared put in a completely serviceable WR26 performance against the Cincinnati Bengals in Week 5. Devin recorded 5 receptions on 7 targets for 54 yards but sadly no touchdowns. He was really close to a much bigger game if Lamar had not struggled to find the slippery receiver on a couple of deep shots. Duvernay had the second-most targets behind only Mark Andrews and actually posted a higher receiving and offensive PFF grade than the tight end. Keep an eye on Rashod Bateman’s availability for Sunday as Devin might once again be a flex-worthy option.

At this stage, you may as well call me butter, cause I was on a roll! Mostert wasn’t just a solid start he was a smash play in Week 5! Out snapping Chase Edmonds 69% (NOICE) to a measly 15% he posted an RB15 week with 18 rush attempts for 113 yards and a score! What made this performance even more impressive is that the Dolphins were in a negative game script basically the entire game and ended up being blown out by the NY Jets 40-17.

In classic Mostert fashion, he followed this incredible performance up by immediately showing up on the injury report mid-week. Keep an eye on this if you are planning on using Raheem in your lineups against the Vikings.

Sadly it was not a perfect Week 5 for me. I was let down by Quadzilla himself! To be completely honest, the entire Green Bay team was a complete surprise to me. The Packers losing to the Giants led by a hobbled Danny Dimes was not on my Week 5 bingo card!

I did not expect them to only run the ball a combined 20 times. I most certainly did not expect Dillon to only get 6 rush attempts for 34 yards and finish as RB62! Apologies to anyone who started him on my recommendation, I am truly sorry!

Rondale Moore has finally recovered from that early-season hamstring strain. In fact, he is starting to play a significant role in the struggling Cardinals’ offense. Moore had a very efficient 7 receptions on  8 targets for 68 yards in Week 5. He even had 2 rushing opportunities with the struggling running back room under siege. Rondale saw over 90% of the snaps and ran the same amount of routes as Zach Ertz on Sunday.

The Arizona Cardinals face the Seattle Seahawks in Week 6. The Seahawks are the magic salve that heals all the offensive woes of the opposing team. Seattle is 31st in defensive DVOA and gives up the most yards per game in the entire NFL (430). Add in a juicy 51.5 point over/under and I am all aboard the Rondale Moore hype train in Week 6!!!

Pierce has been quietly having a growing impact on the beleaguered Indy receiving corp. In Week 5, against the hapless Denver Broncos, Pierce led the Colts with 8 receptions on 9 targets for 81 yards. I still see it as Michael Pittman Jr being the undisputed WR1. At the same time, it is easy to see that Pierce is forming a solid connection with Matt Ryan.

Ashton Dulin is on Injured Reserve. Jonathan Taylor’s status for Week 6 is unknown. Nyheim Hines is still working his way through the concussion protocol. Jacksonville is a tough defense this year and they embarrassed the Colts in Week 2. Indy will have to pass the ball if they want to stay competitive and Pierce is heating up.

I know I know, I am pressing my luck with this one. What can I say?! I have always had a soft spot in my heart for Slayton and it was awesome to see him ball out in London! On top of that, he received PFF’s third highest Offensive Grade and fourth highest Receiving Grade in week 5 for WRs!!!

Now, there is a chance that Wan’Dale Robinson can make it on the field this week. To be honest, the Giants need every weapon they can get! I understand if you can’t ride with me on this one. Personally, I am sliding Slayton into my lineups this week and waiting for some more G-Men magic! (Baltimore HAS given up the most passing yards per game this season, just saying!)

Sadly, I have saved the bad news for last. I don’t think you can flex Cam the Ram. Is it the struggling offensive line (25th in Rush DVOA)? I wonder if it is some lingering side effects of recovering from such a gruesome injury. I honestly don’t know. What I do know is, that out of 66 RBs with at least 15 carries through five weeks of NFL action, Akers ranks 55th in Offensive Grade and Run Grade via PFF. (Yuck!) He is currently 51st in Yards After Contact Per Attempt (YCO/A) and 54th in Elusive Rating.

In plain fantasy football terms, he is RB57 on the season, averaging 4.6 fantasy points per game. Yes, the Panthers sacked Matt Rhule and their defensive coordinator. I get that it is a home game for the Rams. I am still benching Akers until I see something from him that makes me change my mind.

There we have it, folks, a few spicy predictions to set you up for your game Week 6 matchups! I hope you found that useful and I hope you get some massive W’s this week! If you want to chat about anything I have covered you can find me on Twitter @FFEvanlution!

Catch you here next week!