@Glosser13 brings you the final edition of Man Coverage for the 2021 season. Good luck this week in your dynasty championship games #IDPNerds 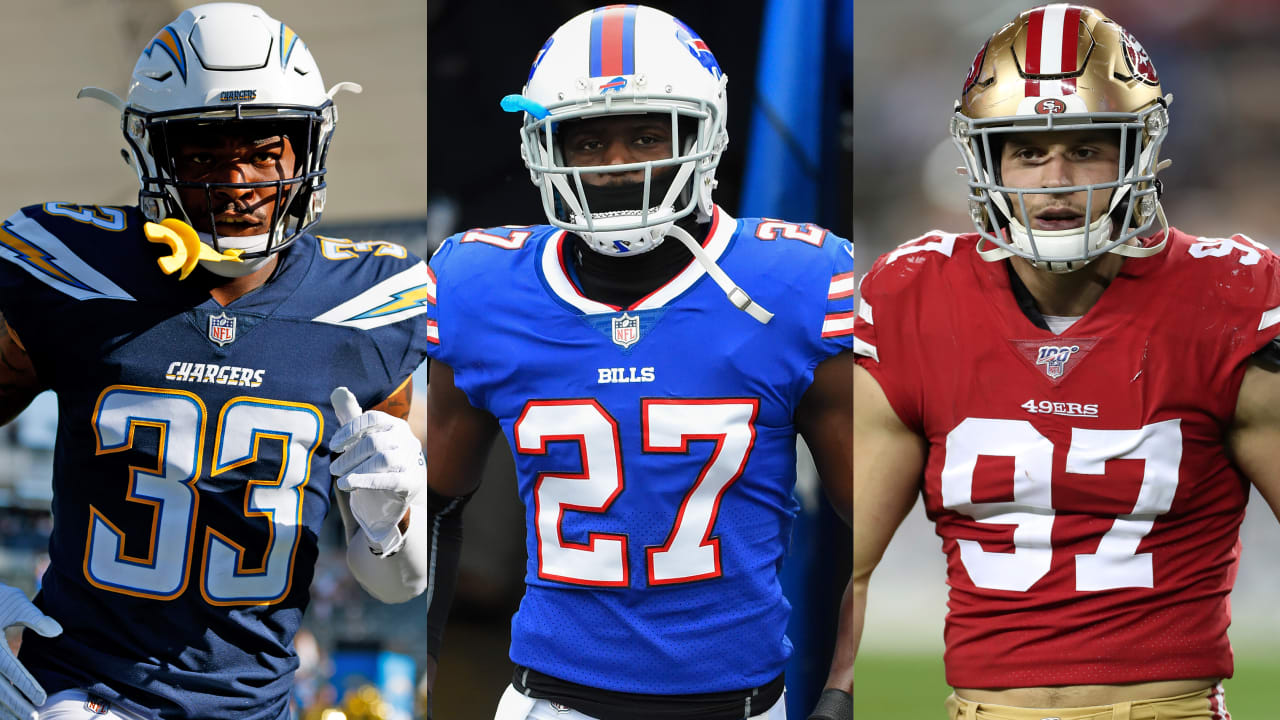 Welcome back IDP nerds. Chances are, if you’re still with me, then you’ve made it to your league championship. First, congratulations are in order. You’ve made it through one of the more difficult seasons, especially in the postseason with injuries and COVID protocols. The second round of the playoffs was another successful showing with 66.70% accuracy bringing the season total to 67.49%. Let’s take a look into the championship matchups in Week 17.

Although A.J. Terrell fell short of double-digit fantasy points last week, he finished with nine points. The Falcons DB did finish with six tackles, his most since Week 12. This week he will draw the matchup of Stefon Diggs, who has been targeted (9.4), the 10th most of any WR in the NFL. The Buffalo offense gave up four tackles to five different DBs last week against the Patriots. This week, A.J. Terrell is a solid start among the craziness of COVID running wild in the NFL.

The New York Giants pass rushers draw a good matchup this week against the Chicago Bears, who have allowed the most sacks (49) this season. Azeez Ojulari has played well over his past five games, only failing to post double-digit fantasy points once. The former Georgia Bulldog has played at least 39 snaps in each of his past 11 games. I would hesitate to start him in an LB spot if you have equal or better options, but he can provide a solid week if you’re desperate. He should be a top 24 DL this week if he has DL eligibility.

Tyrann Mathieu is one of the best defensive players in the NFL. Very few will debate that. Over the past few weeks, he has been ineffective for IDP managers scoring just nine fantasy points over his last 123 snaps. The Kansas City Chiefs are gearing up for another deep playoff run, and Mathieu seems uninterested in putting himself in any position to get himself hurt. In a must-win matchup, I don’t feel the ‘honey badger’ tackle floor is safe enough to put him in my starting lineup this week.

Jevon Holland has recorded ten straight double-digit fantasy performances since taking over as the full-time starter in Week 5. Holland has been a huge difference-maker for the Miami Dolphins defense. The former Oregon DB is averaging over 11 fantasy points per game this season. This week, he should be in line for another big game against the Titans offense. The Titans allow the 4th most sacks (45) this season.

When news broke Christmas day that Darius Leonard would not play, E.J. Speed was one of the week’s best pickups. All signs point to Leonard being available for Sunday’s matchup with the Raiders. E.J. Speed was amazing in Leonard’s absence, recording nine tackles, five on the opening drive. The Colts defense is built around Leonard and Bobby Okereke flying around tackling anything that moves. The return of Leonard will limit the opportunities for Speed like it has all year. He is a sit unless something happens and Leonard is forced to sit out another game.

Kyle Dugger is turning in a breakout season in his second year with the Patriots. Dugger currently is the DB13 despite only playing 14 games this season. He’s averaging just under 17 points per game. The New England DB turned in his first 10+ point game since returning from the COVID list. The Patriots’ defense is coming off back-to-back below-average performances and will need their young safety to set the tone early against a bad Jacksonville Jaguars team. Dugger is averaging 5.8 tackles per game and should reward dynasty managers who are brave enough to put him in their lineups this week.

Jordan Whitehead has been standing out for a depleted Tampa Bay defense over the last month of the season. Whitehead is averaging 19.3 fantasy points per game in his previous three games. Whitehead will be asked to help carry the load again with multiple starters down. He is offering one of the safest tackle floors right now among safeties, and IDP managers should feel confident he will keep it up in a plus matchup with the New York Jets.

This one is more for my underdog teams facing an uphill battle in their championship game this week. I’ve mentioned previously that sometimes you have to take some risks when you are the big underdog in a matchup. Well, here we go. Jeremy Reaves has led the Washington Football Team in tackles each of the past two weeks. One of those games was a 12 tackle performance against the Philadelphia Eagles, who the WFT will play for the second time in three weeks. Reaves plays a huge role in the secondary with Landon Collins out and should continue his high volume of tackles in Week 17. There’s a strong chance Reaves is still on waivers in most of your leagues and can be a nice boost to your teams this week.

This is a plus matchup for the Los Angeles Rams defense this week. Leonard Floyd is my pick for the biggest week of the Rams pass rushers. Floyd has been remarkably consistent this season, with only four games of his 15 played under 10 fantasy points. The former Georgia Bulldog has 14 tackles, one sack, and one interception in his last three games. The Rams will face off against the Baltimore Ravens, who have allowed a league-worst 49 sacks. If you have a Rams pass rusher, this is the perfect matchup for championship week.

Bradley Chubb is coming off his best game of the season with 18 points on 45 snaps against the Raiders in week 16. The only way I could trust Chubb to have a repeat performance is if you can slot him in as DL rather than an LB. The former North Carolina State EDGE rusher hasn’t fully recovered from the injuries that have cost him most of the past two seasons. Chubb has just 7 pressures in six games this season and will face the Chargers offensive line, who allow the 9th fewest sacks (28) on the season.

Christian Kirksey returned from the COVID list last week to record three tackles on just 21 snaps. The Texans won’t be afforded the opportunity to slowly work him back this week as the defense is still dealing with multiple players out due to COVID. The veteran LB is averaging just under 7 tackles per game and has been a key player for the Texans defense this season. The Houston LB group has been very consistent, and they will be facing one of the league’s best running offenses in Week 17. Christian Kirksey is on pace for his best fantasy finish since the 2017 season.

This one isn’t to single out Keanu Neal as much as it is a point not to start any Cowboys LB not named Micah Parsons. The split snaps between Keanu Neal and Leighton Vander-Esch were already frustrating enough for IDP managers, and now Donovan Wilson has returned from IR to steal some of those snaps as well. The Dallas defense has been fun to watch this year, but there hasn’t been a consistent performer outside of Micah Parsons and Trevon Diggs. This is a situation I would avoid when you need guaranteed fantasy points.

Chauncey Gardner-Johnson has been very productive over the past two weeks. The former Florida Gator has 26 fantasy points over his last two games, collecting 7 tackles in each game. Carolina allowed both starting safeties from Tampa Bay to record 7 tackles last week. Gardner-Johnson has been effective despite not making impact plays. I like his chances to record a third straight double-digit performance in Week 17.

Charles Harris dominated in the first round of the playoffs, rewarding many IDP managers before coming back to earth last week with a 6 point performance. Dynasty managers can’t expect Harris to run in a 12 tackle, 1.5 sack performance every week. In his last game of the season, he draws a very good matchup with a Seattle Seahawks offensive line that has allowed the 5th most sacks (44) this season. The Detroit Lions pass rusher has 7.5 sacks this season on 33 pressures. He should have plenty of opportunities to continue his breakout season this weekend.

The Minnesota Vikings LB group has been fairly consistent for IDP managers over the past few seasons. Anthony Barr isn’t the most popular name among linebackers in dynasty fantasy football, but he’s been very good over his past five games. Barr has averaged 16.82 fantasy points per game during that span while also averaging 7.6 tackles per game. The former UCLA Bruin has fared well against the Green Bay Packers scoring double-digit fantasy points in his last four games against them. Anthony Barr has a strong chance to continue his stellar play against Green Bay and extend his double-digit points streak to six games.

IDP managers getting Anthony Walker back for the last two weeks of the fantasy playoffs has been a blessing. Walker came back to record 9 tackles in just 43 snaps played last week. The former Indianapolis Colts LB has been highly productive as a tackler this season, with 97 tackles in 11 games for an average of 8.8 per game. The Browns LB collected 8 tackles in his first matchup against the Steelers and will get another shot to record a big tackle game against them this week. Walker also is allowed to play on Monday Night Football this week, giving dynasty managers the extra insurance if they need a potential double-digit scorer in a close matchup.

That will do it for IDP nerds this week. I’m pumped for those of you who have the chance to compete for a dynasty championship this week. I wish you the best of luck and hope this week’s column can help you make those lineup decisions a bit less painful. The entire dynasty nerds staff has worked tirelessly to make sure we have been available all season to help make things easier on you. I speak for all of us when I say thank you for your support and get ready following another off-season of weekly content to help you prepare for another successful season.