Last year was one to forget for New York Giants fans. How will new hire Brian Daboll affect the Giants from a fantasy aspect? @noahrwright evaluates which players will benefit from an offensive resurgence. 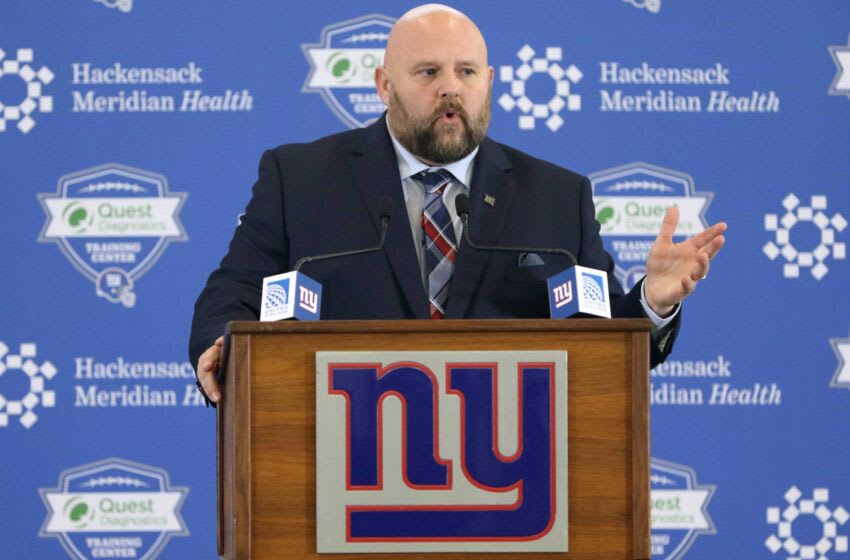 Coming off a year with the Buffalo Bills in which they lost a playoff thriller to the Chiefs, Brian Daboll has decided to take his first-ever head coaching position in the NFL. A seasoned coach over the last two decades, Daboll has been able to work with many masterminds at both the college and professional levels.

From 2013 to 2016, he worked under Bill Belichick as the tight ends coach for the New England Patriots. In 2017, he accepted a position with Alabama as their offensive coordinator, ending in a National Championship. After only one year, he moved to an OC position with the Bills. Now, he has his work cut out for him with a recently flailing Giants team. How will his offensive prowess boost the fantasy-relevant players in New York?

As of right now, Jones will be the starting quarterback for the New York Giants in the 2022 season. There have been rumors about Russell Wilson possibly finding a potential landing spot in the Giants, but that is currently speculation. The Giants have many other holes to fill this off-season and not much cap space to do so.

Daboll, alongside Ken Dorsey, was able to take a project in Josh Allen and turn him into a bonafide gun-slinger who is now a consensus top-three dynasty QB. The Bills ranked third in points per game in the 2021 season and first in points per play. Daboll enjoys a high passing offense as Buffalo was seventh in both passes and passing yards per game. The addition of the new OC, Mike Kafka, will also be helpful for Danny Dimes. Kafka spent three seasons in Kansas City as the QB coach for Patrick Mahomes. As long as his receivers can stay healthy and on the field, this should bode well for Jones.

Here’s a name that has caused fantasy managers heartaches over the past two seasons. Barkley has struggled to regain the same status he once had after an incredible rookie season that vaulted him to RB1 in PPR formats. The last two seasons have been riddled with injuries, poor coaching/offensive line, and honestly not great play from Barkley himself. However, an offense run by Daboll and Kafka could be just what the former star RB needs before a crucial second contract-deciding year.

While Daboll is known for his team’s passing ability, the run game is nothing to scoff at. The Bills finished sixth in rushing yards per game and rushing TDs per game this past season. Granted, they had one of the best rushing QBs in the league, but Daboll was able to complete this with no clear starting RB. Between hopefully a better line built through the draft, an improved passing game (can’t be much worse than 31st in passing yards per game), and a healthy season, Barkley should be able to prove that he’s still in the RB1 range.

Toney did not have the first-round pick production that the Giants were hoping he would have with a rookie season full of injuries and behavioral issues at times. In the ten games that he played, Toney had 39 receptions for 420 yards. The young receiver had many ups and downs, but many fixated on his break-out game versus the Cowboys, where he went for ten catches on 13 targets and 189 yards. The only problem? He was ejected for punching Cowboys’ safety Damonte Kazee late.

Even with all of the question marks behind Toney, I believe that the hiring of Daboll will create some stability over the next few years, which will help the former first-round selection. The passing offense will receive a significant boost, and Toney has the athleticism to break off major plays at any moment. So long as he can stay on the field, he will benefit from the new hiring.

Last offseason, Golladay signed a five-year, $72 million contract with the Giants after his season was cut short with a hip-flexor injury. Before that, he amassed back-to-back 1,000+ yard seasons with the Lions in 2018 and 2019. This may have seemed to be an overpay considering their salary cap situation, but the front office showed they were willing to get a weapon for their young QB. Unfortunately, it did not work quite as well as they imagined.

Golladay started in 14 games during the 2021 season and only had 37 receptions for 521 yards. His yards per reception (14.1) were the lowest of his five-year career. Things were not clicking between him and Jones. It also did not help that the Giants were 29th in the league in passing yards per completion.

As with Toney, a new situation with a coach that values throwing the ball will benefit Golladay. He’s proven that he can be in the low WR1/high WR2 tier before, and with a competent play-caller, perhaps he can show it once again. I do not see Jones’ play as a massive issue as I believe that Daboll will either bring out his strengths or toss him to the side. Either way, Golladay will be in a better position than last year.

This offseason so far for the Giants has been much improved than in previous years, and the hiring of Daboll isn’t any different. He’s proven that he can use all sorts of different players to accomplish a successful offense (Gabe Davis playoff game, running back by committee). If the front office can fix some holes in the offensive line, Daboll should find ways to bring the air offense alive for Golladay and Toney and open some holes for Saquon on the ground.