Next Man Up: Regular Season Week 2

Week 1 injuries have been tallied. @ReflipeWTheNews brings the Next Man Up. 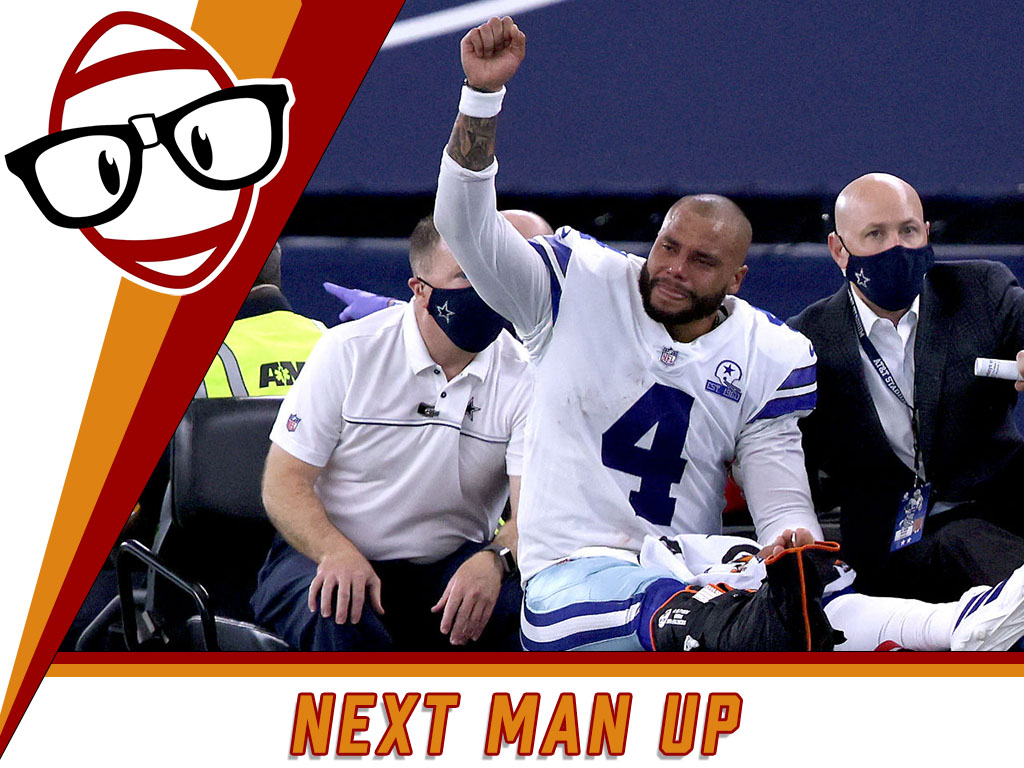 Each and every week, players across the NFL suffer injuries. This weekly article will explore the injuries that affect your dynasty squads. We will briefly discuss the injured players and the players who stand to benefit or suffer as a result. To make them easier to follow, we will break down the injuries by division. Without further ado, let us examine the Regular-Season Week 1 injuries and the next men up.

New England quarterback Mac Jones suffered some form of a back injury. The injury was not serious enough to take him out of the game on Sunday. However, it was concerning enough to send the sophomore signal caller for additional testing following the game. His loss could be a blow to Superflex teams, where Jones is a fine QB2. If forced to miss any game action due to the injury, the Patriots would turn to 36-year-old backup Brian Hoyer. The veteran would be a downgrade for the Patriot’s skill players across the board and would be usable only in the deepest Superflex formats. Jones’ X-rays were negative, so hopefully, he will be good to go on Sunday, but this is a situation to monitor as the week progresses.

New England running back Ty Montgomery was able to make it back from a scary-looking pre-season injury only to injure his knee in Week 1. The injury is significant enough that the Patriots have placed the receiving down specialist on IR. His absence from the lineup will create an opportunity for Damien Harris and Rhamondre Stevenson. The latter of which stands as the biggest beneficiary of a Montgomery absence. Rookie Pierre Strong could also see some action, but Bill Belichick is notoriously fickle when it comes to his running backs, so it would be advisable to stick with the top two options in your lineups.

The AFC South emerged from Week 1 with no significant losses on the offensive end of the ball.

Analysis on his injury from our panel of doctors: https://t.co/IdKO5efizZ pic.twitter.com/a2QuT6OLOI

Pittsburgh running back Najee Harris suffered a foot injury in his team’s Week 1 victory. This one did not look good at first sight. Harris appeared to have his foot pinned beneath him during a tackle and was writhing in pain after the injury. Despite the initial optics, team officials have indicated the injury is nothing major. Their assurances aside, it seems likely that Harris will either miss some time or will be on more of a pitch count for the immediate future. Pittsburgh would likely lean on a combination of Jaylen Warren and Benny Snell if the second-year star were to miss time. They may also attempt to open the passing game up for Mitchell Trubisky and company.

Cincinnati WR Tee Higgins was knocked from his team’s disappointing Week 1 loss with a concussion. The talented former Clemson Tiger must pass the league’s mandated concussion protocol before returning to game action. If he were forced to miss game action, the Bengals would funnel additional targets to their slot wide receiver Tyler Boyd and tight end Hayden Hurst. Joe Burrow and company could also look to involve backup wide receivers Mike Thomas and Morgan Stanley.

#KeenanAllen pulls up with left mud hamstring injury. Unlikely to return for @chargers. TBD how many games he misses depending on severity. pic.twitter.com/PDrDsEnH7I

L.A. Chargers wide receiver Keenan Allen suffered a hamstring injury in his team’s Week 1 victory. The always reliable technician’s departure leaves a big hole in the Charger’s passing game. With Justin Herbert and company set for a quick turnaround on Thursday night against the Chiefs, it may prove difficult for Allen to gain clearance in time. If Allen does miss game time, the Chargers would elevate promising sophomore wide receiver Josh Palmer and upping the playing time of DeAndre Carter and Jaylen Guyton. Carter had a big Week 1 after Allen’s departure, but I would bet that Palmer is the real beneficiary of any missed game action for Keenan Allen. Running back Austin Ekeler could also soak up additional targets in the passing game.

Las Vegas running back Brandon Bolden was forced from his team’s Week 1 loss with a hamstring injury. Bolden should be far from your fantasy lineups at this point in his career. However, before leaving the game, the former Patriot was doing what he does best, cap the fantasy production of the more meaningful team running backs. Bolden’s potential absence should be a good thing for starter Josh Jacobs who should see some additional snaps in his wake. It could also mean more reps for rookie Zamir White and former Nebraska star Ameer Abdullah. Of this mix, Jacobs is the only one I would feel safe playing.

Dallas quarterback Dak Prescott was knocked from his team’s Week 1 defeat with a hand injury. The more things change, the more they stay the same. Dallas is again forced to turn to a backup while their multi-million dollar man is out with an injury. Team officials have announced the injury as a broken hand, and Prescott has already undergone successful surgery to repair the broken bone and will miss 6-8 weeks. This puts all eyes on Cooper Rush as the current starter on the roster. Owner Jerry Jones has already stated that all options regarding the quarterback position are being evaluated. There are some potential trade and free agent targets the Cowboys could attempt to acquire.

Until then, you would be wise to downgrade the Dallas passing assets and give a slight bump to Ezekiel Elliott and Tony Pollard. McCarthy and company will surely attempt to run the ball to protect their quarterback. Rush is not a recommended quarterback play in any but the deepest of 2QB leagues.

New York rookie wide receiver Wan’Dale Robinson was forced from his team’s Week 1 contest with a knee injury. Team officials have been tight-lipped as to the severity of the injury thus far, calling the rookie day-to-day. Despite the apparent optimism of the coaching staff, Robinson’s ailment was serious enough that he underwent both an x-ray and MRI. Were he to miss time, expect the Giants to turn back to talented second-year WR Kadarious Toney, who played shockingly little after Wan’Dale’s exit. Kenny Golladay, Sterling Shepard, and Richie James should carry the load at wide receiver for whatever length of time the rookie is out.

Chris Godwin is out for the game with a hamstring injury pic.twitter.com/lUoDaott7K

Tampa Bay wide receiver Chris Godwin exited his team’s Week 1 victory with a hamstring injury. This is highly unfortunate as one of the better wide receivers in the league is again dealing with injury after last year’s torn ACL. Initial reports were that Godwin would likely miss several games with a fairly significant hamstring injury. However, Head Coach Todd Bowles shot down those reports and suggested the injury was not as severe as initially believed.

Reading between the lines, Godwin will likely miss a game or two while the team brings him back up to speed. In his absence, the Buccaneers will turn to future Hall-of-Famers Julio Jones and Mike Evans along with Russell Gage. Tampa is deep at the wide receiver position and should have enough firepower to continue without missing a beat. Look for Evans and Jones to put up nice numbers, with Gage being serviceable as a flex in this high-volume passing attack.

Atlanta running back Damien Williams was forced from Week 1 with a rib injury. According to Williams’ Twitter account, the injury is minor, and he has no broken ribs. Atlanta will lean more heavily on starter and offensive weapon Cordarrelle Patterson in the coming weeks if Williams misses time. There is also a chance that rookie Tyler Allgeier could also see some snaps in a complimentary role.

—Force from outside will stress MCL
—Meniscus could be in play because foot was planted and rotated
—Seems likely ACL is intact but will need to rule out tear with MRI
pic.twitter.com/A6wMWmWacf

San Francisco running back Elijah Mitchell sustained a fairly significant knee injury in his team’s shocking Week 1 loss. It was revealed after the game that the talented second-year RB had suffered a sprained MCL. The ailment will not require surgery but will keep him out for several weeks. Reports range anywhere from 6-8 games. In his absence, the team will turn to Jeff Wilson Jr. and a pair of rookies, Tyrion Davis-Price and Jordan Mason. Although, the most likely outcome will be an increased workload for offensive weapon Deebo Samuel. The All-Pro wide receiver will surely spend additional snaps in the backfield both as a runner and receiver, capping the viability of any of the backup running backs.

Los Angeles running back Kyren Williams suffered a high ankle sprain in his team’s Week 1 defeat. The rookie was pretty far off the fantasy radar before sustaining this injury. His absence would only further solidify the one-two punch of Darrell Henderson and Cam Akers. If you believe in Williams’ long-term viability, now may be the best chance to put in an offer on the former Notre Dame star as he will miss 6-8 weeks recovering.

Thank you for reading this article! Please be sure to join the #Nerdherd so you don’t miss out on any of the amazing things we offer @Dynastynerds.com. Use my promo code DynastyHolliday for a 15% off discount. You will get rankings, extra podcasts, and access to our rookie film room. For just a couple of bucks more, you can get access to our revolutionary DynastyGM tool. So much for so little. Why miss out on all the fun? Also, you absolutely must check out our new mock draft tool. Find it in your Apple & Android app stores. Follow me @ReflipeWThenuz for more dynasty content and other musings.