Next Man Up: Regular Season Week 8

Week 7 saw some serious injuries across the league. @ReflipeWThenuz is here to help you break them down and highlight the next men up. 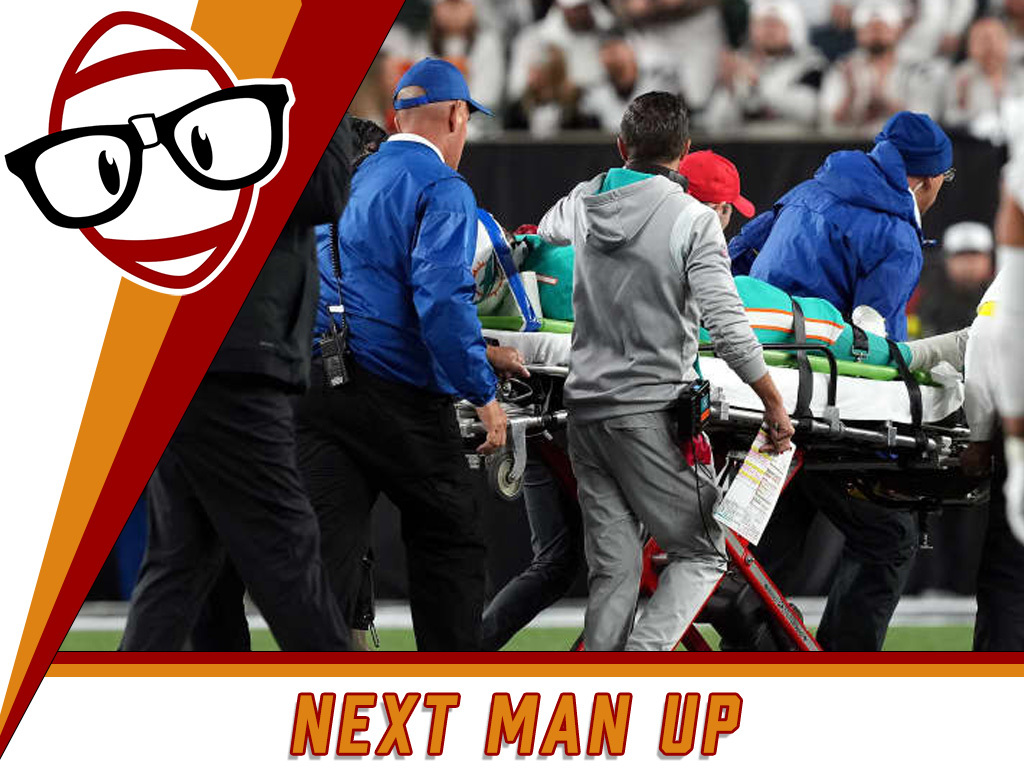 Each and every week, players across the NFL suffer injuries. This weekly article will explore the injuries that affect your dynasty squads. We will briefly discuss the injured players themselves and the players who stand to benefit or suffer. To make them easier to follow, we will break down the injuries by division. Without further ado, let us examine the Regular Season Week 7 injuries and the next men up.

Breece Hall has been ruled out after this injury. pic.twitter.com/7FYykvNPvD

New York running back Breece Hall was forced from his team’s Week 7 contest with a knee injury. Subsequent testing revealed that the star rookie has a torn ACL. He will miss the rest of the regular season. In his place, the Jets will turn to second-year back Michael Carter. New York further bolstered their backfield with a trade with the Jaguars for James Robinson. The former undrafted star will take some time to get up to speed in the New York system, so this will be a situation to monitor moving forward. In all likelihood, we will eventually see a committee down the stretch with both rushers getting their looks. Now is an excellent time to put in offers for Breece Hall.

New York wide receiver Corey Davis suffered a knee injury in his team’s Week 7 victory. Subsequent testing revealed the injury to be an MCL sprain. These sprains do not require surgery but can require time off to heal. Head coach Robert Saleh believes it to be a mild sprain. He even suggested playing in Week 8 was a possibility. If he does sit, the Jets will turn to a combination of Elijah Moore and Denzel Mims. That is as long as Moore is on the roster.

Rookie QB Malik Willis is in

Tennessee quarterback Ryan Tannehill suffered a minor knee injury in his team’s Week 7 victory. He was able to come back into the game after a brief exit. He appears to have avoided a long-term injury. However, monitoring his practice reps throughout the week would be wise. If, for some reason, he suffers complications, the Titans would turn to rookie quarterback Malik Willis in his place.

Houston wide receiver Nico Collins suffered a groin injury in his team’s Week 7 loss. The talented sophomore seemed to be in the process of establishing himself as the no.1 before the injury. Houston has already elevated players from the practice squad, indicating they expect him to miss some time. In his place, the Texans will rely on Brandin Cooks, Phillip Dorsett, and Chris Moore to hold down the fort.

Cincinnati wide receiver Jamar Chase briefly exited his team’s Week 7 victory with what appeared to be a leg injury. The star sophomore was able to later return to the game. He seems to have avoided a true injury on this one. It has the looks of a slight hamstring strain. Keep an eye on his practice reps throughout the week. If for some unforeseen reason, he cannot go, the Bengals would rely heavily on Tee Higgins and Tyler Boyd. They would also give Mike Thomas, Morgan Stanley, and Trent Taylor playing time in his stead.

Classic high ankle sprain mechanism for Mike Williams. Week 8 bye comes at the perfect time, but these usually take multiple weeks to heal then another couple of weeks to return to peak performance. MRI tomorrow to determine extent of injury pic.twitter.com/iHFTii2QvA

Los Angeles wide receiver Mike Williams suffered a painful ankle injury in his team’s Week 7 loss. It was later revealed the former Clemson star sustained a high ankle sprain. Thankfully for Williams and the Chargers, they have a bye week on tap next week. However, this one had the look of a multi-week absence injury. I wouldn’t be surprised to see Williams miss a game or two on the backside of the bye week. If that happens, the Chargers would rely heavily on Keenan Allen and Josh Palmer. DeAndre Carter would supplement them. Tight end Gerald Everett would also soak up some additional looks in the passing game.

Denver running back Mike Boone sustained an ankle injury in his team’s Week 7 loss. Denver went out and claimed Marlon Mack on their practice squad early in the week. This indicates they expect Boone to miss some time. The Broncos are already dealing with the loss of starter Javonte Williams. This injury further depletes the Bronco’s depth. However, it should clear things up and lead to a two-man committee between Melvin Gordon and Latavius Murray. Both players could offer some flex appeal, with Gordon taking the passing work and Murray handling goal-line touches.

Daniel Bellinger traveling with Giants after being taken to hospital for eye injury. https://t.co/oQNSUKmZpy

New York tight end Daniel Bellinger suffered a painful eye injury in his team’s Week 7 victory. The rookie tight end has impressively established himself as the starter. This is a different type of injury. He will undergo surgery to repair a fractured eye socket suffered when he was poked in the eye. This injury is going to take some time to heal. The Giants will turn to Chris Myarik and Tanner Hudson in his place. Neither player is an appealing start in anything but the deepest of formats.

Carolina running back Chuba Hubbard exited his team’s surprise Week 7 victory with an ankle injury. Hubbard and D’Onta Foreman paced the Panthers on their way to a resounding victory. After the game, team officials indicated Hubbard could have gone back in if necessary. Keep an eye out for news about his practice reps throughout the week. If he does miss any game action, Carolina will use Raheem Blackshear to spell D’Onta Foreman, who would be a plug-and-play RB2.

Detroit wide receiver Amon-Ra St. Brown suffered what was believed to be a concussion in his team’s Week 7 loss. He was removed from the game due to the league’s new concussion policy. The team revealed after the game that St. Brown did not suffer a concussion. This is excellent news for availability next week. He will pair with Josh Reynolds and Kalif Raymond.

Green Bay wide receiver Allen Lazard suffered a shoulder injury in his team’s Week 7 loss. After the game, he was spotted with his shoulder in a sling. The team was tight-lipped as to the exact nature of his injury. He seems sure to miss some game action moving forward. The team is extremely thin at receiver, with the Packers already missing Randall Cobb. Christian Watson may or may not return from his hamstring injury next week. The Packers may be forced to rely on Sammy Watkins and youngsters Romeo Doubs and Amari Rodgers.

Seattle wide receiver DK Metcalf suffered a knee injury in his team’s Week 7 victory. Pete Carroll and company have since revealed that the injury was to his patellar tendon. He will not require surgery, but it is impossible to tell how much time he will miss. Carroll is notoriously optimistic about his players when it comes to injuries. If he does miss time, the Seahawks will pair Dwayne Eskridge and Marquise Goodwin with Tyler Lockett. Seattle will likely look to increase the usage of their tight ends, especially Noah Fant, until Metcalf returns.

San Francisco wide receiver Deebo Samuel sustained a hamstring injury in his team’s Week 7 loss. Team officials have indicated he is day-to-day. Keep an eye out for reports of his practice status as the week progresses. If Deebo does miss time, the 49ers will play Jauan Jennings and Ray-Ray McCloud with Brandon Aiyuk. Tight end George Kittle and newly acquired running back Christian McCaffrey will likely soak up additional targets if Deebo does indeed miss game action.

Thank you for reading this article! Please be sure to join the #Nerdherd so you don’t miss out on any of the amazing things we have to offer Dynastynerds.com. Use my promo code DynastyHolliday for a 15% off discount. You will get rankings, extra podcasts, and access to our rookie film room. For just a couple of bucks more, you can get access to our revolutionary DynastyGM tool. So much for so little. Why miss out on all the fun? Also, you absolutely must check out our new mock draft tool. Find it in your Apple & Android app stores. Follow me @ReflipeWThenuz for more dynasty content and other musings.