There are always players that breakout every year in dynasty, but @DarthDbacks gives you some names to go get before they have their dynasty breakout in 2022, NFC North edition 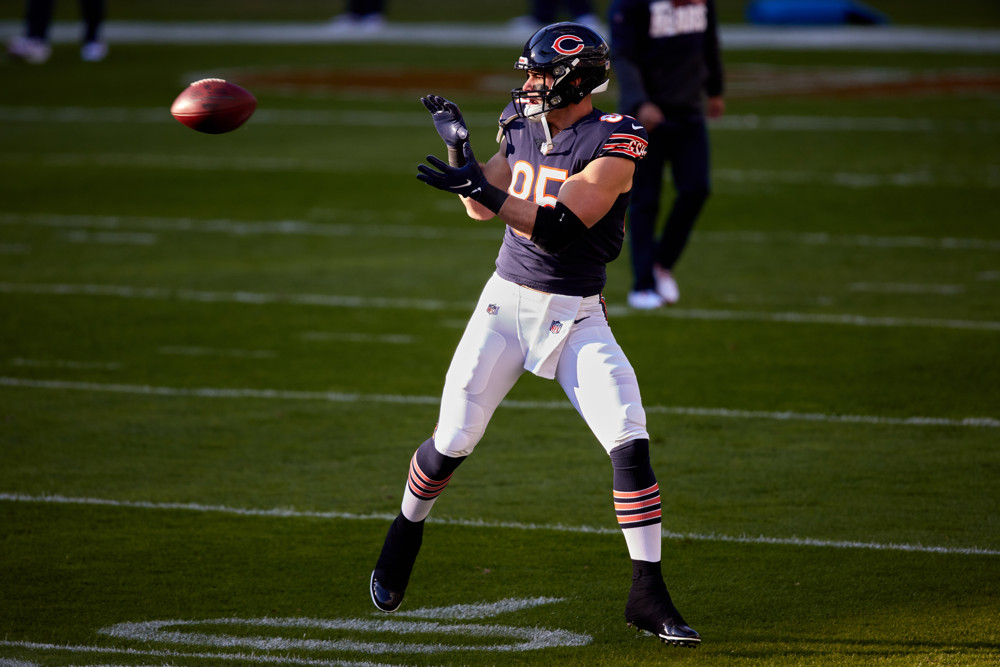 Every year in the NFL, players from all positions have breakout years that tell the world they are among the best at their position in football. Every breakout year matters for every type of player, but in dynasty, the focus is on skill players like a wide receiver, tight end, linebacker, safety, and so on. When dynasty breakout seasons occur, it could win dynasty players their league if they correctly acquired the player before the season started. You have a lot of value if you buy a player before they break out, like James Conner or Dalton Schultz. Getting the right dynasty breakout players before or very early in the season can change how your entire season goes. Here are some names to keep in mind in the NFC North.

Rodriguez was a sixth-round pick in this year’s draft, and all he has done is impress since. The rookie linebacker was taken with the idea of becoming a special teams player. Instead, he has kicked Jarrad Davis out of a job. He appears to be one of the team’s starting linebackers next to Alex Anzalone. In my opinion, it won’t be long until he becomes the No.1 linebacker. Rodriguez can dissect plays extremely fast. He’ll see what will happen before the play starts or during the play. Rodriguez has an intriguing mix of speed and intelligence. He plays way better than your typical rookie sixth-round pick.

While expectations should be managed, it wouldn’t be a surprise to see Rodriguez lead this team in tackles at the end of the year. He’s likely available off your waivers or for minimal cost. To acquire a potential LB1 on a team that will play defense a lot is always a smart move. It also explains why he will have an IDP dynasty breakout year. I wouldn’t be surprised to see him have LB2/3 numbers per week. Go grab the soon-to-be LB1 on the Lions and enjoy watching your league-mates complain about you grabbing him “too early.”

If I had to name just one player to break out this year in dynasty, it would be Kmet. He has all the makings of becoming a top-12 tight end in a dynasty. Kmet will be the second option in the Chicago Bears’ rebuilding offense. He’s shown a strong connection with young quarterback Justin Fields, who will rely on his tight end a lot this year. Last year, Kmet had a tremendous second season except for touchdowns. Due to Jimmy Graham’s presence, Kmet caught zero touchdowns. Graham is gone this year, so the red zone belongs solely to Kmet the Frog. Last year, he had 60 receptions on 93 targets for 612 yards.

This year, expect Kmet to get well over 100 targets. The only other part of the offense he has to contend with for targets is Darnell Mooney, who will lead the team by a healthy margin in targets. However, anytime the tight end is the second option in the passing game, you want that tight end on your team. That’s the case for Kmet this year. My projections this year for Kmet are 109 targets, 71 receptions, 702 yards, and five touchdowns. This would be equivalent to 10.1 PPR ppg. He’s a buy now as he’s only 23 and can be your dynasty TE1 for nearly a decade. I have him down for TE11/12 numbers this year. See if you can get him in a rebuild or as a contender. You’ll be happy you did. This year will be his dynasty breakout year.

Lazard has been playing wide receiver with Aaron Rodgers for a while. He knows what ARod likes and how to play with him. This has been proven evident by the fact that Lazard has scored 14 touchdowns and had over 109 receptions in his three full seasons playing with Rodgers. Last year was his best year yet. He had 40 receptions on 60 targets for 513 yards and eight touchdowns. He added on 32 rushing yards. Lazard is serving as the de facto WR1 for the Packers, so he’s fully set up to break out in his age-27 season. Rodgers likes Lazard in the red zone, which gives him even more value. While Romeo Doubs and Christian Watson have the likely future of serving as Rodgers’s future main targets. This year and next will most likely be Lazard. In that case, you want him on your team.

He’s an extremely cheap WR3 that will cost you a second-round pick. While he isn’t near Davante Adams’ skillset, Lazard is a good receiver. One can’t trust Sammy Watkins to stay healthy. Doubs and Watson are mysteries as to how Rodgers adapts to them. Or rather how they adapt to him. That’s why Lazard is set up to lead the team in targets and receptions. He will be a valuable flex piece for your dynasty team, which is way better than being on your bench like last year. I would love to have Lazard as a wide receiver on my team for depth if I am a contender. My projections for Lazard are 107 targets, 72 receptions, 935 yards, nine touchdowns, and 26 rushing yards. This is equal to 13.9 PPR ppg. Those numbers put him squarely into WR2/3 territory.

Smith was my pick to break out on the Vikings last year until he tore his meniscus and missed the entire season. However, that potential is still there this year, so on a team of vets, he’s my pick yet again to break out in the tight-end world. The last time Smith played was in 2020 when he supplanted Kyle Rudolph as the red zone tight end for Kirk Cousins. He had five touchdowns, 365 yards, 30 receptions, and 43 targets. I’m expecting a breakout year from Smith solely because he’s the TE1 on the team, and Tyler Conklin got 87 targets last year. If Smith gets 87 targets, he will be a high-end TE2 in 2022, even in a new offense.

The Vikings will be more pass-happy in the new offense than in years past. This is good news for Smith, who will see plenty of targets, especially in the red zone. Were Adam Thielen to miss any time, Smith would benefit greatly due to being the main target in the end zone. I have Smith projected for 81 targets, 58 receptions, 606 yards, and four touchdowns with an average of 8.9 ppg in PPR. He won’t be a league-changing tight end, but he’s a great bye-week or injury filler. See if you can acquire the 24-year-old tight end before he breaks out. Smith will be an excellent depth-tight end for a contender or a great TE1 for a rebuilding team.