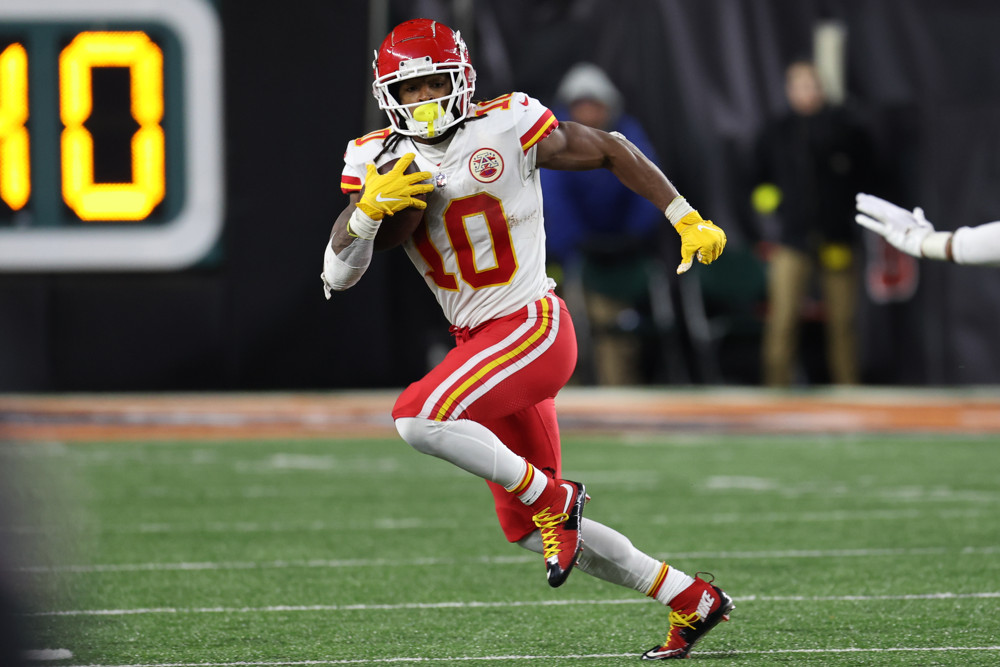 To keep our finger on the pulse of the dynasty community, I have included this week’s players with the most significant moves in value determined by consensus rankings. A value-above-replacement “Reserve” system derives player value. The system values a “start nine” non-SF 12-team league, along with each starter’s backup for a total of the top 216 (18*12) players. See my previous article on how to value players to understand this system further. The below summaries show the new value in dollars, the change in value in dollars, and the % change in value for each player. All scoring discussions will utilize the full-point PPR format. Note that rankings become available each Friday. There is a natural lag in this data which will not include the player’s current week’s performance.

Watson is the 20th receiver in PPG and the 37th-ranked WR on the season in PPR formats. He is the 28th dynasty-ranked WR. However, his season stats are skewed down from missing three games and playing limited snaps in Weeks 2 through 9. He has not seen double-digit targets all season, with a career-high eight in Week 10. However, in Week 10 and Week 12, he hit the century mark in yards on only four catches in each game.

Watson seems to draw Chase Claypool rookie season analogies. In his last four games, he had 15 catches, of which seven were TDs.  That is an unreal stat line. What’s even more concerning for future production is that those games with four catches are also his season-high catches. It will be unsustainable to score double digits in fantasy with four catches week in and week out. If we look at Claypool’s rookie season, we see a four-game stretch where he scored four TDs. During those games, he pulled in 21 catches. We saw what happened when Claypool had TD regression. Continued TD production makes for a very risky bet. We saw similar issues with Dawson Knox this year at the TE position.

KTC has him way overpriced at an early to mid-first. If we look to next year, I would expect significant TD regression. The QB controversy may continue with Rodgers now a year older as well and with inexperienced yet improved Jordon Love behind him. I have him valued at two seconds, similar to Aiyuk. Generally speaking, the market overprices this range of young WRs.  When they were both on the field, Watson was out-targeted by fellow teammate and rookie Romeo Doubs. If that is any indication, it’s possible a trade-down could be beneficial in cashing in that gain.

Dulcich is already the eleventh TE in PPG and the tenth dynasty-ranked TE. Poor and inconsistent QB play this year has hurt Dulcich.  Broncos head coach Nathaniel Hackett said the keywords any fantasy manager wants to hear for their TE. The broncos’ would be using Dulcich in “more of a wide receiver role.” His most recent outing saw six catches on eight targets for 85 yards. Dulcich has only one TD on the season, which is a lot for this offense. With the hopes of an improvement next year with a more secure run game, Dulcich can expand his role and see more red zone opportunities.

KTC has him priced at an early second. I believe he is currently valued at a third. I like Njoku more, which is currently priced less than Dulcich.  With Deshaun Watson back, this may be a steal. However, Dulcich may be a solid bet at a similar price point if you can’t make this happen. I would pay a third and a mid to late second if I needed startable depth at the position.

Pacheco is the 54th RB in PPG and the 34th dynasty-ranked RB. However, he has come on over the last four games with a 40+% snap share. Over this stretch, he has seen at least 16 touches a game, with a high of 23. He started the preseason garnering praise from the coaching staff, but it was uncertain whether he would truly see meaningful playing time. There was talk that he would start a game, but he didn’t see much playing time in the end. However, he may have worked his way into a committee with McKinnon while CEH is out. It is still unknown what the backfield will look like game to game, making him tough to depend on. He also sees little receiving work hampering his upside.

KTC has him priced at about the 2.01. I believe this is significantly higher than his current value. This is higher than James Cook and Devin Singletary, who I have ahead of him. Singletary is the lead back, and Cook has a higher draft pedigree, although they are tied to a poor RB situation. However, this price may be right at the first sign of a backfield takeover. It is currently too big a gamble for uncertain playing time this year and in the future.

Sutton is the 45th receiver in PPG and has fallen to the 36th dynasty-ranked WR. What started as a seemingly strong connection with Russ faded quickly. Over Weeks 6 to 8, Sutton caught six passes on 16 targets. This was terrible efficiency on even worse opportunity. After those three weeks, he did bounce back toward the floor we expected. Sutton also only has one TD catch on the season in what was drawn up to be a huge offensive attack coming into the year. As the WR1 on this team, he should have more TDs than a rookie TE who missed half of the season to injury. With a hamstring injury limiting his time in Week 13 and a likely missed game upcoming, his value will continue to fall.

KTC has him at an early second. If I can get that price, I may be tempted to sell and see if I can get a younger receiver to rebuild with. His value coming into the season has now fallen by a third. This is one of the tougher spots for fantasy managers to be in. If he can play at the level he should be, he is undervalued and should be held. He can be a solid flex or depth spot, but his ceiling appears limited, especially in this offense. At 27 years old, he is still young enough, but if this season is a bust, I am not sure I want to be holding a 28-year-old receiver who had one top-24 finish that’s now in his rearview mirror.

Looking ahead, I imagine Russell Wilson will self-correct at some point. If so, we should see at least a return to the numbers Sutton was putting up to start the season and a price increase to that of two seconds. I wouldn’t actively target him, but if I could land him for a late second, I would jump at that chance. Managers may be frustrated with him, especially now with a potentially lingering injury.

Allen sits in 30th place in PPG and is the 39th-ranked WR in dynasty. However, his PPG number is skewed as he was injured in Week 1, seeing only a third of the snaps. He saw a similar snap share in Week 7, where he was hurt again. Starting in Week 11 and for the first time in the year, Allen saw a significant snap share and was healthy. Over the three games he has played, he had 16 catches on 29 targets, with a pair of TDs to boot. He has a solid value for a contending team with nearly ten targets a game. These numbers are very much in line with his prior year’s top-10 finish in PPR formats.

KTC has him priced at an early second. I believe this is a fair price and potentially sneaky value. It may be tough to acquire shares of him now for a couple of reasons. First, most managers are likely pleased with his recent performance. Secondly, he is likely already on a contending roster. His upcoming playoff schedule should help a contender, with only Week 16 being a potentially tough matchup assuming the colts are still interested in finishing up their poor season. With his age already starting with a ‘3’, I can see less drop-off in the offseason. The opportunity to scoop him up for playoffs and sell off early next year at the same price is possible, allowing for a huge arbitrage opportunity.

Mooney sits in 65th place in PPG and is the 41st-ranked WR in dynasty. His value appears to be hampered by a run-first QB who, for the first time this season, has reached 20 completions and passing of 250 yards. Unfortunately for Mooney, this performance came while he was on IR with an ankle injury. This draws parallels to the Hurts run offense in Philly. However, while Hurts relied on his legs, he also showed the willingness to pass first with multiple games of 35 or more attempts. I don’t see that volume coming out of Chicago, and until we do, it’s unlikely anyone other than Fields will have value on this team.

KTC has him priced at an early second as well. While I agree that this is fair value, I would much rather have Sutton, who has shown at least some semblance of a floor, or Allen, who has demonstrated his ceiling even at 30 years old. There will likely be opportunities down the road to acquire Mooney if and when Fields shows his ability to be a consistent passer. Until then, I would hold off on Mooney even at fair value.