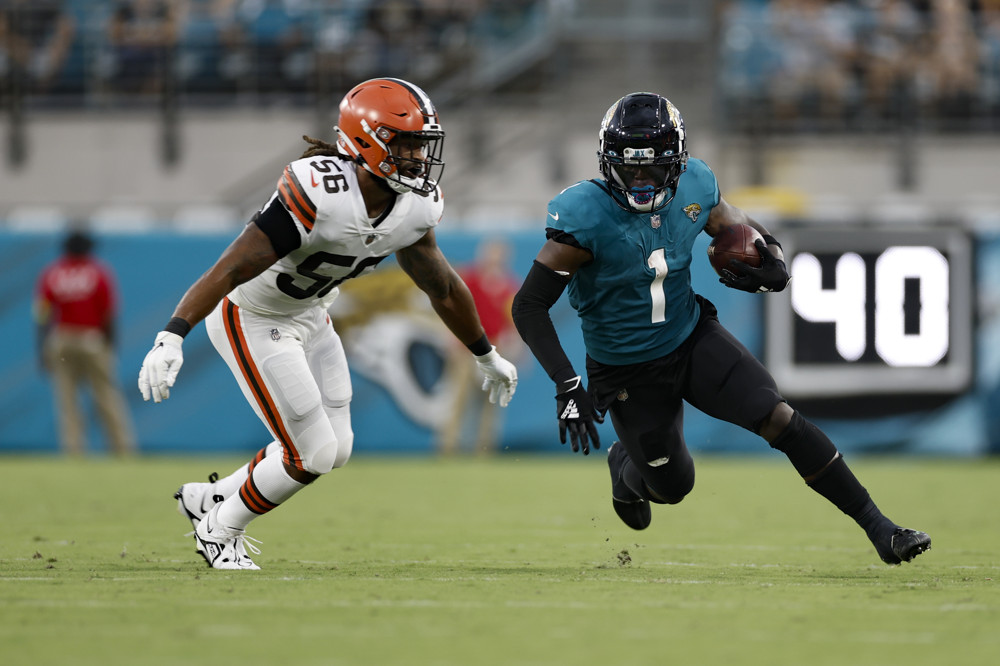 To keep our finger on the pulse of the dynasty community, I have included this week’s players with the most significant moves in value determined by consensus rankings. A value-above-replacement “Reserve” system derives player value. The system values a “start 9” 12-team league along with each starter’s backup for a total of the top 216 (18*12) players. See my previous article on how to value players to further understand this system. The below summaries show the new value in dollars, value in dollars, and % change in value for each player. Note that rankings become available each Friday. There is a natural lag in this data which will not include the player’s current week’s performance.

Etienne struggled somewhat in the preseason. He is now gearing up for his first official NFL regular season after suffering a preseason Lisfranc injury last year. His value quickly fell in half at the time of his injury and has since increased back to his pre-injury value. Many thought James Robinson would be slow to recover from his Achilles injury. Instead, he is now set to share snaps in Week 1. He is at about the average value for his fantasy rookie draft capital at his current cost. As a player, he has tremendous upside, but as a value, we missed our chance if we didn’t scoop him up after the injury last year.

Walker will likely not be the featured back to begin this season. As the second rookie RB off the board in most drafts with early to mid fantasy draft capital, he is still below the expected rookie value. He should have room to continue rising in price throughout the season. Walker can still be seen as a target at this point.

Pierce continues to rise sharply in value with the waiving of Marlon Mack, leaving only Rex Burkhead in competition for snaps. This fourth-round NFL draft pick has elevated his fantasy value handily above a second-round rookie pick. He has been seen in trades straight up for a first-round pick. Even at his current cost, which already exceeds his expected pick value, a young RB with this opportunity can be worth the risk of overperforming.

Allen has perennially been a top WR. While still likely to perform better in redraft than fellow wideout Mike Williams, the dynasty community is higher on Williams. At 30 years old, Allen is likely nearing the end of his productive years, so there isn’t much value even at his current falling price.

Cooper’s value has been trending down since the ruling on Deshaun Watson. With a backup QB for most of the season followed by a likely rusty Watson, the 28-year-old may underperform this year. Cleveland is expected to rely heavily on its strong run game, reducing Cooper’s ceiling. At his current dynasty value, however, he is still one of the better redraft values in this range.

Thomas was a dynasty stud up to his injury in 2020. After sitting out all of 2021 and dealing with hamstring issues in the lead-up to the 2022 season, dynasty managers are still tentative. He has the potential to overperform at the price of a second-round rookie pick. However, we have seen older receivers dealing with injuries in the past begin to fade quickly. At his current cost, I would be willing to take a chance on a return to greatness.