Devy prospect on the move! Alabama WR Agiye Hall has officially entered the transfer portal and @FF_Hulsey is here to break down the most likely potential landing spots. 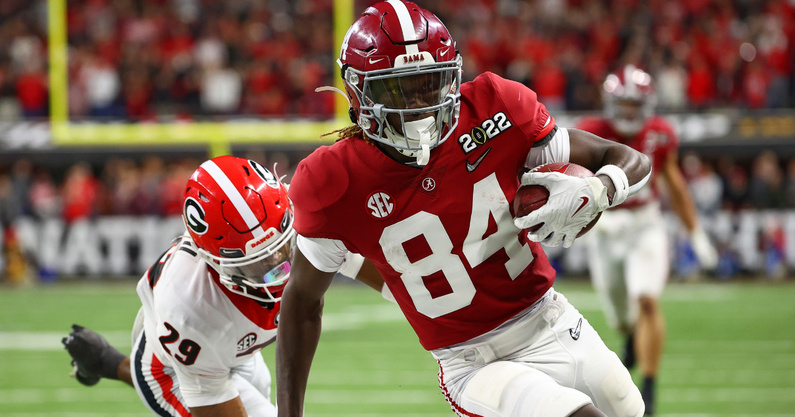 Alabama wide receiver Agiye Hall entered the transfer portal Thursday afternoon following his suspension for violating team rules. This came after a wave of speculation earlier in the week when Hall was removed from the team’s online roster.

Hall’s brief stay in Tuscaloosa was turbulent, to say the least. The Florida native took to Twitter to air his frustrations with cryptic tweets last fall. One post indicated he may be quitting the team after a game against Mississippi State. Despite this, Hall was more involved in the National Championship against Georgia than in any game all season. He caught two of his seven targets for 52 yards and a touchdown in Jameson Williams’ absence.

The departure of Williams and John Metchie III led many to believe Hall was in line for an increased role in 2022. Reports of Hall bulking up to around 210 lbs in the offseason had Devy managers hopeful that he was ready to join the top tier of receiver prospects. Expectations have been remarkably high considering the pedigree, Alabama’s NFL WR factory, and his performance in the 2021 Alabama Spring Game.

There will surely be several Power 5 programs looking to add Hall to their receiving corps. Nearly every powerhouse program in the country recruited the former four-star recruit. Ultimately, he chose Alabama over LSU, Georgia, and Arizona State. Those schools will be eager to get another crack at landing Hall, among many others. Hall is an elite athlete with a well-built frame, all the physical traits to be a top-tier receiver, plenty of long speed, and the ability to separate. He certainly has room to improve as a route runner and you can’t help but question why things didn’t work out for him at Alabama. Wherever he lands, he should have every opportunity to make an impact in 2022 and rehabilitate his Devy stock. Here are some of the most likely potential landing spots for Hall.

Agiye Hall in Austin makes so much sense. If I was setting the odds, Texas would easily be the early favorite to land the former top-50 recruit. The Big 3 of Quinn Ewers, Bijan Robinson, and Xavier Worthy has this Longhorns offense set up for immediate success. Their receiving unit is deep but lacks a clear WR2. Jordan Whittington may finally be in a position to break out, and Troy Omeier is in line for an impact role, but these guys seem more like 3’s than 2’s in a top offense. Texas was in Hall’s top seven teams back in 2019. I wonder if this coaching staff would be more or less apt to bring in another player with off-the-field concerns. They recently added former Alabama tight end Jahleel Billingsley under similar circumstances. Imagine Ewers stretching the field with a Worthy/Hall duo.

Shortly after rumors started to swirl about his name being removed from Alabama’s online roster, Hall liked the tweet pictured here from the USC Football Twitter account that self-proclaimed itself “WRU”. Modern recruiting is fun, yeah? Of course, this only fueled speculation that Lincoln Riley may target the receiver again, two years after missing out on Hall during his time at Oklahoma. USC’s high-powered offense has been completely rebuilt with Caleb Williams at the helm. It shouldn’t shock anyone if Riley looks to make another high profile splash. Hall was previously interested in another Pac-12 team in Arizona State so he doesn’t seem opposed to the move geographically. The team has already added transfer Mario Williams and freshman C.J. Williams to a fairly experienced receiving unit. I question whether this would be an ideal fit in terms of available targets.

Because why not? Ole Miss has pushed its chips to the center of the SEC table with the additions of Jaxson Dart, Zach Evans, and Michael Trigg via the transfer portal. The one offensive position that may still need reinforcements from the portal is wide receiver. Jonathan Mingo is currently the top option in the offense, followed by a lot of uncertainty for that second spot. Hall could easily carve out an impact role in this group. This would also mean an opportunity to compete against his former team in November. The SEC eliminated its intra-conference transfer rule in 2021, so Hall can transfer to a conference team and play immediately in 2022.

Hall is a Florida native and the Gators are in need of impact players following a disappointing 6-7 season. Anthony Richardson is a potential star but his upside will be wasted without a supporting cast. Just last week Billy Napier said the program will be very aggressive in the transfer portal because of their need for players. Florida will likely go after Hall with a full-court press.

Here is yet another Florida team in dire need of help at wide receiver. Mario Cristobal’s Hurricanes have a sneaky dangerous offense with Tyler Van Dyke, Jaylan Knighton, freshman TreVonte’ Citizen, and a talented group at tight end. Receiver is a massive question mark right now though with Key’Shawn Smith being the presumed WR1. Miami may be the only team on this list that could offer Hall a true opportunity to become the passing attack’s top target right away.

Become a member of the #NerdHerd today and gain access to the Prospect Film Room, members-only podcasts, Nerd Scores, full rankings, and more for just $4.99 per month. Check out my complete Devy rankings immediately after signing up (Agiye Hall No. 59 overall). Make sure you use promo code FF_Hulsey to take 15% off your membership cost.