@DavidZach16’s flagship Fantasy Z-Score model that brought you draft gems like Antonio Gibson and Justin Jefferson last year is back! Now we turn to the 2021 WR class 👇 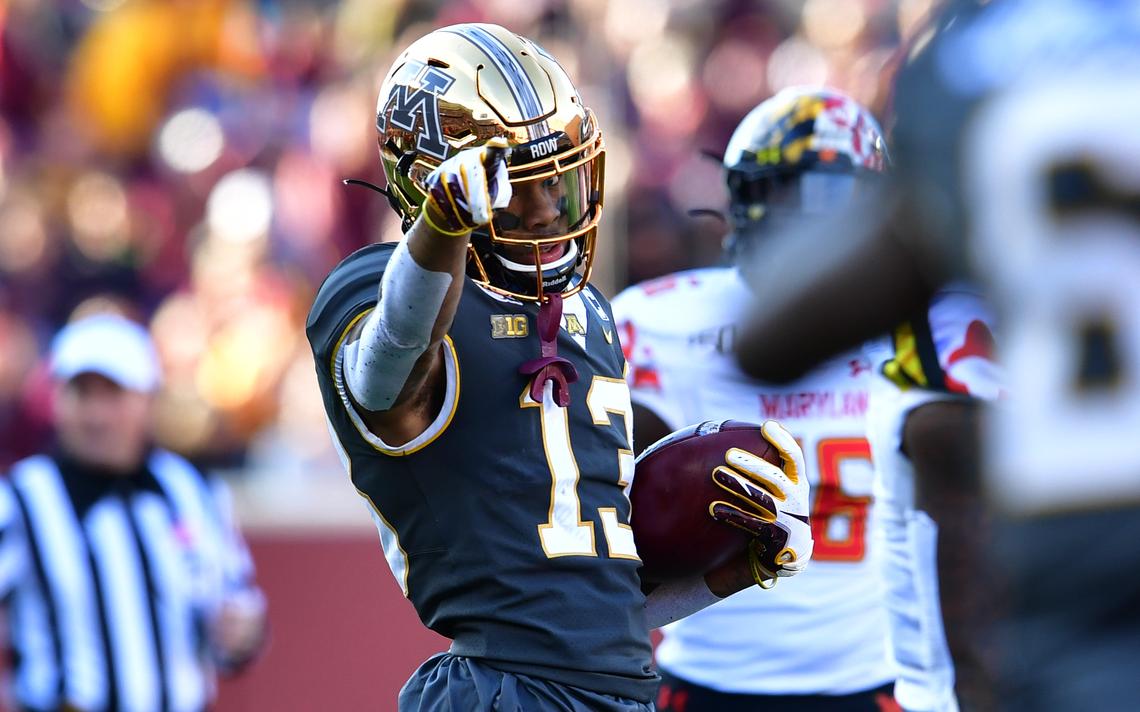 Welcome back to the Fantasy Z-Score! A statistical breakdown of what metrics matter most for predicting future fantasy production. Last week, we went over running backs which you can find here:

In its third year publicly being posted, the WR Z-Score has continued to increase accuracy and predictability in finding player values and pitfalls in receiver profiles. I hope it can continue to serve as a mainstay of foundational analysis in your rookie draft preparation.

Method behind the Madness

Unlike the RB Z-Score that had some updates, the predictive categories remained constant in the WR Z-Score from last year, as no new metric correlation I found stood out enough to consider an addition.

While no one stat is perfect, the combination of all gives us a promising analytical chance at finding successful players. The following five categories were inspired by a combination of myself and some leading minds in the fantasy industry. Together they make up a player’s Z-score.

Each final letter grade represents what echelon of PPG that player falls into. (E.g. an age 18 breakout age grades as an A). Please follow the resources mentioned below if you want a more detailed explanation of these categories.

Breaking down each category, we can understand their usefulness. As with any position, draft capital is self-explanatory. The higher the selection, the better the player likely is and the more investment from the team to ensure they succeed.

Early declare shows that the level of interest is strong for players considering a final year of college to enter the NFL draft early. It’s also a testament to a player’s talent, as better players are sought after more fervently by scouting departments. This was a metric @LordReebs broke down in further detail here:

Career production is the most meaningful category in the Z-Score next to draft capital. Average Yards Per Team Pass Attempt had the most substantial single stat correlation to fantasy points in my database, essentially tying draft position. These were collected from the database of Peter Howard found @pahowdy.

I have also found that the dominator rating per game of the final two seasons shows more meaning than the traditional dominator (final season and best season). Still, often, these naturally happen to be the same.

When looking for players that stood out most on their team, team adjusted market share was a critical variable to consider. This not only highlights players who dominated on their team, but how good that production was relative to the overall team strength.

Next up is breakout age. While breakout age is somewhat baked into early declares and early college production, it gives another perspective because some players enter college older/younger than others. It also tells us the exact year they excelled, which may get lost in career arcs with hyper-efficient final seasons.

Last but not least are physical measurements. Physical measurements alone surprisingly carry more weight than combine athleticism for wide receivers. Hand size, height, weight, and arm size are the most important measures, but hand size carries the most weight and thus is shown in the grades.

In the past seven years, draft capital itself has a historical R-squared of 0.255 to three-year PPG, compared to an R-squared of 0.419 for the Z-Score.

Remember, these are three-year projections for PPG starting from year 2, not solely rookie year success. Playing the long game is crucial for wide receivers, considering their value remains much longer than the short-lived running back career arcs. So for year one rookie rankings, defer to my redraft rankings when released with FantasyPros.

Without any further ado, let’s dive into the 2021 rookie class.

This class has some incredible top-tier talent in what I am calling the big 3 of Chase, Bateman, and Devonta. The middle tier is impressive, especially considering you can collect players like Elijah Moore and Terrace Marshall in the early-second round of rookie drafts.

Below you will find each player’s Fantasy Z-Score rating, a snapshot of their profile grades, and their current consensus ADP. In addition, a full summary of the 2021 class all in one chart is included here for your viewing pleasure: 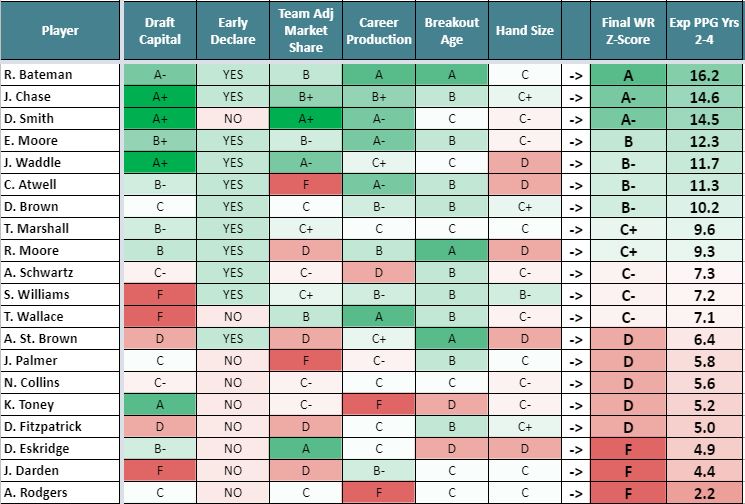 Nearly everyone in the fantasy world will say this is an incorrect ranking of having Bateman over Chase. I try to remain as objective as possible and let the Z-Score model reflect its predictions as honestly and accurately as possible. After all, it was pretty accurate on wide receivers last year, boosting Justin Jefferson, fading Henry Ruggs, etc.

While I believe Chase is the WR1 of this class, it is impossible to ignore the upside of Bateman’s profile. He checks every single box you could want from a prospect, as shown in the chart above, except one in that he played at a lower competition school in Minnesota. That is the only blemish on his profile. Otherwise, his draft capital, production, breakout age, size, and market share are all among some of the best in class.

In addition, there is fiery debate over whether the landing spot in Baltimore is positive or negative. On the positive side, Ravens are in desperate need of an alpha WR – who this model clearly believes Bateman is – and he should fill into the top receiving role in the offense almost immediately.

On the negative side, the Ravens have passed the ball at the lowest rate of any team in the league year after year since Lamar Jackson became the starter. This makes passing volume a legitimate concern with Bateman for the foreseeable future and deflates his current ADP cost.
In light of his profile and circumstances surrounding him, I still believe Bateman is a massive value at cost with an upside in the range of some of the best wide receivers in the league. The best part is a suppressed ADP to mitigate the cost of acquiring a possible elite fantasy producer for years to come.

Chase shattered records at LSU with his legendary sophomore season, putting up stat lines no other receiver had done in years at his age. He is undoubtedly elite in many facets and has the safest, highest floor of any receiver in this class. His draft capital is a testament to and reflects these facts.

Foregoing his junior season put a hitch in the model’s analysis. He had one elite season in his sophomore season, a decent but low volume freshman year, and no other stats to go off of. Had he replicated even close to his sophomore season if he played his junior year, his profile would’ve matched the likes of Amari Cooper and Odell Beckham. This stat line missing drops his grades ever so slightly because no assumptions can be made in crucial elements to his profile as a whole. We can only use what we know.

Regardless, Chase is an elite prospect and deserves the top WR selection in rookie drafts. The Bengals will boast one of the best-receiving groups in the league with Chase, breakout sophomore Tee Higgins, and perennial producer Tyler Boyd. Joe Burrow will have plenty of options this fall.

Anyone who has watched Smith play knows he is special. The reigning Heisman winner destroyed his competition playing with Alabama and boasts one of only three “A+” team adjusted market share grades in a decade. The other two most recent to achieve the same grade? DJ Moore and Amari Cooper. Some elite company to be in.

Smith has the most polarizing profile in the analytics community in recent memory for a top-end prospect. He is pretty small at 166 pounds, had a late breakout age, did not declare early, yet broke records his final season, and was one of the few wide receivers in history ever to receive the Heisman. He is the ultimate risk/reward receiver on this list, and you need to decide for yourself what you value most in a receiver’s profile.
Landing with the Eagles should allow him to slot in as their WR1 without question. An immediate opportunity is there as he pairs up with old teammate Jalen Hurts, and he’ll have all eyes on him as the Eagles are desperate for some spark in their passing game.

Elijah has one of the more pleasant all-around profiles in the class. Above average in all categories except size, including solid young production. Coming in at the Z-Score WR4 but an ADP of WR6 makes him the second-best value of the class behind only Bateman.

There are about a million questions surrounding Moore and the Jets this year. New coach, new rookie quarterback, a flush of new wide receivers, and he will likely be rotating with Jamison Crowder for snaps in the slot to start. Despite all the questions, with a profile this good, does it matter?
Elijah is my top target for the 1-2 turn in rookie drafts.

The Z-Score does indeed account for production on a per-game basis, so do not feel that Waddle is short-changed based on missed games as it is baked in. Strong draft capital, an early declare, and outstanding adjusted market share is countered with an average career arc and breakout age.
Waddle is projected by many to secure the slot role in Miami, so his early success will depend on both Tua’s development as a passer and scheme fit in the passing game. Some NFL scouts even touted Waddle as the best receiver in the class over Chase. That is some high praise, but the profile suggests he may be going just a little too high in rookie drafts.

The remaining receivers can be found in the overall chart listed above. They are all a solid tier below these top-9, and their projections can give you an idea of what to expect.

I hope this breakdown was helpful for you to find the stats that matter most when researching your rookie wide receivers for the upcoming season. Remember that projections are only a portion of what to consider when evaluating a prospect. Landing spot, coaching tendencies, and the supporting cast also play significant roles.

Thanks for reading, and stay golden! If you like what you learned, follow me @DavidZach16 for more interesting stats and tidbits throughout the year.