@FantasyContext dropped his latest first round mock draft this week. Now @DanT_NFL is here to tell us what it means for our dynasty squads! 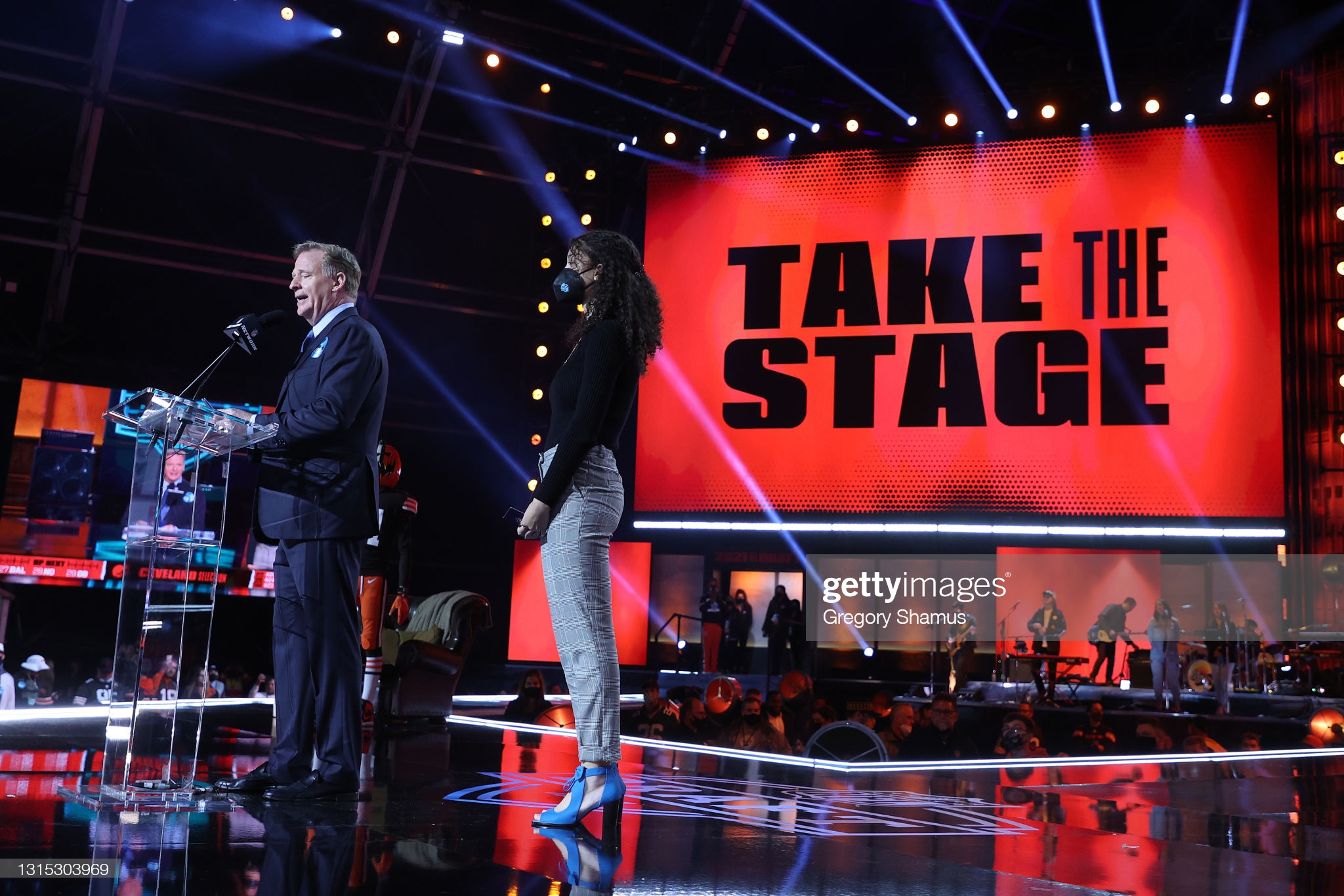 We are less than a week away from the 2022 NFL draft and the mock draft season is almost at an end. Dynasty fantasy football managers will be on pins and needles for the next ten days. Rumors and stories are all over the place about where players will land. Raju Byfield, @FantasyContext, is here with his second first-round mock.

In this mock, we see 16 offensive players go in the first round, with nine of them being players we can plug into our fantasy football lineup. This class has been touted as weaker than usual at the quarterback position, and this mock confirms that. We also see no running backs taken in the first round. The league has been trending this way for several years, but 2023 might shake things up.

Let’s look at these fantasy-relevant players and landing spots without further delay. All will be first-rounders in your dynasty rookie drafts, so getting familiar with these names is a good idea. If you wish to read the entire first-round mock draft, check it exclusively on DynastyNerds.

Mock drafts see the Detroit Lions taking as many as five or more different players. In this mock, we see the Lions grabbing their potential franchise quarterback. This landing spot will allow Malik to sit and learn. Jared Goff is more than capable of starting for most of the season. Dan Campbell would handle the transition would remain to be seen, but I don’t foresee them throwing Malik out there in week one. This landing spot would cement Malik Willis in as the QB1 for this dynasty draft class but would still land him at 1.02 in my Superflex rankings behind Breece Hall.

This year’s draft is very intriguing for the wide receiver position. With teams at both the front and back of the first round needing help, we can see a case where the better players wind up in worse landing spots while the second tier of players winds up in worse landing spots. New York gets a WR1 for Zach Wilson. Wilson is the first WR taken in this year’s draft and will see the field right away alongside Corey Davis and Elijah Moore. Sorry Denzel Mims fans. According to PFF, unfortunately for Garrett Wilson, Zach Wilson ranked as the least accurate passer last season. Hopefully, the Wilson to Wilson connection can elevate the quarterback’s game.

The second wide receiver off the board will be USC’s Drake London, who lands in Philadephia with one of their two first-round picks. The 6’4” and 213-pound wideout dominated in the 2021 season until suffering an injury after just eight games. London is fully healed and will be a full go heading into summer rookie camp. Like Wilson on the Jets, London’s landing in Philadelphia is less than ideal quarterback-wise. While better than Zach Wilson, Hurts still ranked in the league’s bottom half in passing accuracy. However, London is used to this coming from USC, where Kadon Slovis saw a significant regression in his play this past season.

Was this the reason the Saints traded for a second first-round draft pick? Did they have aspirations of moving up again for Malik Willis? Is Sam Howell just a consolation prize? We may never get the correct story, but it will keep the NFL media machine fueled for months with storylines. Many said that Sam Howell might be the most pro-ready rookie quarterback going into this draft. Now he has the opportunity to prove it. Hopefully, Trevor Penning, who the Saints selected three picks before Howell, can serve as a decent replacement for Terron Armstead. Current starter Jameis Winston is still recovering from a torn ACL but plans to be ready for week one. Could Howell push him for the starting job? It will be an exciting battle to watch shake out this summer.

With five of the final ten picks of the draft being wideout, we must now weigh how much stock we will be putting into draft capital versus landing spot versus prospect profile. Jameson Williams is the first WR kicking off quite an impressive run at the back end of the draft. For Jameson, he would slide in as the de facto number one option for this Green Bay offense. There is one issue with that. Jameson Williams tore his ACL in the National Championship game just a few months ago. Williams has said that he hopes to be ready for training camp, but that would be at the early end of this injury’s recovery timeline.

This pick may be the easiest to project in the first round. Cowboys owner Jerry Jones is an Arkansas alumnus and still has robust ties to the university. With the departure of Amari Cooper and Cedrick Wilson, the Cowboys need another young wide receiver. The stars are aligning almost too well in Dallas. This selection would give Dallas both CeeDee Lamb and Treylon Burks as their starting two wide receivers. Wide receiver depth is vital; Dallas ran the sixth most personnel packages that involved three wide receivers in 2021.

Green Bay double dips at the wide receiver position in this mock draft. This time they selected Jahan Dotson out of Penn State. The starting lineup for the Packers’ week one would be some combination of Randall Cobb, Sammy Watkins, Allen Lazard, and Jahan Dotson. If Jameson Williams were to be healthy by then, he would also claim a starter role. These selections would likely signal a lost season for at least one Green Bay wide receiver. Cobb has the connection with Rodgers, and Watkins has the money. So, unfortunately, this could be the last we see of Allen Lazard.

The departure of Tyreek Hill has left a large hole in this Kansas City offense. One that Chris Olave will now have to attempt to fill. The good thing is the Ohio State prospect has plenty of speed. He was clocked in at 4.39 officially at the combine. Although, the initial unofficial time was a blazing sub 4.3 40. Wheels like that will hopefully reinvigorate the Kansas City passing attack. The offense will surely need to take a step up to compete in the AFC West. The AFC West is a division that has seen nothing but upgrades. Everywhere besides Kansas City, that is.

With the final selection in the first round of the 2022 NFL draft, the Detroit Lions select George Pickens. Pickens is a 6’ 3” 200-pound Junior at the University of Georgia. After his first year, he was a one-time devy darling and projected to be the WR1 of this class. Unfortunately, Pickens tore his ACL during the Georgia spring game last year and spent most of 2021 recovering. Being more than a year post-surgery now, you have to imagine he has regained his former athleticism, or at least that is what Detroit hopes. George Pickens will join a team with DJ Chark, Amon-Ra St. Brown, and not much else at receiver. He could project as a week one starter to pair with rookie quarterback Malik Willis.

Want to check out our film room? Make sure to subscribe to the #NerdHerd, where you get exclusive content, dynasty/rookie rankings, and DynastyGM! Additionally, if you want 15% off of ANY SUBSCRIPTION, USE PROMO CODE ‘LUNA’ or CLICK HERE.