North Dakota State’s Christian Watson was all the buzz at the Senior Bowl, what does Andrew Harbaugh think of Watson’s NFL prospects? 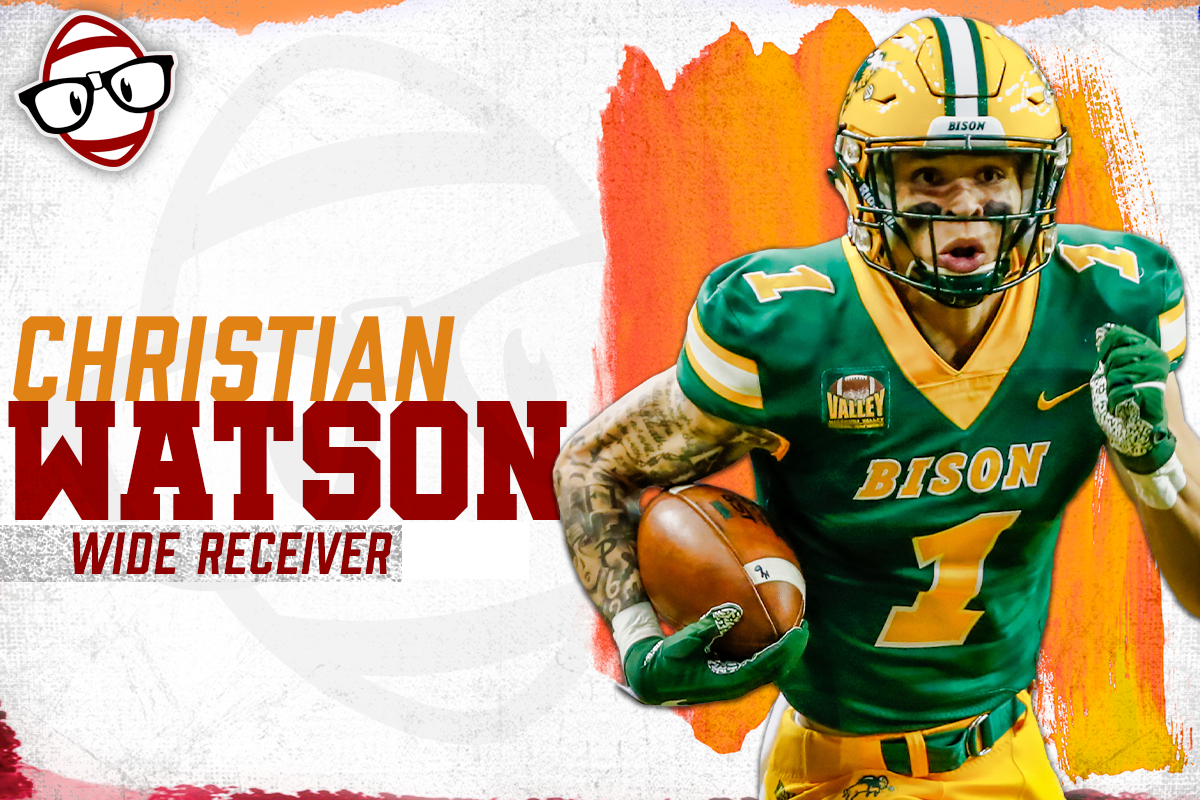 Over the last couple of years, we have seen a steady influx of players from the Missouri Valley conference in the FCS, most notably North Dakota State. They have produced the like of Carson Wentz, Easton Stick, Jabril Cox, Dillon Radunz, and most recently Trey Lance, and they are about to add another.

Christian Watson had the attention of the NFL and its teams before this past week’s Senior Bowl, but now everyone on draft Twitter has realized what they have been missing out on.

Christian Watson from NDSU is having a nice day. Here’s a tough catch by him. pic.twitter.com/UwWUx2RI6t

It is important as you catch up on the big-bodied and speedy receiver for the Bison that you know exactly what he brings to the table. There is a lot more to his game than just burning people and snatching souls on the field of Senior Bowl practice.

The latest installment of our continued rookie profile series continues.

The top three receivers of the 2017 recruiting class were Donovan Peoples-Jones, Tee Higgins, and Jerry Jeudy. When you scroll through 247 to see those rankings, you have to wait till the 501st wide receiver to see Christian Watson’s name.

He had a two-star rating coming out of Plant High School in Tampa Bay, Florida, and just one offer, North Dakota State. Watson would make the most of that offer while fighting his way up the roster and proving he was more than a special teams player.

Watson was redshirted his first year, but after that, he was able to earn some meaningful reps while making an impact when given a chance. He didn’t make many plays, but between receiving reps and special teams’ work, he made the most of his time and set himself up for success the rest of his career in Fargo.

In the next three years, Watson would accumulate significant touches and impact as a receiver in a run-first offense. He would earn several Missouri Valley honors like players of the week and first and second-team honors, not to be capped off by a first-team All-American season in 2020. This past year he would be a leading receiver on a national championship roster for the Bison, and in the end, Watson would earn a Senior Bowl invite. As mentioned, of course, he would see his draft stock skyrocket to where it sits presently.

The speed he possesses with his size is something that shouldn’t be possible, but here we are. People down in Mobile have rumbled that he may run a 4.3 in the 40-yard dash in March’s Scouting Combine. If he does that, people may lose their mind over the kind from Florida.

He plays with his speed, though, is impressive by itself, but when you see him do it in a game and how it allows him to have three to five yards of separation from defensive backs. I can’t recall seeing someone with speed to pull away from guys on runs like that since Mike Wallace. Wallace was shorter than Watson, so speed paired with his height leads us to the next strength.

While he came in shorter than what North Dakota State listed him at, he still came in over 200 pounds and over six-foot-three, which is an excellent size for an NFL receiver. He went from being a skinny high school kid listed at 175 to filling out that frame and giving him an advantage over many in the college game.

Tonight I am doing a full 2021 target contextualization on NDSU WR Christian Watson and came across this TD catch midway through the season #Steelers #NFLDraft pic.twitter.com/94Zf7W7sfR

No one is perfect despite how much we have hyped up Watson, and he does have areas to improve upon. He needs to refine his route running as he has a decent route tree, but he doesn’t have footwork and hip movement. Most coaching staffs have to teach route trees to college receivers their first year, so with Watson having decent knowledge in that area, it allows him to refine that route running.

Also, learning to hand fight so that Watson can have more than one tool to separate from corners would go a long way in his game. These small things can be taught and retained pretty easily during a rookie season.

The bottom line, landing spot is going to be huge for him.

Watson can contribute right away and make an impact as a WR2-3 on a team is feasible. What that means for fantasy again depends on the landing spot. In a pass-happy offense, he can be worth a high pick, so for now, his ADP is probably all over, but when you get a chance to grab a share, do it. He will be someone who breaks out, most likely in his second year, be patient and roost the rewards.